A number of pressing crises loom over this year’s World Economic Forum annual meeting currently taking place in Davos—including the tumbling price of oil, an upcoming election in Greece that could deliver a blow to a still fragile European Union and the recent terrorist attacks in Paris—but the event also provides the world’s thought leaders with an opportunity to discuss reasons to be hopeful in the coming year.

That was the focus of a lunch discussion hosted by TIME on Wednesday, during which participants identified global bright spots in the fields of science and technology. The event, moderated by TIME Editor Nancy Gibbs, featured portrait photographer Platon; Reid Hoffman, founder of LinkedIn; Jennifer Doudna, professor of chemistry and of molecular and cell biology at the University of California, Berkeley; and France Cordova, Director of the National Science Foundation.

Gibbs opened the event by noting that journalists at TIME cover the challenges and crises the world faces, “but if we don’t also look at progress, at the quiet or noisy explosions of creativity, of innovation, of invention, then we’re going to miss the story.”

Cordova, an astrophysicist who was previously President of Purdue University in Indiana, spoke about the importance of the National Science Foundation’s role in funding what she called “basic” research. “All innovation is based on discovery,” she told the gathering, adding that she expected “breakthroughs to be made in our understanding of the 95% of the universe that we don’t know about.”

Hoffman’s hope for the coming year centered on the digital currency, Bitcoin, which he said could open up the advantages of banking to regions of the world that do not yet benefit from the banking system. He envisaged Bitcoin’s potential impact on the developed world also; for example, the currency might make easier all financial transactions related to driving, including paying tolls and paying for parking. “Bitcoin will either be a total failure or it’ll be a success and I think we want it to be a success,” he said.

Doudna, a celebrated biologist and biotech entrepreneur who, along with her colleagues, made major progress in something called CRISPR/Cas9—a technique for editing genes that his widely recognized as a game-changer in medicine, said that she hoped to see artists and scientists work together more, in part to help scientists explain their work better.

Platon, a British photographer who has shot numerous cover images for TIME and other magazines, told of how he met with former National Security Agency contractor Edward Snowden in a Moscow hotel room—where Platon shot Snowden’s portrait—and how Snowden resisted labels when Platon asked him if he was a patriot or a traitor. “Don’t get bogged down with labels. Don’t get bogged down with picking teams,” Platon said Snowden told him.

The photographer then offered his wish for the year ahead: “Perhaps what I hope will happen in this year is that people will come together, that people will be less frightened of each other. We need to celebrate the shared experience of enhancing different ideas and perhaps we might learn from someone who thinks differently.” 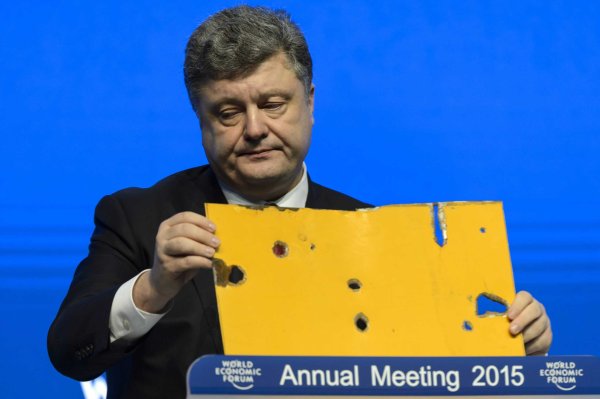 Ukrainian President Pleads for Western Aid at Davos
Next Up: Editor's Pick