There wasn’t much room for more responses to President Barack Obama’s State of the Union address after five different Republicans were set to offer formal rebuttals Tuesday night. But potential candidates in the 2016 presidential race still managed to squeeze into the mix.

Republican former Govs. Jeb Bush of Florida and Bobby Jindal of Louisiana were among many White House hopefuls who took to social media to air their responses.

In an Instagram video, Bush called for less divisiveness on tax policy. “This nation needs to create economic opportunity for all Americans,” Bush said. “It’s really sad that President Obama wants to use the tax code once again to divide us.”

Jindal tweeted his response to the State of the Union, which drew the attention of many, but likely not for the reason he’d hoped. “I’ll save you 45 mins. Obama will decry Republicans, beat up on private business and argue for more ‘free stuff,’” Jindal wrote, before ending the tweet with a glaring grammar mistake.

Former Virginia Democratic Sen. Webb, who has largely stayed below the fray since launching an 2016 exploratory committee in late November, live-tweeted the State of the Union, sharing his ideas for criminal justice reform and criticizing the President’s actions on foreign policy and national security.

Wisconsin Republican Gov. Scott Walker tweeted a response, issued a statement and also made an appearance on MSNBC’s Morning Joe to talk about the President’s address. “Our American revival is not going to be led by a lame duck president who would rather pick fights with Congress,” Walker said in a statement. “”It will be led by reformers who know how to get things done.”

In a lengthy Facebook post, two-time Republican presidential candidate Mitt Romney, who is considering another campaign in 2016, said the speech was proof that Obama is “more interested in politics than in leadership.”

“Rather than bridging the gap between the parties, he makes ‘bridge to nowhere’ proposals,” Romney wrote. “Disappointing. A missed opportunity to lead.”

Kentucky Republican Sen. Rand Paul issued a pre-recorded video response to the State of the Union. “The President is intent on redistributing the pie, but not growing it,” he said. 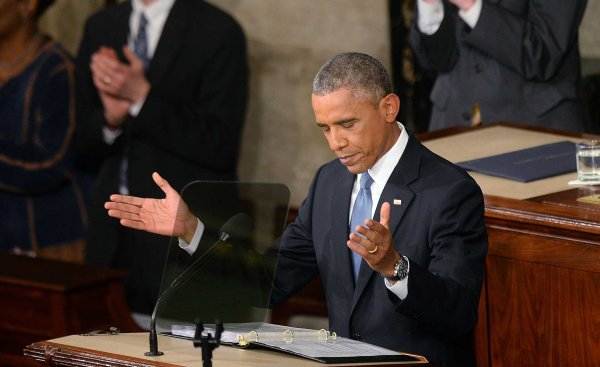 These Are the Funniest Memes From the State of the Union
Next Up: Editor's Pick