When an online video surfaced Tuesday showing the Islamic State of Iraq and Syria (ISIS) threatening to kill two Japanese hostages, relatively little was known about the relationship between the two prisoners. But Reuters revealed Wednesday that war correspondent Kenji Goto had in fact returned to Syria in late October to rescue his friend Haruna Yukawa, who was captured by ISIS a few months earlier.

Yukawa reportedly went to Syria as part of an attempt to get his life back on track after dealing with bankruptcy, the loss of his wife to cancer, and an attempted suicide. Goto, 47, a respected Japanese freelance journalist, went to Syria to cover the civil war.

After the pair first met in April, Yukawa asked Goto, who had years of experience of war zones, to take him to Iraq. Yukawa returned to Syria in July, while Goto went back to Japan. But when Yukawa was captured in August outside Aleppo, Goto was troubled by his disappearance and decided to go back in October to try and help.

Friends say Goto traveled from Tokyo to Istanbul and that he sent a message on Oct. 25 to say he had safely crossed the border. In a short clip recorded before he set out for the ISIS-held city of Raqqa, he told the camera: “Whatever happens, this is my responsibility.” That was the last he was heard of until this week’s ISIS video. 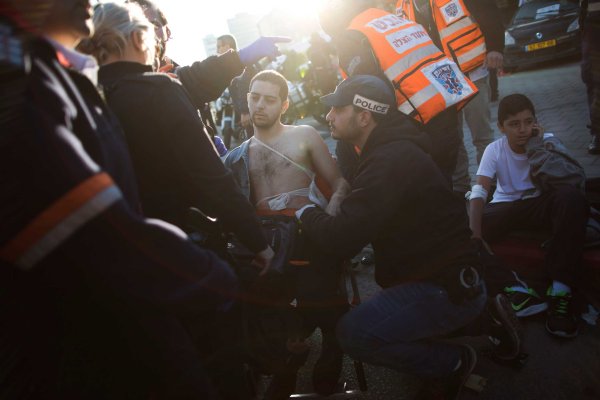 See the Aftermath of the Tel Aviv Bus Stabbing
Next Up: Editor's Pick