When Mushroom Clouds Were All the Rage

Capturing an atomic explosion at a test site in the Nevada desert in 1957.
Interim Archives / Getty Images
By Jennifer Latson

The mushroom clouds that appeared over the Nevada desert were a spectacular tourist attraction — at least initially.

After the first nuclear device was detonated at the Nevada Test Site on this day, Jan. 27, in 1951, atomic fever swept across the nation, bringing waves of visitors to Las Vegas, an ideal vantage point from which to see the clouds rising above the test site 65 mi. away. “At week’s end the Atomic Energy Commission cautiously confirmed the fact that the first atomic explosion had taken place in its new 5,000-sq.-mi. testing ground on the remote and barren plateau northwest of Las Vegas known as Frenchman Flat,” TIME reported in the Feb. 5, 1951, issue. “It was the first atomic explosion in the U.S. since the historic test at Alamogordo in 1945.” The 12 years during which the site averaged one explosion every three weeks was a boom time for Vegas, which nicknamed itself “Atomic City” and sponsored “Miss Atom Bomb” beauty contests, adorning winners with mushroom-cloud crowns.

The Las Vegas Chamber of Commerce printed calendars listing detonation times and suggestions for the best viewing locations. According to the PBS history show “American Experience,” many tourists watched the bombs go off from the Sky Room at the Desert Inn hotel and casino, but others picnicked as close to the test site as they could get.

One lucky group of newscasters was allowed to broadcast the explosion of a 31-kiloton bomb — dubbed the “Big Shot” — from the edge of Nevada’s Yucca Lake, 10 mi. from ground zero. One reporter, per PBS, narrated the experience in majestic terms: “A fantastically bright cloud is climbing upward like a huge umbrella… You brace yourself against the shock wave… Then, after what seems like hours, the man-made sunburst fades away.”

Residents of St. George, Utah, therefore, considered themselves exceptionally fortunate: they had a front-row seat for nearly every blast that rocked the desert. According to a TIME, parents in this tiny town, just downwind of the test site, regularly woke their children before dawn and brought them to a hilltop where they could watch the mushroom clouds rise with the sun.

“When a pinkish-red cloud drifted over St. George hours later, the parents were not frightened,” TIME reported. “After all, the Atomic Energy Commission had assured them that ‘there is no danger’ from radioactive fallout. Some parents even held Geiger counters on their children and exclaimed in wonder as the needles jumped.”

By the time that story was published, in 1979, an alarming number of the children who had once watched the bombs burst in St. George had died of leukemia. Others developed thyroid cancer as adults. Awe over the A-bomb’s pyrotechnical power had been replaced by a better-informed fear of its dangers, and the test site had moved its nuclear operations underground.

Read the original report on the first atomic explosion, from the Feb. 5, 1951, issue of TIME, here in the TIME Vault: “A Kinda Flash” 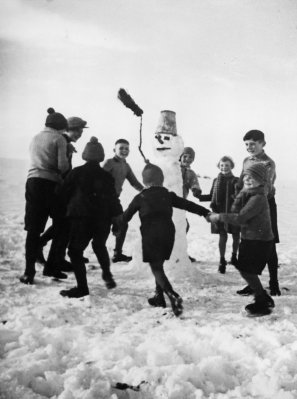 Celebrate Winter With 16 Vintage Snowman Photos
Next Up: Editor's Pick