Here's the One State of the Union Talking Point Republicans Liked

About a half-hour into President Obama’s State of the Union a strange thing happened: most of the Republicans jumped up and cheered while most Democrats stayed seated and silent. It was the only time it happened Tuesday night, and the topic was trade.

“China wants to write the rules for the world’s fastest-growing region,” said Obama. “That would put our workers and businesses at a disadvantage. Why should we let that happen? We should write those rules. We should level the playing field.”

“I’m the first one to admit that past trade deals haven’t always lived up to the hype, and that’s why we’ve gone after countries that break the rules at our expense,” added Obama, who earned a brief cheer from democratic socialist Vermont Sen. Bernie Sanders before continuing. “But 95% of the world’s customers live outside our borders, and we can’t close ourselves off from those opportunities. More than half of manufacturing executives have said they’re actively looking at bringing jobs back from China. Let’s give them one more reason to get it done.”

There are few areas of agreement between Obama and the new Republican Congress, but trade promotion authority, or TPA, which would ease the passage of the 12-country Trans Pacific Partnership, or TPP, potentially the largest free trade agreement ever, is one of them. For years the Administration has been negotiating TPP—affecting about 40% of the world’s GDP and about a third of the world’s trade—but so far Obama has yet to prove to Republicans that he is willing to spend the time, effort and political capital to get it done. But on Tuesday night, the Republicans’ response to his message was ecstatic.

The Republican Senate and House whips, Texas Sen. John Cornyn and Louisiana Rep. Steve Scalise, said that the trade talk was “probably one of the brightest spots” and “the most promising part” of the speech. Other top Republicans who criticize Obama around the clock, like Senate Majority Leader Mitch McConnell, said they hoped the President would now push the issue. Senate Finance Committee Chairman Orrin Hatch, the most senior member, said Obama’s remarks were “welcome but long overdue.”

In 1993, President Bill Clinton led an all-out push to get the massive North America trade deal through Congress. There were face-to-face White House meetings with Congressmen, White House envoys roaming the Hill, and 37 Commerce Department reports targeting industries “from computers to autos,” according to a Christian Science Monitor report, that helped show Congressmen how NAFTA would help their constituents. In October of that year, former CEO of the Chrysler Corporation, Lee Iacocca, stood on the White House South Lawn with hundreds of products (and businessmen) touting what the Administration believed would thrive under NAFTA. Under the white tents, Clinton joked to a pro-trade union man that he would wear the man’s company hat if he gave a speech. A month later, the House passed the bill in a squeaker and the Senate did shortly thereafter.

This time around, Republicans are hoping for another all-out Administration effort on TPP and the “fast-track” bill, which would allow limited congressional debate, no amendments, and an up-or-down vote. The Administration says such a bill is vital to pass TPP, as countries would be less willing to negotiate if they knew Congress could make large changes to the deal. But liberals are livid with Obama’s trade talk; they set up a press conference Wednesday to air out their concerns.

“The typical business plan in this country because of trade and tax policies: You shut down production in Cleveland and you move it to Beijing and sell the products back to the United States,” said Ohio Sen. Sherrod Brown after the State of the Union. “That makes no sense. And he’s wrong on that as his predecessors were.”

“If you think that previous trade agreements. . . have done well, you should support the TPP,” said Sanders. “But if you believe, as I do, that they have been disastrous, that they have cost us millions of decent paying jobs, then it make no sense to go forward in a failed policy and it should be defeated. . . . At the end of the day, among many other concerns, American workers are going to be forced to compete against people in Vietnam who make a minimum wage of 56 cents an hour.”

Still pro-trade lawmakers like Democratic Missouri Sen. Claire McCaskill believe that Obama can bring “enough” Democrats to pass a “fast-track” trade bill. Democratic Maryland Senator Ben Cardin, who supported the North American Free Trade Agreement in 1993 but opposed the more recent trade agreement bills with South Korea, Panama and Columbia, said Obama “probably” has the votes now to pass a TPA bill through Congress, although it’s easier in the Senate than House, where some conservatives have also raised an uproar about giving more power to the President.

The White House has recently increased its outreach efforts, tasking every Cabinet member to divvy up and target 80 House Democrats, according to the Hill newspaper. In an email Wednesday, Commerce Secretary Penny Pritzker told TIME that the trade agenda is a “top priority” for the Administration. “We are taking an ‘all-hands-on-deck’ approach to getting this done,” she said. “We are all out talking not only to members of Congress but to business leaders and workers around the country, telling the story of why trade and exports matter.”

The United State Trade Representative office touts that over nearly five years it has held over 1,600 congressional briefings on TPP. United States Trade Ambassador Michael Froman rebutted liberals’ concerns in a press conference on Wednesday, saying that manufacturing jobs are coming back from overseas and that export-related jobs pay 13 to 18 percent more than other jobs. “It gives us the opportunity to protect workers, protect the environment and level the playing field,” said Froman of TPP.

Still, Obama has a ways to go in getting broad support for both TPA and TPP. New York Sen. Chuck Schumer, a member of the Democratic leadership and Finance Committee, says “many of us wouldn’t support” TPA unless it addressed some China-related concerns. And the top Democrat on the influential Ways and Means Committee, Michigan Rep. Sandy Levin, says the Administration, Congress and outside groups need to immediately “tear apart” other outstanding issues, including those related to the environment and currency manipulation.

“I think it’s a mistake essentially to say let’s fast-track a package when there isn’t a real understanding of the issues and their resolution,” he said. “So that should be the focus right now and that will be the strong basis for getting bipartisan support. If we don’t do that, I don’t think there’s a chance that there will be bipartisan support.” 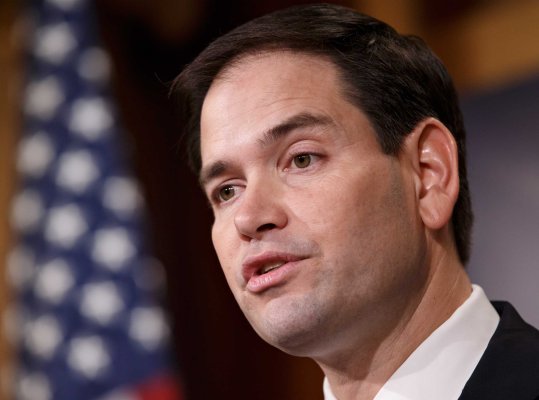 Rubio Says His Family Is Behind Presidential Run
Next Up: Editor's Pick