This Is the Childcare Program Obama Was Talking About

On Tuesday, during his State of the Union address, President Obama spoke of helping middle-class families afford childcare — and, he pointed out, we know we can do it because we’ve done it before. “During World War II, when men like my grandfather went off to war, having women like my grandmother in the workforce was a national security priority — so this country provided universal childcare,” he said. “In today’s economy, when having both parents in the workforce is an economic necessity for many families, we need affordable, high-quality childcare more than ever.”

That program, established in 1942, was a joint venture of the War Manpower Commission and the Office of Defense Health and Welfare Services. And, it turns out, getting the program in place wasn’t just a matter of freeing up men and women to contribute to the war effort — it was also a “national security” issue on the home front, as unattended children across the nation got up to no good.

It’s worth noting that the Works Progress Administration nursery schools mentioned in that piece were not originally related to the war effort; in fact, economic concerns — like the ones facing the nation today — were the impetus for their establishment. During the Great Depression, the nation faced a double-whammy of needy children and unemployed teachers; so, in October of 1933, Harry Hopkins of the Federal Emergency Relief Administration announced that more than a thousand nursery schools would be established nationwide through the Emergency Education Programs.

Those original WPA nursery schools technically closed, along with the WPA itself, in 1943. By then, the defense program had launched, and nursery schools and childcare facilities were able to apply to be subsidized with Defense funds, through the Lanham Act, to try to stay open. And, as a bonus, defense funds — unlike the WPA programs — weren’t restricted to families in poverty, which meant that middle-class families could also benefit from those childcare centers, making the WWII-era program almost universal. (Communities did have to prove that they were impacted by the war effort in order to get federal funds.)

One 2013 study found that the decision to fund childcare with the Lanham Act did in fact lead to a greater rate of employment among mothers, and that their children were better off in the long run. But, unlike the program Obama envisions for the modern world, the Lanham Act childcare centers were always meant to be a temporary solution. As soon as peace came, women were expected to return home to care for their children themselves. Congress gave women a few extra months, through March of 1946, to make arrangements, and then the childcare centers were closed.

At least one person, however, thought back then the way the President thinks today.

In her “My Day” column from Sept. 8, 1945, the former First Lady Eleanor Roosevelt described the letters she had received from women who wanted the centers to stay open: “But we have to face the fact that there are married women with young children who have to go to work. In such cases, it would seem to be in the interests of the community to organize child care centers and see that they are properly run,” she wrote. “These children are future citizens, and if they are neglected in these early years it will hurt not only the children themselves, but the community as a whole. Many communities can carry the expense of such organization for children’s centers without any state or federal help. But where state help is needed, it should be given; and when states are incapable of giving sufficient help, it should be forthcoming on a national scale as it has been in the war years.” 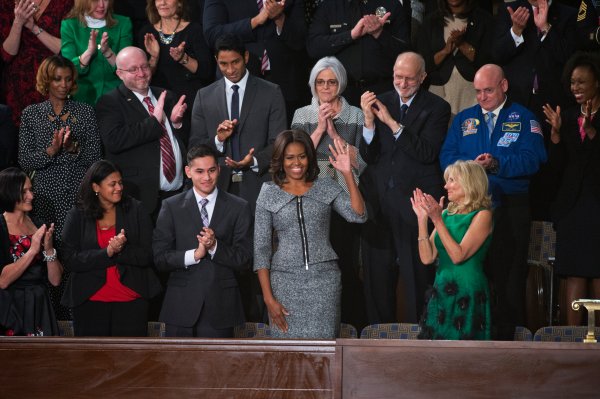 Michelle Obama Totally a Wore a Suit From The Good Wife to the State of the Union Address
Next Up: Editor's Pick