The 5 Worst Moments From Last Night's State of the Union

President Barack Obama delivers his State of the Union address to a joint session of the U.S. Congress on Capitol Hill in Washington on Jan. 20, 2015.
Larry Downing—Reuters
Ideas
By Nick Gillespie
Nick Gillespie is the editor in chief of Reason.com and Reason.tv and the co-author with Matt Welch of The Declaration of Independents: How Libertarian Politics Can Fix What’s Wrong with America.

The annual State of the Union Address (SOTU) is a rotten, time-honored ritual that marks the effective end of the holiday season in America. It’s like one last fruit cake that nobody wants and quickly tosses away after a moment of utterly false contemplation.

There were some tasty bits, for sure, in Obama’s seventh SOTU: He is correct to push for change in our policy with Cuba and his “conversion” in favor of marriage equality, however long overdue and politically motivated, is all to the good.

He promised his speech wouldn’t be a “laundry list.” True enough: It was more like a laundry truck, stuffed full of old and misguided ideas from his previous SOTUs. Before the speech slides down the memory hole, here are five moments to remember and then forget again until next year.

1. “Today, fewer than 15,000 [troops] remain” in Afghanistan and Iraq, said Obama. That’s down from nearly 200,000 just six years ago. Well, what took so long, really? Obama’s administration did everything it could to extend our presence in both countries (even tripling troop strength in Afghanistan for a “surge” that was a resolute failure by all accounts). Now we’re droning the hell out of Yemen, Pakistan, and elsewhere (where innocent targets are hit 28 times for every intended target, according to the British group Reprieve). And we’re back in Iraq, fighting ISIS without a declaration of war or a clear plan. Maybe we’ve “turned the page,” as Obama asserted in the speech’s controlling metaphor, but we’re just in a new chapter in the same tired old playbook when it comes to what Candidate Obama called “dumb wars” and pledged to avoid.

2. “America is number one in oil and gas. America is number one in wind power.” It’s true that the United States is undergoing an energy boom, but it’s no thanks to President Obama. Apart from subsidizing companies that make “clean energy” (and have a record of not delivering on promises), his administration has looked with horror on the fracking revolution that is the main reason for the rise in our production. On federal land, oil production is down 16 percent since 2010 and natural gas production is down 24 percent. Last week, Obama’s EPA proposed regulations to reduce emissions from fracked wells by 45 percent from their 2012 levels. The energy revolution is happening in spite of Obama not because of him.

3. “Middle-class economics works…. We can’t slow down businesses or put our economy at risk with government shutdowns or fiscal showdowns.” That’s all well and good, though it’s worth noting that government spending under Obama has been mostly flat precisely because of politics, shut downs, sequestration, and the like. Keeping spending constant is one of the major reasons deficits have reduced from record highs to “just” $483 billion last year. But if everything’s going in the right direction, why then is Obama calling for all sorts of new taxes and regulations on the business sector and high-income earners? Boosting the minimum wage, taxing college savings, mandating paid sick leave, pushing employers to offer to pay for college, and more: What theory explains how such costs will make employers likely to hire more workers and expand operations?

4. “During World War II…this country provided universal childcare….[Today, childcare is not] a nice-to-have, it’s a must-have.” It’s just short of obscene to invoke World War II’s privations in the current moment (and a gross overstatement, too; at its peak, the federal government helped to pay for “nurseries” for 130,000 children nationwide). Every aspect of America was commandeered to fight the Axis and staple goods ranging from butter to gas to steel to rubber and nylon were rationed. Today is nothing like that, and Obama’s “solution” to the cost of children is to subsidize daycare via direct payments and tax breaks. The predictable effect of injecting new money into a system will be an increase in prices. Which will then lead to calls for more subsidies.

5. “Let’s close loopholes so we stop rewarding companies that keep profits abroad, and reward those that invest in America. Let’s use those savings to rebuild our infrastructure and make it more attractive for companies to bring jobs home.” This is an Obama golden-oldie that makes it into almost every appearance he makes that’s longer than 30 seconds. If he’s serious about bringing jobs and profits “home” to America, the obvious place to start is with our corporate tax rate, which is the highest in the world among developed countries. What’s worse, though, is that we tax corporate earnings on a world-wide basis, meaning that companies headquartered here pay taxes (and then apply for credit) on what their overseas branches make. Just about nobody else does that and it’s that sort of policy that goosed Burger King to relocate its main headquarters to Canada.

Near the end of his speech—which assiduously avoided engaging how old-age entitlements such as Medicare and Social Security are already overwhelming the federal budget and will overtake it completely in the coming decades—Obama called (yet again) for new civility, pledging himself to deal kindly and openly with Republicans even as he noted that they were patently anti-abortion, anti-immigrant, and anti-poor people. He even lauded the fact that he had won re-election after noting he “had no more races to run” with the line: “I know, I won both of them.”

Worth a laugh, maybe, but also churlish, especially given the shellacking his party took just a few months ago. Arguably the most frustrating thing about Obama’s presidency is that he himself often barely seems to be inhabiting it. He reads about things in the newspapers, just like the rest of us, only playing commander in chief when it suits his fancy. That’s no way to run a country, especially one in which your position is weaker than it was just last year. 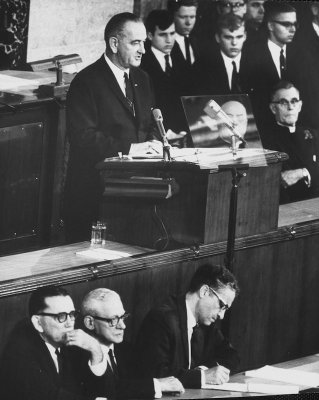 50 Years Ago, the State of the Union Actually Meant Something
Next Up: Editor's Pick