One State of the Union, Two Barack Obamas

For his sixth State of the Union, Barack Obama sent two Presidents to stand before the nation and its Congress, both wearing the same powder-blue tie and speaking with the same familiar voice.

One was victorious, the other knee-deep in the fight. One declared the economy recovered, while the other described the ongoing suffering of America’s workers. One promised an end to politics and partisanship, the other aimed to lay the groundwork for the destruction of his Republican foes.

The night progressed less as a monologue than a tag team between the two faces of a term-limited President working to cement his legacy. It had been “a breakthrough year for the economy,” he said in one breath, just moments before describing the plight of a couple who could not go on vacations because of their student loans, and whose child care cost more than their mortgage. “The shadow of crisis has passed,” he said, before adding that it would “take time” to defeat the Islamic State in Syria and close vulnerabilities exploited by North Korean hackers.

The President’s bet was that both visions could exist at the same time, and that the American people, hungry for good news and happy with recent economic progress, would forgive the contradictions. Obama is not ready to give up on the vision he first presented to the country in 2004, as the fresh-faced state senator who believed not in a blue or red America, but a United States of America. “I still think the cynics are wrong,” he said. “I still believe that we are one people.”

But at the same time, he could not deny the knife fighter he had become as the President of a nation where so many viewed his ideas with hostility. “Imagine if we broke out of these tired old patterns,” said the optimist Obama about the partisanship around him, while the partisan Obama laid out a policy agenda, including steep increases in taxes for the wealthy, new regulations and new government benefits for poor workers that Republicans had already vowed to block.

“I have no more campaigns to run,” said the optimist, while the partisan taunted applauding Republicans — “I know because I won both of them” — with a gloating grin. “A better politics isn’t one where Democrats abandon their agenda or Republicans simply embrace mine,” the first continued, while the other declared that the “verdict is clear” on the past five years of partisan fights over the economy and that Democrats had been right.

A few hours before his split-screen identity took over the nation’s televisions, a senior administration official scoffed at the notion that the speech had been written to influence the next presidential election in 2016. “Why would he be focused on an election that he’s not in?” the official said.

MORE: The full text of the State of the Union

In fact, the President was focused not only on 2016, but also 2018, 2020 and many elections beyond. “It’s now up to us to choose who we want to be over the next 15 years, and for decades to come,” he said. In politics, choose means vote. And Obama, like all politicians before him, wanted to keep winning.

Legacy matters because the White House knows a simple truth: last fall’s Republican sweep put an end to President Obama’s big-ticket domestic legislative agenda. His work, in other words, is all but done in Congress — no big tax reform, no entitlement fix or comprehensive immigration solution will come while he still has flying rights on Air Force One. What remains for the next two years is regulatory tinkering, budget fights, a long-shot chance of corporate-tax reform and high hopes for some new trade deals sure to upset his party’s base.

MORE: Obama made history by using this word during the State of the Union

But the State of the Union address, the most watched annual public-policy wish list in human history, has never been about new legislative proposals. It is about setting the terms of debate, and all the annual speeches to a joint session of Congress, Obama has only ever really had one thematic frame: the American middle class is struggling. I can help, if my political foes stop playing politics. So let’s do this, America.

The speeches have been good, as a rule, and Tuesday was no exception, but the words have still missed their mark as often as not, because the economic foundation they landed upon was in tatters. Now that it is firming up again, his luck might turn around. Though it is far from certain which Obama history will ultimately remember: The one calling the country to join hands, or the one telling voters to pick a side. 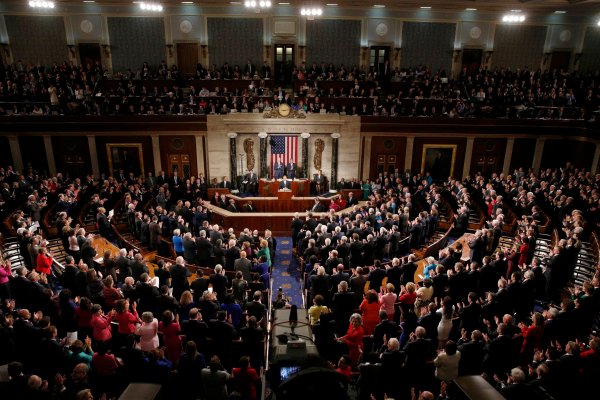 The State of the Union Brought Out the Troll in Everyone
Next Up: Editor's Pick