President Barack Obama touted a growing economy and declining deficits in his State of the Union address Tuesday evening, calling on the nation to “turn the page” after years of economic and foreign policy turmoil and to refocus on what his administration terms “middle-class economics.”

“We are 15 years into this new century,” Obama said. “Fifteen years that dawned with terror touching our shores; that unfolded with a new generation fighting two long and costly wars; that saw a vicious recession spread across our nation and the world. It has been, and still is, a hard time for many. But tonight, we turn the page.

“The shadow of crisis has passed, and the State of the Union is strong,” Obama said.

Obama’s address came with his approval ratings enjoying a tentative rebound thanks to an economic recovery that has finally gained steam after years of more sluggish job growth, but also as Republicans are emboldened to challenge him more than ever after winning full control of Congress in the midterm elections. The President is looking to keep control of the debate in Washington, and said he won’t be hampered by political constraints during his final two years in office.

“I have no more campaigns to run,” Obama said. “I know because I won both of them.”

Iowa Republican Sen. Joni Ernst, delivering the GOP’s official response to Obama, said the party has a mandate to change Washington after the midterm elections.

“We heard the message you sent in November—loud and clear,” she said. “And now we’re getting to work to change the direction Washington has been taking our country.

“The new Republican Congress also understands how difficult these past six years have been,” Ernst added. “For many of us, the sting of the economy and the frustration with Washington’s dysfunction weren’t things we had to read about. We felt them every day.”

MORE The full text of the State of the Union

The President spent the last two weeks traveling the country to announce policy initiatives and executive actions he says would boost the middle class. Those include a $320-billion combination of closing tax loopholes for the wealthy and new fees on large financial institutions to fund tax breaks for most Americans.

“Tonight, after a breakthrough year for America, our economy is growing and creating jobs at the fastest pace since 1999,” Obama said. “Our unemployment rate is now lower than it was before the financial crisis. More of our kids are graduating than ever before; more of our people are insured than ever before; we are as free from the grip of foreign oil as we’ve been in almost 30 years.

“At this moment—with a growing economy, shrinking deficits, bustling industry, and booming energy production—we have risen from recession freer to write our own future than any other nation on Earth,” Obama added. “It’s now up to us to choose who we want to be over the next 15 years, and for decades to come. Will we accept an economy where only a few of us do spectacularly well? Or will we commit ourselves to an economy that generates rising incomes and chances for everyone who makes the effort?”

And as he enters the lame-duck period of his presidency, Obama took an early shot at framing the legacy of a White House tenure that has enraged conservatives and disappointed many liberals.

“Over the past six years, the pundits have pointed out more than once that my presidency hasn’t delivered on this vision,” he said. “How ironic, they say, that our politics seems more divided than ever. It’s held up as proof not just of my own flaws—of which there are many—but also as proof that the vision itself is misguided, naïve, that there are too many people in this town who actually benefit from partisanship and gridlock for us to ever do anything about it.

“I know how tempting such cynicism may be,” Obama added. “But I still think the cynics are wrong.”

Obama highlighted the ongoing American efforts against the Islamic State of Iraq and Greater Syria (ISIS), holding it up as a model for how to fight extremists in the modern era.

“I believe in a smarter kind of American leadership,” he said. “We lead best when we combine military power with strong diplomacy; when we leverage our power with coalition building; when we don’t let our fears blind us to the opportunities that this new century present. That’s exactly what we’re doing right now—and around the globe, it is making a difference.

“This effort will take time. It will require focus. But we will succeed,” Obama said of the anti-ISIS effort, repeating a call for Congress to pass a new authorization for the use of military force against the group, which has gained control of large swaths of Iraq and Syria.

“I urge this Congress to finally pass the legislation we need to better meet the evolving threat of cyber-attacks, combat identity theft, and protect our children’s information,” the President said. “If we don’t act, we’ll leave our nation and our economy vulnerable. If we do, we can continue to protect the technologies that have unleashed untold opportunities for people around the globe.” 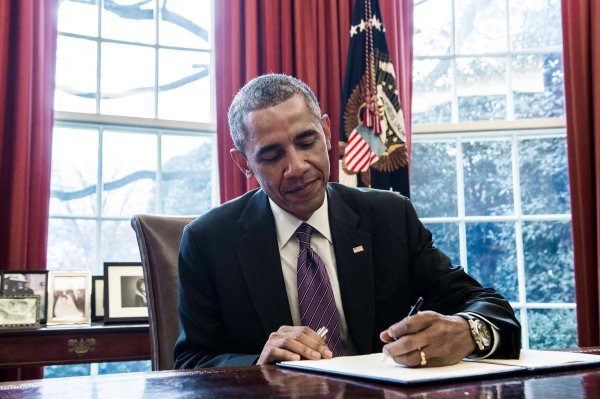 How 7 Ideas in the State of the Union Would Affect You
Next Up: Editor's Pick