Lawmakers Will Hold Up Pencils at SOTU to Honor Charlie Hebdo

A giant pencil is held up at a vigil outside The French Institute in London on Jan. 9, 2015 for the 12 victims of the attack on the Paris offices of satirical weekly Charlie Hebdo.
Justin Tallis—AFP/Getty Images
By Tessa Berenson

Members of Congress will honor the victims of the Charlie Hebdo attack during the State of the Union by holding up yellow pencils.

A spokeswoman for Democratic Rep. Gwen Moore of Wisconsin said that she will hold up a pencil and that they have confirmed that other lawmakers will do so as well.

“Rather than divide and intimidate us, these brazen and barbaric attacks have united the international community and prompted a global response in defense of the freedom of expression,” said Eric Harris, press secretary for Congresswoman Gwen Moore (D-WI). Moore will participate in the tribute.

The pencil has become a symbol of remembrance and solidarity after the massacre at Charlie Hebdo, which many saw as an attack on free speech.

The advance text of Obama’s speech is not yet available, but it is widely expected that he will reference the attack. 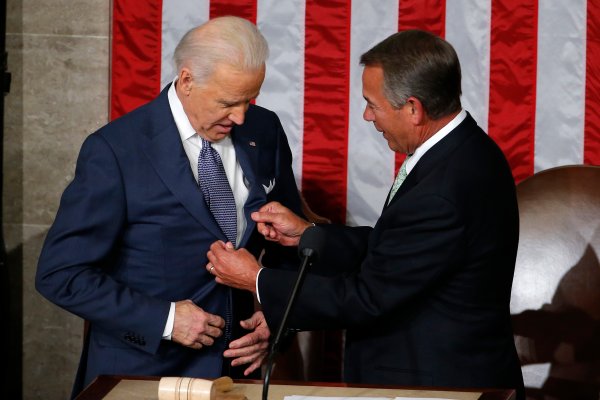 Here's What John Boehner Said About Joe Biden's Suit at Last Year's State of the Union
Next Up: Editor's Pick