How the 'John Oliver Effect' Is Having a Real-Life Impact

Comedians mock our cultural and political institutions on TV all the time. But it’s not every day that a comic’s jokes crash a government website or directly inspire legislators to push for new laws.

John Oliver, host of HBO comedy news program Last Week Tonight, is quickly building up that level of cultural cachet. While his forebears and former colleagues Stephen Colbert and Jon Stewart spend as much time lampooning the news media covering world events as they do analyzing events themselves, Oliver’s show stands out for its investigations into topics as varied as the militarization of the police state, Net neutrality and Argentina’s debt crisis.

Oliver’s approach has even been cited as an inspiration for local government transparency. In January, a Washington State legislator proposed a new bill that would let citizens comment on new legislation using videos submitted online. The state senator backing the new bill credited Oliver’s ability to turn boring topics into viral phenomena through online video as motivation for the new initiative.

But the show has long caused real-world ripples. Here are other examples of times when the so-called “John Oliver effect” had an actual impact on the world:

In June Oliver discussed how bail is often to used to keep poor, low-risk defendants locked up before they’ve even been found guilty of a crime. He noted that people who can’t afford to pay bail have two bad options: plead guilty to avoid waiting in jail or stay in jail until a trial. “Jail can do for your actual life what being in a marching band can do for you social life,” he said. “Even if you’re just in for a little while, it can destroy you.” In July, just a month after Oliver’s monologue, New York mayor Bill de Blasio announced that the city would relax bail requirements for people charged with nonviolent crimes and misdemeanors.

Oliver was highlighting corruption at FIFA, the world’s most powerful sports organization, long before U.S. officials arrested several of the federation’s top executives. In 2014 Oliver compared FIFA (unfavorably) to organized religion and called out the organization’s poor treatment of migrant workers. He was back with an even more scathing takedown on Sunday, calling for FIFA president Sepp Blatter to step down. “The problem is all the arrests in the world are going to change nothing as long as Blatter is still there,” Oliver said “To truly kill a snake, you must cut off its head — or, in this case, its asshole.” On Tuesday, Oliver got his wish—Blatter abruptly announced his resignation from FIFA.

Crashing the FCC Over Net Neutrality

One of Oliver’s most popular segments was an in-depth look at changing Net-neutrality laws last summer. Oliver took cable and phone companies to task, accusing them of wanting to create Internet “fast lanes” that would show preference to certain types of Internet traffic above others and undermine the traditional tenets of a free and open Internet. Oliver implored his fans to write to the Federal Communication Commission to voice their displeasure with potential changes to Net neutrality. The government agency received so many comments that its servers crashed. Internal emails later revealed that FCC officials were watching — and laughing at — Oliver’s takedown when it aired. And in February, the FCC voted to adopt net neutrality regulations — another feather in Oliver’s cap.

Giving Back to Female Engineers

During a segment railing against the Miss America pageant, Oliver dug into the organization’s tax filings to challenge the claim that it doles out $45 million in scholarship dollars each year. Though he determined that the Miss America Organization is the largest provider of scholarships for women in the world, he directed viewers to donate to other groups he deemed more worthy instead, like the Society of Women Engineers. Lo and behold, the engineering organization racked up $25,000 in donations in two days following the segment, or about 15% of its typical annual donations from individuals. The group credited the huge spike to the “John Oliver bounce.”

Following up on a lengthy investigation by the Washington Post, Oliver spent an episode explaining a law that allows police to confiscate cash and property from people who have not been charged with a crime. The practice is known as civil forfeiture, and Oliver took the policy to its absurdist conclusion with a mock Law and Order episode in which Jeff Goldblum tries to interrogate inanimate objects. After the increased exposure given to the issue by the Post and Oliver, Attorney General Eric Holder announced last week that he would enact major limitations on the law. 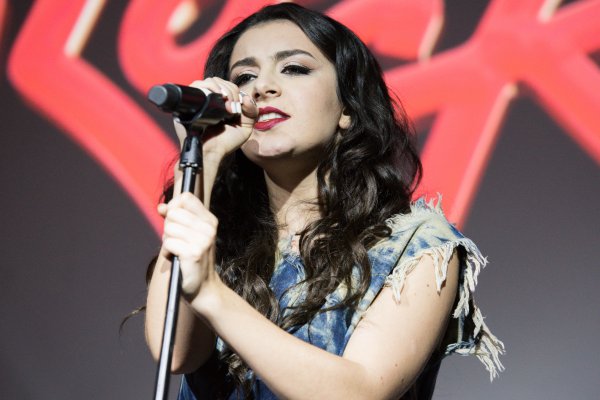 Watch Charli XCX and Rita Ora Have a Raunchy Slumber Party in 'Doing It' Video
Next Up: Editor's Pick