Why Taking a Page Out of a U.K. Tabloid Is Good for Women

Across the globe only 24% of people featured in the news are women. Of those women who do feature, a significant portion appear in unhappy circumstances, as victims of violence or discrimination. Women with more positive messages to convey sometimes find themselves airbrushed out of the picture. So it may seem counterintuitive that feminists are hailing the decision by Britain’s red-top tabloid, the Sun, to drop a feature that for 44 years guaranteed women near-total exposure across the whole of its third page.

Yes, this Friday’s Page 3 Girl may be the last, and that’s — reasonably — good news. The Sun has not confirmed the move but its stablemate the Times of London reported that their mutual proprietor Rupert Murdoch had signed off on the decision to retire the photographs of bare-breasted models from the print edition of the tabloid. “It is about time, really,” as Yas Necati of the No More Page 3 campaign told the Times. She added: “When you open up the Sun, which is Britain’s biggest-selling family newspaper, you see images of men doing things — running the country, achieving in sport — whereas the most prominent image of a woman is one where she is sexually objectified.” The Sun’s skewed representation of the sexes was laid bare-naked in this film The Experiment, shot for the campaign.

But the film doesn’t entirely convey the pernicious genius of Page 3 or why Page 3 has been quite so damaging to women. Page 3 intends to be provocative, not just in the obvious sense, by titillating male readers, but in trying, and often succeeding, in provoking women into reacting against the Sun. Every complaint — and there have been many — served to foster a narrative equating feminism with joylessness, sexlessness, humorlessness and the ammonium stink of political correctness. The actual Page 3 items, by contrast, have often been funny, in the manner of British seaside postcards or the long-running movie franchise Carry On, in which bra straps twang and wide-eyed nymphets serve up double entendres. One Page 3 conceit provided each woman featured with space for a quote on a current-affairs issue of the day, under the punning headline “News in Briefs” — briefs being all the model in question would be wearing.

And if joy is not now unconfined among feminists at the departure of the Page 3 Girl, that’s partly because she isn’t actually leaving. She just seems to be putting on a wet T-shirt for appearances in the newspaper and will continue to disport herself topless on the Sun’s website. This is hardly a stride towards equality in the mold of the 1928 Equal Franchise Act or the 1970 Equal Pay Act, more of a tottering baby step on painfully high stilettos by a news organization that is just as liable to reverse direction if its bottom line suffers as a result.

Meanwhile bright individuals have rushed to act as the Sun’s useful idiots, decrying the disappearance of Page 3 as censorship and reinforcing the notion that a monstrous regiment of monstrous women are out to sabotage a nation’s innocent fun. Among their number, inevitably, are Page 3 alumnae including “international lingerie model” Rhian Sugden, who tweeted this:

Sugden is part right, except that the day has long arrived when people in comfy shoes and without bras determine the way the world is run and represented in the media. They’re called men. So if Britain’s leading red-top even slightly moderates the hostility towards women it cloaks as a bit of a laugh, that’s to be celebrated. In moderation. 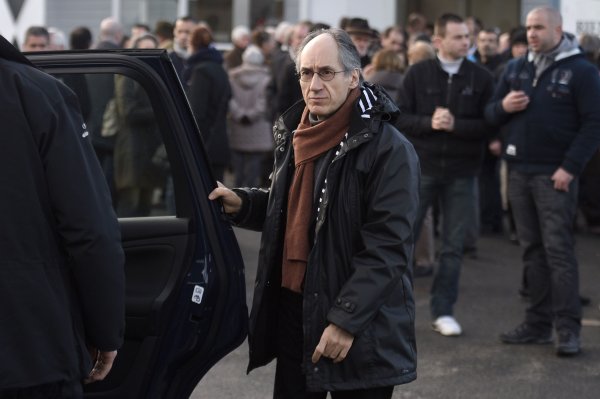 Charlie Hebdo’s Editor Explains Why It Attacks Religion
Next Up: Editor's Pick