When Larry Wilmore’s new Comedy Central show had to change its title from The Minority Report to The Nightly Show, the comedian told me it was a good thing. He wanted his news-comedy show to focus on the underdog, and he didn’t want people making assumptions just because he’d been The Daily Show‘s “senior black correspondent”: “At least they won’t have that expectation,” he said. “Why’s he not talking about black today? What’s going on?”

Nobody gave the news cycle that memo. Even though Wilmore joked that he’d started a year late–“All the good bad-race-stuff happened already!”–he came on the air with plenty of material, from the Oscars’ snubbing of Selma to the Eric Garner non-indictment, that showed how, yeah, it’s actually useful to have a late night host of color around to comment on it. There was enough in the zeitgeist already that the timing of the debut wasn’t more than an aside: “A brother finally gets a show on late night TV! But of course he’s got to work on Martin Luther King Day.” (There wasn’t even time to work in Bill Cosby! That’s for night two.)

The first Nightly Show opened with a Wilmore monologue, somewhere between The Daily Show‘s headlines approach and John Oliver’s lengthy video essays: an extended standup arc that weaved in news items and built as it moved along.

Not surprisingly, from a performer who’s honed his acerbic commentary over years alongside Jon Stewart, this was the most solid, assured part of the first episode. Wilmore and his writers sketched the routine as one piece, starting from the Selma uproar, detouring to the state of black protest and Al Sharpton (“You don’t have to respond to every black emergency! You’re not black Batman!”), and working up to a chilling news item–police using mug shots of black men for target practice–that led to a searing final joke about police shootings that landed like an uppercut: “I’m not surprised when Kobe hits a jumper. That dude practices.”

The rest of the show, as advertised, was a Politically Incorrect-style panel: Sen. Cory Booker, comedian Bill Burr, rapper Talib Kweli and corrrespondent Shenaz Treasury following up on the opening monologue’s themes led by Wilmore. With the necessary caveat that it’s fruitless to “review” a late-night show after one night–they’re houses that we move into while the wiring is still exposed–this is the segment that will need the most work. It’s one thing to get your monologue tight, another to get a group of guests to be both funny and seriously engaged, all while maintaining the show’s energy and comic rhythm. Wilmore was ready with good questions–“Do you feel you’re just a hoodie away from being face-down in the pavement?” he asked Booker–but felt more tentative in the back-and-forth.

But the panel also may be the part of The Nightly Show with the most upside, the way for Wilmore’s show to really distinguish itself from Jon Stewart’s and Stephen Colbert’s. (And for that matter, from Bill Maher’s and every other panel-format talk show.) No doubt the show will try a lot of bits, keep some, ditch some: night one, it was “Keep It 100,” where Wilmore challenged each guest to answer a question 100% honestly or be charged with a “weak tea” answer.

The bit was shaky–partly because it depended on the audience’s verdict, and talk-show audiences clap regardless, because that’s what they do–but Wilmore salvaged the end by playfully pelleting Booker with weak-tea bags for his canned answer on whether he wanted to be President. (Afterward, his staff gave him a pop question–“What’s the last racist thought you had?”–to which he said he’d wondered if a white woman thought he was going to steal her purse. Which, eh, Earl Grey maybe?)

Maybe the most important first impression from a talk show’s first night is simply point-of-view: does the show know what it is, and why it is? Here The Nightly Show really has something going for it. It opens like we’ve come to expect a fake-news show to, with the host at a desk in front of a map, but then you notice something different: the world map is oriented with the south on top. The impulse is to say the map is “upside down,” but of course it’s not–there is no up and down in space, only the orientation you assign as the standard if your culture happens to originate in the northern half of the planet.

That may be the guiding principle for The Nightly Show: to approach issues by questioning why we’re used to seeing them from a certain angle. It’s a philosophy that fits Wilmore, whose comic identity is as a free thinker, dryly funny, not ideologically predictable, a guy with the questions rather than the answers. He seems suspicious of overconfident blowhards, which may be why he seemed reluctant to take too heavy a hand running the panel, and it’ll take time to work out that balance.

But he shouldn’t worry about making himself too big a presence on The Nightly Show. If his show’s a success, after all, it won’t matter what title it ended up with. We’ll just call it “Larry Wilmore.” 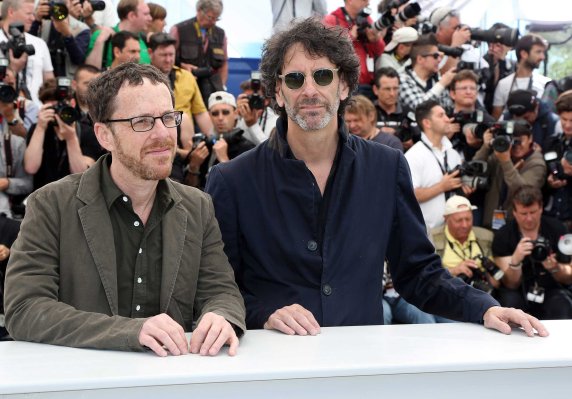 Coen Brothers to Preside Over Cannes Film Festival Jury
Next Up: Editor's Pick