Fighting Has Flared Up in Ukraine, Raising Fears of All-Out War Once Again

A new volunteer for the Ukrainian Interior Ministry's Azov battalion embraces his girlfriend before he and other volunteers depart to the frontlines in eastern Ukraine, in central Kiev on Jan. 17, 2015.
Gleb Garanich—Reuters
By Sabrina Toppa

Civilians came into the cross fire on Monday when pro-Russian fighters and Ukrainian forces battled in the rebel-controlled city center of Donetsk, critically undermining hopes that an already shaky four-month-old truce agreement can be implemented.

Shells struck a hospital, wounding a doctor and five patients. A nearby university was also hit, sparking speculations that the target was the nearby rebel security ministry.

In the eastern Ukrainian city of Kharkiv, an explosion wounded 12 civilians around a courthouse where the trial of what Agence France-Presse describes as a “pro-Western militant” was under way. In the nearby city of Debaltseve, three people died and 12 were left wounded during an exchange of heavy artillery fire. Rebels purportedly launched attacks from residential areas, putting many civilians on the front line.

The worsening crisis comes amid allegations that approximately 700 Russian fighters have slipped into Ukraine this week. Ukraine has frequently accused Russia of backing the pro-Russian separatists with increased arms and manpower.

Meanwhile, a fierce battle is taking place for control of Donetsk airport. Ukrainian presidential adviser Yuriy Biryukov said on Facebook that there were “many injured” after rebels blew up part of a terminal building, Bloomberg reports.

The U.N. Security Council will hold a meeting about the Ukrainian crisis on Wednesday. The conflict in Ukraine has killed nearly 5,000 since April 2014. 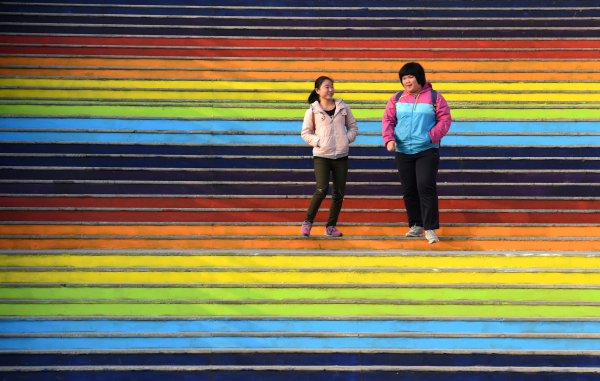 What's the Priority for Chinese Colleges? 'Studying and Propagating Marxism'
Next Up: Editor's Pick