Princess Kate: I Feel the Baby Kicking, Moving 'All the Time'

She may not know the sex of her second baby but Princess Kate knows one thing – her future child is kicking away with gusto.

Kate, 33, told well-wishers she could feel her baby kicking while opening a London recreation center as part of her official royal duties Monday.

“It’s moving all the time. I can feel it kicking now,” she told Martina McDonagh, 17, while holding her tummy to prove her point.

“I told her I hoped it was a girl but she said she doesn’t know yet,” Martina told reporters afterwards. “She said it was moving around a lot.”

The $48 million facility is the perfect place to learn to swim – and Prince George, 18 months, may take advantage. The Kensington and Chelsea Council presented Kate with lifetime membership for her family, along with a duck-shaped rubber ring for Prince George and his own swimming lesson kit.

The center has special meaning for the royal family. Prince William learned to swim there as a child, when a pool existed on the same site as the new center.

“The Duchess was talking about Prince William learning to swim here and she said she hoped Prince George can come here to learn too,” Tim Ahern, the council’s Cabinet member for environment and leisure, told reporters.

“If George goes to school at Wetherby or one of the other local schools, he will almost certainly come here. Wetherby will use it.”

As she toured the center – which has three swimming pools, a 120-station gym and a dance studio – Kate watched a series of sports being played. Over at the tai chi demonstration, Kate told grandmother Shelagh Laslett-O’Brien, 65, that she liked the look of the sport. “She said she’d maybe come down and try it after she’s had the baby,” Laslett-O’Brien, a retired social worker who ran a centre for homeless and refugee families in nearby Bayswater, tells PEOPLE.

She spoke to 3- and 4-year-old arise new from St. Francis of Assisi Primary school, asking them about the throwing game they were playing. “I thought the children would be nervous but they were really comfortable talking to her,” teacher Ailbhe Donoghue, who praised the duchess’s calm nature, tells PEOPLE. “She seemed very natural with the children. She had a nice presence.”

Their ease with her contrasted with earlier when a little two year old had dissolved into nerves at the prospect of handing her flowers and a tiny baby started crying when he met her.

Zack Benson, eight months old, and with his first teeth about to come through, was in the greeting line-up in the arms of his mother Rosie at a new high school in west London that Kate was opening.

He is the son of David Benson, the head of the Kensington Aldridge Academy. “You¹re very tired,” six-month-pregnant Kate told Zack. “He is very sweet.” His mum, 33, explained, “I think he is quite tired and hungry.”

During her tour of the school, she met children in reading groups, including one 11-year-old girl reading a book called How To Avoid A Wombat’s Bum. “She said, It looks like a good book,” Chyna Mealin told reporters.

“She mentioned that she likes to read to George, books with pictures.”

And she left with some gifts for George – a xylophone and baby-grow. And pupils who make ceramics, jewelry and other objects to sell at the nearby Portobello Road market, gave her a plate with a portrait of a golden-haired boy and Prince George’s full name – George Alexander Louis – and date of birth, July 22, 2013. 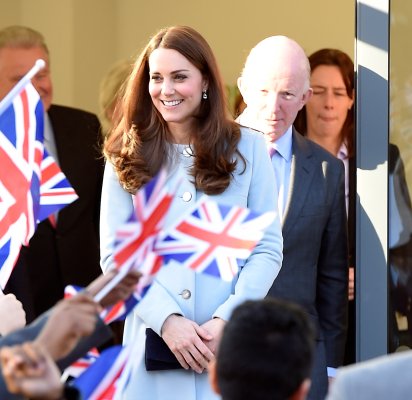 Princess Kate Leaves a 2-Year-Old Speechless
Next Up: Editor's Pick