Since the West and Russia reverted to old Cold War animosities after Moscow’s annexation of Crimea last year, E.U. and NATO officials have accused Russia of using state media to exploit historical grievances and spread misinformation about the war in Ukraine. The aim, they say, is to discredit the E.U. and stoke tensions among Russian-speaking communities across Europe.

Now Latvia is proposing that the E.U. fights back with its own Russian-language television station. “We cannot just prohibit it,” Makarovs told reporters in the Latvian capital recently, “but we want to create an alternative of comparable quality in technical terms.”

Creating a product of comparable quality to Russia’s slick media machine is, however, the key challenge. While the Kremlin is still sinking money into its state channels despite its recent economic woes and has developed a coherent ideological narrative, the governments of the E.U. remain beset by foreign policy splits and are unlikely to devote their shrinking budgets to a TV station that is not commercially-viable, says Matthew Bryza, a former U.S. diplomat now working for the Estonia-based International Center for Defense Studies.

“It will be very difficult to get a sustained budget and a sustained effort that provides quality programming,” he says.

Makarovs says that the idea is to launch a Russian-language channel produced by independent media experts in the E.U. that would reach Russian-speakers both within the union’s borders and in Russia. He says the plan has tentative support from Poland, Sweden, Denmark, Germany, the Netherlands, Lithuania and the U.K.. But it is the Baltic states like Latvia and Estonia — where Russian-speakers represent around a quarter of the population — that the need is most acute.

Russian stations like Channel One, Russia1 and NTV-Mir broadcast comedy shows, soap operas and action moves, as well as slick documentaries and current affairs programs that attract audiences with their high production values.

“The success or failure always boils down to whether or not you can get content that people want to watch — no one is going to flip on a TV station which seems propagandist,” says Bryza.

Makarovs insists that is not their intention: “The easy way would be to create a media financed by the E.U. that would be a Brussels mouthpiece… which would be the stupidest thing to do.”

But that is exactly how Moscow sees it. On January 12, Russia’s Deputy Foreign Minister Alexey Meshkov accused the E.U. of being the side peddling propaganda. “We’ve always taken a positive position on the freedom of speech,” he said, “but the E.U. plans for creating a kind of counter-propaganda channel can hardly correspond to the concept of freedom of speech.”

The head of the BBC World Service, meanwhile, complained in an interview with The Guardian that they were being “financially outgunned” by Russian outlets. For these reasons, Bryza says he is “not optimistic” of the success of any new channel.

Privately, diplomats are sceptical that the E.U. television station will move beyond the planning phases. But there is a growing understanding that information warfare has to be a priority.

The foreign ministers of Denmark, Estonia, Lithuania and Britain earlier this month wrote a letter to the E.U.’s foreign policy chief, Federica Mogherini, warning of the dangers of Russian propaganda. “The objectives are to discredit E.U. narratives, erode support for legitimate Governments in the region, demoralize local populations, disorient Western policy-makers, and undermine the concept of free, independent, pluralistic media,” the paper reads.

Possible counter-measures include boosting support for exiled Russian-language bloggers and existing independent Russian-language media, and challenging Russian media reports though sites like StopFake.org. David Welch, director of the Centre for the Study of War, Propaganda & Society at Britain’s University of Kent, points to the recent success in using fact-based analysis to disprove reports in Russian media of a three-year-old boy crucified in Ukraine, and allegations that a Ukrainian jet that shot down the passenger aircraft, MH17.

He argues that the E.U. should not shy away from an aggressive media campaign of its own, and seize the opportunity to highlight any cracks in the Russian narrative of strength and power. “Increasingly oppressive measures at home together with sanctions and oil prices have clearly undermined the Russian message and inevitably led to more open questioning within Russia,” he tells TIME. “It is this disaffection that offer the West a core focus for its propaganda.”

The truth is the best weapon the E.U. has, analysts say. Now it just needs to find a way to counter Moscow’s grip on the Russian-language airwaves or its target audience will never hear it. 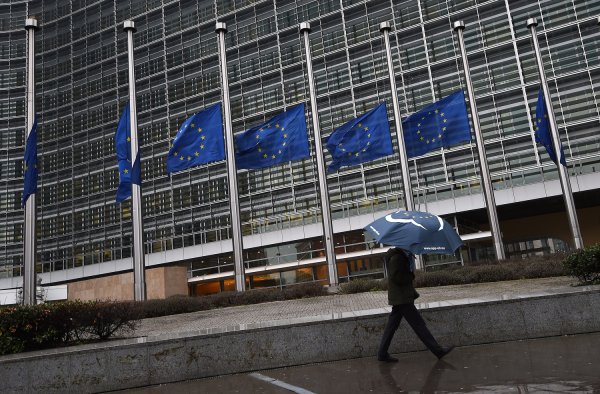 E.U. Ministers to Discuss Jihadist Threat
Next Up: Editor's Pick