Twenty-eight Foreign Ministers are set to meet in Brussels on Monday to discuss persistent threats against the European Union from Islamist militants, as well as the renewed fighting between the Ukrainian military and separatist insurgents.

However, the ministers are not scheduled to hammer out any decisions regarding how the bloc will respond to threats from potential terror cells, according to Agence France-Presse.

Last week, authorities in Belgium foiled a failed terrorist plot, resulting in the death of two armed suspects. Similar raids were also launched in Germany and France a week after three gunmen linked to Yemen- and Syria-based terrorist networks carried out a series of high-profile attacks across Paris that resulted in the deaths of 17 people, including a dozen at the offices of satirical newspaper Charlie Hebdo.

Thousands of Europeans are believed to have traveled to battlefields in both Iraq and Syria to fight alongside Islamist militias, raising concerns among E.U. officials over what the battle-hardened jihadists are capable of doing if they return home.

The ministers are also slated to discuss renewed tensions between Kiev and Moscow as fighting between the Ukrainian military and pro-Kremlin insurgents has escalated in recent weeks.

Reports swirled on Monday that Ukrainian troops retook Donetsk airport over the weekend after launching a massive counteroffensive against Russian-backed separatists in the area. 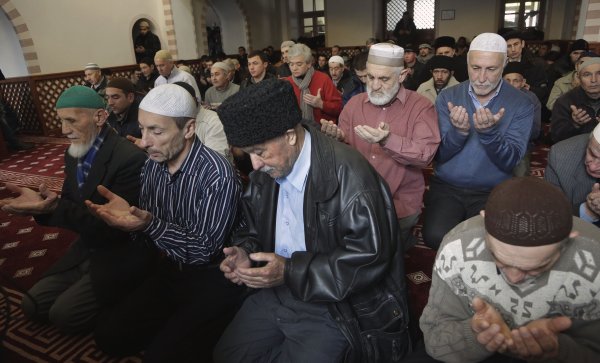 How Islam Became the Fastest-Growing Religion in Europe
Next Up: Editor's Pick