5,000 Rally Against Charlie Hebdo in Pakistan

Around 5,000 people gathered in Lahore, Pakistan, on Sunday for the latest rally against French satirical magazine Charlie Hebdo‘s depiction of the Prophet Muhammad.

Protesters held posters that read, “This is not freedom of expression, it is open aggression against Islam,” while a terrorist group, Lashkar-e-Taiba, which is linked to attacks in India, encouraged a boycott of French products, Reuters reported.

Charlie Hebdo published a cover image last week of the Prophet Muhammad holding a sign reading “Je Suis Charlie,” after a brutal attack by gunmen who ambushed the newspaper’s offices and killed 12 people. The attack was linked to the magazine’s critiques of Islam, for which it had drawn controversy in the past.

Pakistan’s President Mamnoon Hussain had previously called on Charlie Hebdo to issue an apology for its “insulting the faith of others,” as protesters demonstrated in Karachi last week, according to Bloomberg. Anti–Charlie Hebdo riots have also taken place in Turkey and the Philippines. Pope Francis has also expressed his disapproval of mocking religions, but condemned the brutal attacks. 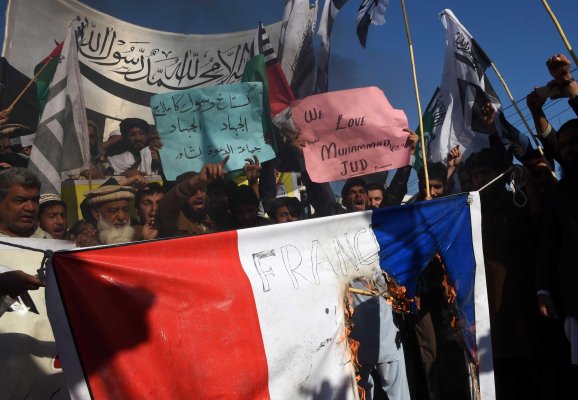