A Bad Day for Climate Change Deniers ... and the Planet

Deeper, hotter, sicker—and the oceans are only part of it
Roc Canals Photography; Getty Images/Flickr Select
Ideas
By Jeffrey Kluger
Jeffrey Kluger is Editor at Large for TIME magazine and the author of ten books, including Apollo 13, Apollo 8 and two novels for young adults. He has written more than 40 cover stories for TIME on topics ranging from space to human behavior to climate to medicine. Along with others at TIME, Kluger is an Emmy nominee for the web series A Year in Space.

It’s not often that the climate change deniers get clobbered three times in just two days. But that’s what happened with the release of a trio of new studies that ought to serve as solid body blows to the fading but persistent fiction that human-mediated warming is somehow a hoax. Good news for the forces of reason, however, is bad news for the planet—especially the oceans.

The most straightforward of the three studies was a report from NASA and the National Oceanic and Atmospheric Administration (NOAA) confirming what a lot of people who sweltered through 2014 already suspected: the year is entering the record books as the hottest ever since reliable records started being kept in 1880—and the results weren’t even close.

“Today’s news is a clear and undeniable warning for all of us that we need to cut climate pollution and prepare for what’s coming,” said Lou Leonard, vice president for climate change at the World Wildlife Fund.

When it concerns the ocean, what’s coming may already be here. A sobering study in Nature looked at sea level rise in both the periods from 1901 to 1990 and from 1993 to 2010 in an attempt to sort out a seeming inconsistency: measurements from 622 tide gauges around the world showed that levels had risen 6 in. (15.24 cm) over the past century, but computer models and other tools put the figure at only 5 in. (12.7 cm). Here too, what seems like a little is actually a lot: a single inch of water spread around all of the planet’s oceans and seas represents two quadrillion gallons of water.

This could have meant good news, since it might have indicated that we’d overestimated the impact of melting glaciers and ice caps. But new computer modeling recalculated the degree of sea level rise over the last century and found that the tide gauges had it right all along, and the only thing that was wrong was that sea levels had risen more slowly than believed in the 90 years that followed 1900, and much faster in the 17 years from 1993 to 2010 — close to three times as fast per year. What does that mean in the long term? Perhaps 3 ft. (0.9 m) greater increase by the end of this century if we keep on the way we’re going.

Finally, according to the journal Science, at the same time sea levels are rising higher, marine life forms are growing sicker, with a “major extinction event” a very real possibility. All through the oceans, the signs of ecosystem breakdown are evident: the death of coral reefs, the collapse of fish stocks, the migration of species from waters that have grown too warm for them to the patches that remain cool enough.

What’s more, the increase in the number of massive container ships crossing the oceans has resulted in a growing number of collisions with whales — encounters in which the animals wind up the losers. Seafloor mining and bottom-trawling nets both plunder fish populations and further damage the environment in which deepwater species can live.

No part of this bad-news trifecta is likely to change the minds of the rump faction of climate deniers — particularly in Washington. Texas Senator Ted Cruz, who is set to assume chairmanship of the committee that oversees science in general and NASA in particular had this to say to CNN about climate change: “The last 15 years, there has been no recorded warming. Contrary to all the theories that they are expounding, there should have been warming over the last 15 years. It hasn’t happened.”

He’s wrong on the facts — as the new temperature readings demonstrate — and wrong on his interpretation of the science which shows that the rate of atmospheric warming has indeed slowed a bit in the past decade and a half. The reason for that seeming happy development is not that climate change isn’t real, but that the oceans, for now, are sopping up more heat than anticipated—see, for example, those migrating fish.

Meantime, Cruz’s Oklahoma colleague Senator James Inhofe is set to become chairman of the Senate Environment and Public Works Committee. This is the same Inhofe who persists in his very vocal belief that climate change is “the greatest hoax ever perpetrated on the American people” and that even if it is true, it might actually be good for the world.

Ultimately, reason will prevail; in the long arc of scientific history it usually does. How much ocean and atmosphere and wildlife we’ll have left when that happens, however, is another matter entirely. 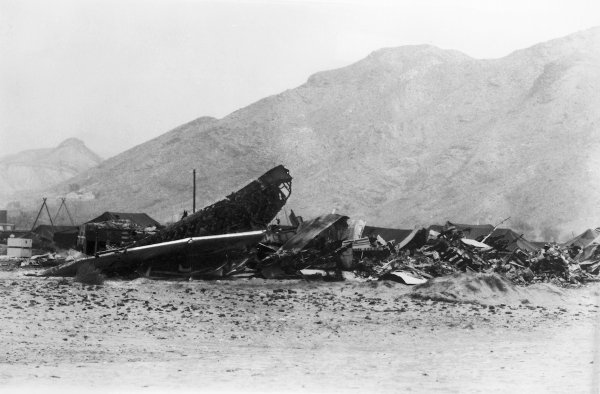 The Nuclear Disaster You Never Heard of
Next Up: Editor's Pick