5 Ways to Make Your Mac and iPhone Play Nice

Apple’s newest desktop operating system, Yosemite, is all about making Macs link up with iPhones and iPads in new and exciting ways. And with tricks like answering your phone calls on your Macbook and springing open emails from your lock screen, this so-called Handoff technology is certainly intuitive.

But when it comes to interoperability between Apple’s computers and mobile devices, there are still simple functions that are lacking. These five workarounds will help your iPhone, iPad, and Mac work better together — some of which Apple itself hasn’t even thought of.

1. Listen to the stories you don’t have time to read.

There’s only so much time in a day, but there is also an endless cascade of things to read on the Internet. Capti allows Mac (and Windows) users to flag webpages for listening to, not reading, later on.

The free solution involves planting a bookmark in your web browser’s favorite bar, which you click on when you come across something you don’t have time to devour with your eyes. This saves the page to Capti’s service, which you can open with your iPhone, using the Capti Narrator app. With speed settings and five different English-speaking voices (I’m partial to “Moira” and her lovely Irish brogue), the app adeptly turns printed words into podcasts.

2. Copy from one device and paste in another.

When you’re working with a computer, tablet, and phone, copying information to the clipboard on one can give you a digital form of phantom limb syndrome on another. That’s because that text you thought you captured isn’t where you need it to be.

Command-C is a great solution for wirelessly sharing your text or images. Begin by purchasing the $3.99 app from the Mac App Store, and follow suit by grabbing its free iOS companion for your iPhone and/or iPad. With all your devices on the same Wi-Fi network, pair them together using the apps. Then, copy text or an image on one device, and click on either the ⌘C menu bar icon on the Mac, or open the Command-C app on your device, to select where you want to clipboard to go.

Voila, it automatically gets loaded into the destination’s clipboard. And because Command-C uses Wi-Fi, it’s fully encrypted, keeping your data safe from other machines on the same network.

3. Abbreviate frequently typed phrases on all your Apple devices.

When most people think of keyboard shortcuts on Macs, Command-S for Save or Command-Q for quit typically spring to mind. But Apple has another kind of keyboard shortcut, allowing you can program your Mac or iDevice to automatically expand abbreviations, kind of like how spellcheck keeps making you type “ducking” instead of… well, you know.

Just click on the keyboard icon in your Mac’s System Preferences panel and select the “Text” column. There, you can type out — for the last time — all your most cumbersome strings of characters. For instance, I use “addy” to roll out my street address and “tjp” to unfurl a “Thanks, jpp” at the end of my emails.

If you come up with more painful turns of phrase while on your iPhone or iPad, navigate to Settings: General: Keyboard: Shortcuts to make additional abbreviations. And your codes work on all your machines, if you set up syncing via iCloud.

4. Turn your iPad into a second screen for your Mac.

A common sight in offices, dual monitors can be a huge productivity booster. But if you’re not a professional, or if you’re working on the road, a pair of monitors can be hard to come by. Duet Display is a $15 solution to a hundred-plus dollar problem, turning your iPad into an extra monitor.

Just download and run the free Mac OS app, purchase the iOS version from the App Store, and you’re in business. Built by former Apple engineers, the lag-free solution requires that you plug your iPad into your Mac, but gives you extra real estate in which to put an extra browser, email window, or YouTube video while you work.

5. Control all your devices with one (physical) keyboard.

Even though Apple brought third-party keyboards to iOS devices with its newest operating system, nothing beats the speed and accuracy of banging away on physical keys. The Logitech Bluetooth Multi-Device Keyboard lets you tickle the ivories on your Mac just like other keyboards, but with three different Bluetooth settings, you can also pair it to your iPhone and iPad for fast typing without having to hunt and peck on a touchscreen. At $49, the chiclet keyed peripheral is a no-brainer for anyone who has an iPad, iPhone and a computer, and that includes Windows users, because this keyboard works with PCs as well. 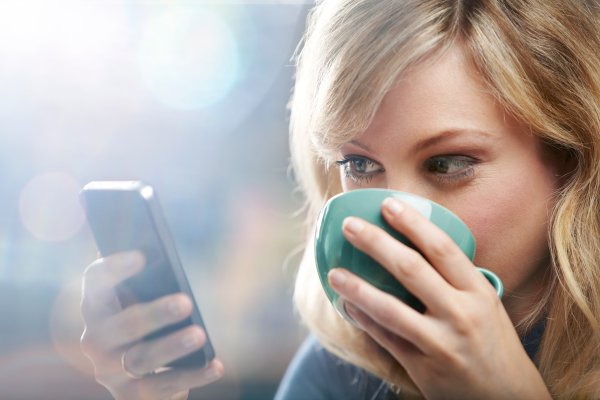 How to Save Your Voicemails Forever
Next Up: Editor's Pick