Officials across Europe were on high alert for terror threats Friday after a chaotic night in Belgium on Thursday that saw a deadly shootout in Verviers, counterterrorism raids across the country, and the arrest of 13 suspected militants.

The shootout in Verviers took place during a raid of a former bakery, when suspects opened fire on police. Two gunmen were killed and another was wounded and arrested during the confrontation. All three of the suspects have recently returned from Syria and were thought to be planning an attack on the police. Four Kalashnikov rifles, bomb-making equipment and police clothing were found after the raid, reports the Guardian citing local media sources.

“This operation stopped a major terrorist attack from taking place. You could say a second potential Paris has been averted,” federal prosecutor, Eric Van Der Sypt, told the Guardian, while authorities in Belgium raised the national terror alert level from 2 to 3, the second-highest level. Van Der Sypt told the Associated Press, “I cannot confirm that we arrested everyone in this group.”

Meanwhile, Jewish schools in Brussels and Antwerp were closed on Friday after authorities revealed they were a “potential target” for Islamist militants, reports the Guardian. An Orthodox Jewish school in the Netherlands was also closed as a precautionary measure, though there was no direct threat made against it.

In Paris, the scene of last week’s terrorist attacks that left 17 dead, authorities shut down and evacuated the Gare de l’Est train station early on Friday, after a bomb threat was made. A French police official told the Associated Press that the station was closed “as a precaution.” (No bomb was found.)

Paris is at its highest terrorism alert level. The prosecutor’s office reported that 12 people had been arrested during raids throughout the region, which targeted associates of the gunman, Amedy Coulibaly, who killed four people in a kosher supermarket and a policewoman last week, and claimed ties to the Islamic State in Iraq and Syria (ISIS). Coulibaly was killed at the market after a standoff with police, but his suspected accomplice and common-law wife, Hayat Boumeddiene, is still being sought by authorities.

Turkish authorities have said Boumeddiene crossed from Turkey into Syria on Jan. 8. Spanish authorities have reported that Coulibaly drove Boumeddiene from France to Madrid on New Year’s Eve and was with her until she took a Jan. 2 flight to Istanbul. Spain is still investigating what the couple did and who they contacted while in the country, and whether they had links with a terrorist cell in Spain.

Belgian police are also looking at possible links between a suspected arms dealer arrested in the southern town of Charleroi on Wednesday and Coulibaly; the man claimed that he wanted to buy a car from the Coulibaly’s wife, Van der Sypt told the AP. “At this moment this is the only link between what happened in Paris,” he said.

In Berlin, police arrested two men on Friday on suspicion of recruiting fighters for ISIS. They were taken into custody after a series of raids across the capital, which saw the search of 11 residences by 250 police officers. However authorities have said the raids were part of a months-long, ongoing investigation and not related to the recent attacks in Paris. 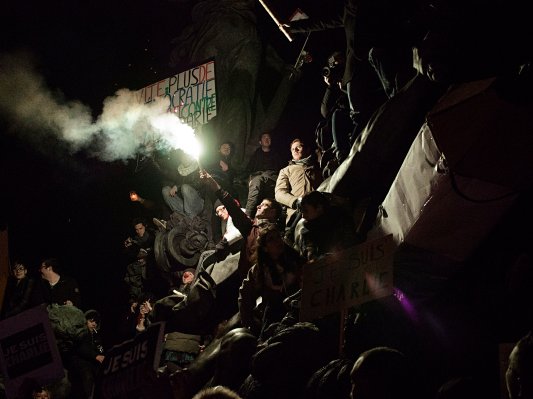 The European Front
Next Up: Editor's Pick