Wisconsin Governor Scott Walker left little doubt Thursday that he is planning to run for the White House in 2016.

Speaking to the Republican National Committee (RNC) at its winter meeting in San Diego, the union-busting Midwesterner cast himself as a “new, fresh leader,” laying out a clear rationale for his candidacy as a blue-state governor with a proven record of reforming government.

“I look at our country, and I’m worried about our country the same way that I was worried about my state back in 2009,” Walker said when discussing his two sons, craftily referencing the year he decided to launch his first campaign for the governorship.

“I want to share a vision: I think we have a unique opportunity going forward, not only for the good of this party, but more importantly for the good of the country, to find a new, fresh leader out there who can take big bold ideas, take ideas that come from of outside of Washington, from the states all the way down to the grassroots,” Walker added. “We need someone who hopefully has the backing and the track record of success, of showing that common sense conservative reforms can work not just in Wisconsin, but they can work all across America.”

Since winning re-election in November, Walker has been at work expanding his political operation to lay the groundwork for a presidential run. In recent weeks Walker hired former RNC political director Rick Wiley to serve as campaign manager. Before his address, he met privately with RNC members from the presidential early states of Iowa, New Hampshire, and South Carolina to discuss his likely bid. On Friday he is set to meet with San Diego-area donors, and is expected to launch a political group to boost his national profile in short order.

Walker’s 2012 recall election following efforts to dramatically weaken his state’s public-sector unions turned him into a cause célèbre for the Republican grassroots, and provides a convenient narrative to share on the campaign trail: besting a Democratic President and union allies three times in four years, in a state that hasn’t voted for a Republican President since Ronald Reagan. The experience allowed him to build a nationwide network of donors and supporters who will be essential when he formally declares. But Walker still struggles with name recognition, and seems unlikely to attract a cadre of high-dollar donors in a field with Romney, former Florida governor Jeb Bush and New Jersey Governor Chris Christie.

But Walker and his team are betting that his unassuming style — he joked he buys his suits off the rack at Kohl’s — and the ability to appeal to all corners of the party, will help him carry the day. In a warm introduction, RNC chairman Reince Priebus, a fellow Wisconsinite, paid his friend high praise. “Scott Walker’s a guy you want to have a beer with — a Miller Lite,” he said.

Walker’s workman-like address touched on his biography, record as governor and vision for the country, and included an obligatory critique of likely Democratic nominee former Secretary of State Hillary Clinton.

Walker said the onetime First Lady was one of the big losers along with Democratic congressional and gubernatorial candidates on election night last year.

“I believe in addition to offering a contrast, pointing out that Washington isn’t the place for the answers to the challenges that we face in this country,” Walker said, in an implicit contrast with his party’s Senators vying for the White House.

Walker’s speech was focused on laying out his principles, warning of American decline both at home and overseas. “The idea that the next generation might grow up in a country that’s not at least as great as the one we grew up in is fundamentally unacceptable,” Walker said. In a populist nod, the 47-year-old dad of two positioned himself as a candidate who would be more responsive to the party’s grassroots than special interests groups.

After his remarks, Walker was asked about Romney’s potential candidacy, saying only he was a “good man” before exiting the ballroom.

“What people don’t like about Washington are politicians who are more focused on helping the elite few than the middle class, and politicians who are more interested in dividing us than coming together to help the middle class,”DNC Communications Director Mo Elleithee said in a statement. “By those measures, Walker is the last guy to talk about any sort of new approach. He’s pushed tax cuts geared toward the wealthy, while Wisconsin has shifted toward a low-wage economy. And his divisive style has polarized state government in a way that would make Ted Cruz proud. Scott Walker has already taken the worst of Washington and brought it to Wisconsin.” 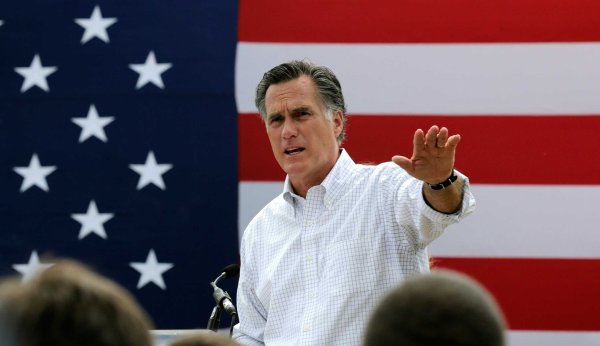 Romney Faces Skepticism as He Looks to 2016
Next Up: Editor's Pick