The History of Jews in France in 6 Key Moments

A member of the French Jewish community holds a sign during a rally in Jerusalem on Jan. 11, 2015, to demonstrate Jerusalem's support for France and the Jewish community there.
Gali Tibbon—AFP/Getty Images
By Noah Rayman

The deadly assault on a kosher supermarket in Paris on Friday confirmed the fears of many French Jews that anti-Semitism is a persistent and growing threat in France. Already, thousands of Jews have departed for Israel in the wake of 2012 shooting at a Jewish day school and an attack last year on the Jewish museum in Belgium.

The history of the Jewish community in France has, in some ways, been shaped by anti-Semitism—but it is also shaped by the type of support that coalesced around the Jewish community over the weekend. Prime Minister Manuel Valls declared that “France without Jews is not France” and an estimated 3.7 million people took to the streets in solidarity with the victims of last week’s violence.

The Jewish community in France “is not as isolated as we thought,” said French Chief Rabbi Haim Korsia after the march. “For months we have been asking where is France? Today we saw France, and the France we saw was a spitting image of biblical descriptions of Jerusalem, where brothers unite.”

To learn more about how the situation got the way it is for the Jewish population of France, TIME spoke with Maud S. Mandel, Dean of the College at Brown University and author of Muslims and Jews in France: History of a Conflict. Here’s a look at some of the key periods that have shaped the history of French Jews:

Within two years of the Revolution, France became the first country in modern Europe to grant Jews equal rights under the law, setting a precedent for France and a new standard for Europe as a whole. At the time, there were only about 40,000 Jews in France, living primarily in the country’s eastern Alsace-Lorraine region, but the process of Jewish emancipation that largely began with the Revolution would have a lasting impact.

2. Napoleon and the Great Sanhedrin

Still, the question of if and how to integrate the Jewish community into French society—a problem known at the time as “the Jewish question”—persisted after the Revolution and the rise of Napoleon Bonaparte, who was named French Emperor in 1804. “The hope by enlightenment philosophes and revolutionaries that supported Jewish emancipation was that that Jews would integrate into the state like everybody else and that their differences would diminish,” says Mandel. “Napoleon believed that such change wasn’t happening quickly enough, that Jews weren’t fully blending into the surrounding populations.”

Proposing to put the question to the Jewish people, in 1806 Napoleon convened an assembly of important leaders in the Jewish community to clarify their political and religious loyalties. A year later, religious leaders gathered for what was called the Great Sanhedrin, named after the Jewish high court in ancient Israel, to ratify the declarations of the assembly. Through this process, Napoleon effectively asked whether the allegiances of French Jews lay in the Jewish community or in the larger society, says Mandel. “That was a big moment, the Sanhedrin, because it was during this moment of political theater when Jews declared themselves first and foremost French citizens, and that’s where their primary political allegiances were,” she says. “And after that, over a period that took decades, successive generations of Jews integrated more fully because now they were citizens.”

The assumption that Jews had become an integral part of French society was rocked in the late 19th century. In 1894, Captain Alfred Dreyfus, who was Jewish, was convicted of spying for Germany, spawning a decade-long scandal. Dreyfus was eventually exonerated, but the period was marked by anti-Semitic riots and a vocal anti-Semitic press—as well as by equally vocal non-Jewish defenders of Dreyfus.

Jews in France interpreted the Dreyfus Affair in different ways, according to Mandel. For some, Dreyfus’s exoneration represented the triumph of French republican values over discrimination and xenophobia. “For many French Jews it was actually a sign that eventually the state would in fact side with justice and inclusion,” says Mandel. But for others, the scandal was proof that anti-Semitism was endemic to Europe. One of the people who felt that way was an Austro-Hungarian journalist reporting from Paris, Theodor Herzl—the man who would found the modern Zionist movement.

The Second World War had a devastating impact on Jews in France, as it did on Jewish communities across Europe. Even before the war, the influx of Jewish refugees and immigrants from Germany and Eastern Europe had sparked an anti-Semitic backlash. (At the turn of the century, there were about 80,000 Jews in France; by 1939, there were about 300,000.) In the wake of the German invasion, the newly installed Vichy government willingly helped the Nazis round up Jews in France, particularly from recent immigrant communities. It was a stain on French history with tragic repercussions: by the end of the war, more than 70,000 Jews were deported from France, of whom only about 2,500 would survive.

On the other hand, the high number of Jews in France who did survive the war spoke to the public’s reluctance to participate in the Nazi deportation. “Of the Jews who survived, many, many of them owed their lives to French citizens who hid them, to officials who dragged their feet, to the very fact that they were French and they had all kinds of connections in French society that allowed them to avoid the worst outcome,” Mandel says. “That didn’t mean they didn’t lose property and suffer great losses and hardship over the period of World War II. I think that’s where you see the tension in the French story.”

In the decades following the war, as France pulled out of Algeria, Tunisia and Morocco, large populations of Jews in those countries fled along with it. Many left for the newly established state of Israel, but others went to France. The migration north was most pronounced in Algeria, where the people already had French citizenship because of the special status of Algeria as a French colony; 90% of Jews in that country headed for France. The influx from North Africa doubled the Jewish population in France and introduced new customs to the increasingly diverse Jewish community. The North African Jews were also more willing than their predecessors in France to engage in politics along ethnic lines, coming out in force, for example, in support of Israel during the 1967 Six-Day War.

“Since that time, the Jewish community has been much more visible in support of Israel,” says Mandel. “It’s also been much more comfortable with expressing an ethnic politics within mainstream French political discourse.”

The arrival of Jews from North Africa coincided with a massive influx of Muslim migrant laborers, also largely from North Africa. While there were occasional clashes between these two immigrant populations, Jewish and Muslim immigrants often lived side-by-side in the early years, says Mandel. Beginning in the 1980s, however, tensions began to emerge, especially as the state failed to fully integrate the Muslim community into French society. “The difference was visible, and it caused resentment and interfered with their ability to work together because the needs of the two communities were so different,” says Mandel. Those tensions were only heightened by the ongoing Israeli-Palestinian conflict.

Still, Mandel distinguishes between those lingering tensions and the high profile attacks against Jews that have fueled fears of escalating anti-Semitism since the 2000s. Those, says Mandel, are linked to global Islamic terrorism. “I want to be really clear, that phenomenon does not run through and through France’s very diverse and large Muslim population,” she says. “It is one fringe element.”

Meanwhile, French Jews—the third largest Jewish population in the world after America and Israel—are more integrated into French society than ever before, says Mandel. “The tragic irony is that at the very moment at which we’re talking about the greatest spike in anti-Semitism in Europe since World War II,” she says, “is also a moment where we can underscore the ways in which prior former forms of anti-Semitism have significantly diminished.” 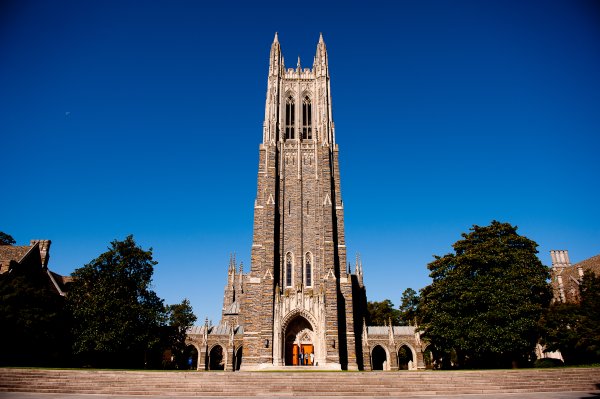 Duke Won't Broadcast Muslim Call to Prayer After All
Next Up: Editor's Pick