COMPARECARDS
SPONSORED
CaliforniaPatient in California Is Third in the U.S. Diagnosed with China Virus: Officials

Meet the Actress Who Performed the First Onscreen Orgasm

“Indecent and morally dangerous.” “Unsuitable, immoral and lascivious.” “Extremely audacious.” Reviews for 50 Shades of Grey? Not quite. Those are some of the criticisms which greeted Ecstasy, which first aired in theaters in 1933.

The Czech movie was the first non-pornographic film to feature a woman performing an orgasm onscreen, and it catapulted that woman—18-year-old Hedy Kiesler—into international stardom. In the movie, Kiesler—who would later be forced to change her name to Hedy Lamarr in an effort to distance herself from her salacious debut—played Eva, a young woman married to a much older man who also happens to be impotent. One day while swimming nude in a lake, her horse runs off with her clothing draped across its back. A naked Eva chases the horse through the countryside, in a scene that was scandalous for its nudity but G-rated compared to what comes later. The naked chase leads to what can only be called now, anachronistically, a meet-cute, with a strapping young man whom she later takes to bed.

At this point, it should be noted, Eva has fled her passionless marriage, but she’s not technically divorced. So when she does the deed with her young lover, it constitutes adultery, which was in 1933 as much a reason for public outcry as her sexualized performance. The sex scene itself—not surprisingly quite tame by today's standards—cuts between her hand grazing the rug on the floor, the pearls on her necklace scattering as she wrings them from her neck, and, most scandalously, her face contorting in accordance with the ecstasy of the moment (read: an orgasm). It ends, naturally, with a cigarette.

The film’s reception was, as with 50 Shades of Grey, divided chiefly between two camps. There were those, like the crowds at the International Film Exposition in Venice, who were entranced by its sensual beauty and received it (unlike 50 Shades) as an art-house film. And then there were those who deemed it filth, like the Pope (who denounced it in the Vatican newspaper); Kiesler’s then-husband (who sought to buy and destroy every copy he could find); the Catholic Legion of Decency (which condemned it); and U.S. officials (who confiscated the film under the indecency provisions of the Tariff Act).

The movie finally made it to the U.S. seven years later, though it was shown in limited theaters, without the seal of the Motion Picture Production Code, or Hays Code, which set out moral guidelines for the industry (banning profanity, nudity, images of childbirth, ridicule of clergy, miscegenation, and other now-outdated taboos) until it was replaced with the MPAA rating system in 1968. Kiesler, soon to be Lamarr, also made her way to America, escaping a controlling husband who also happened to be a Nazi.

While it’s tempting to celebrate Lamarr as a pioneer of female sexuality, she later claimed that as a fledgling teen actress, she hadn’t really know what she was getting into when she took the part. And the publicity the role generated would plague her in the years to come. She was known for years as simply “Ecstasy Girl,” and she told LIFE in 1938 that people gawked at her like “I am something in a zoo.” Her studio was careful to desexualize her image just the right amount for her next film, Algiers. As LIFE put it, “Extase, naturally, focused attention on her bodily charms. With these under Hays Office taboo, Algiers has to be content with her face. It is no hardship.”

Anne Helen Petersen, author of the book Scandals of Classic Hollywood, has noted that although Lamarr was not the most talented actress of her day, she nonetheless found it difficult to be taken seriously for anything beyond her sultry looks. “Over her Hollywood career, she would be cast as one ‘high class whore’ after another—women whose beauty, and sexuality, make them natural victims of the world around them.” And with her six failed marriages, she was a regular fixture of the Hollywood gossip mill.

Lamarr’s beauty also made it difficult to get much recognition for her brains. Along with the composer George Antheil, she invented and patented a frequency-hopping technology that allowed missiles to go undetected. Though not implemented in time for use during WWII, it did play a role in the Cold War, even contributing to the deescalation of the Cuban Missile Crisis.

Lamarr, who died in 2000 at 85, helped create the world of modern cinema where Dakota Johnson can now be (for better or worse) tied up, blindfolded and whipped onscreen more than 80 years later. But she also, with her patent, laid the foundation for Wi-Fi, Bluetooth and cellular technology. Though she was honored later in life for the latter achievements, she spent most of her life living with the fallout from the former. 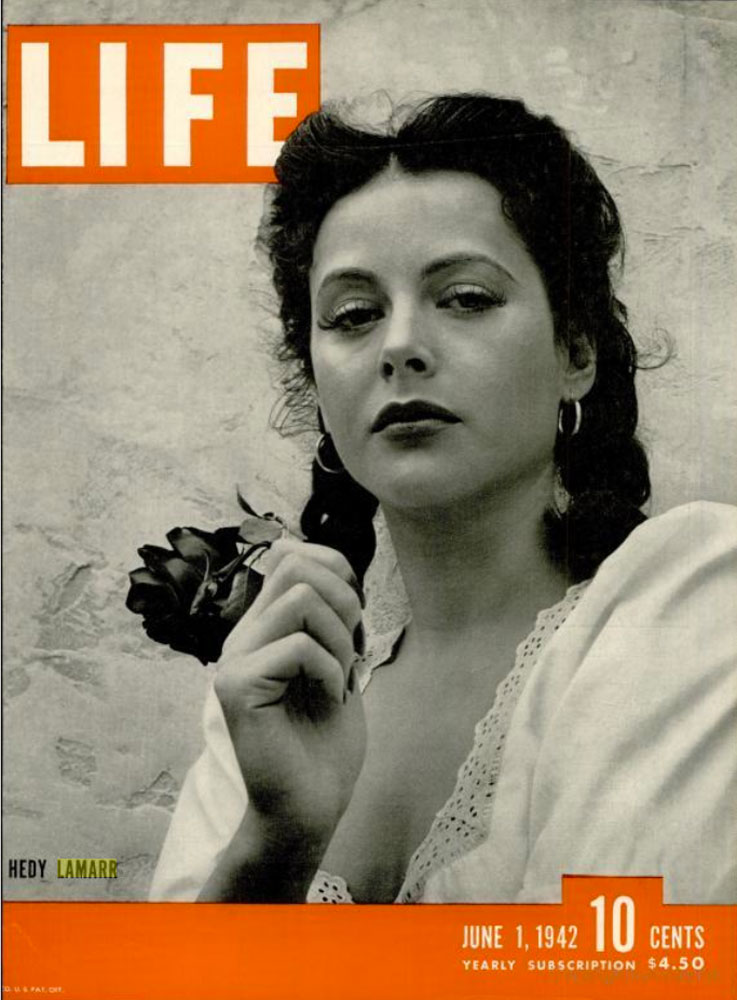