Life goes on at this Jewish bakery in the Marais, a traditionally Jewish quarter in Paris, France, Jan. 11, 2015.
Julien Pebrel—MYOP for TIME
By Ilene Prusher/Jerusalem

A few months ago, Pnina and Raphael Kaufmann decided enough was enough. Their six-year experiment of life in Israel was at an end. They decided to move to Strasbourg, a French city near the German border. Though it’s where Raphael Kaufmann grew up, moving back to France wasn’t what they’d expected when they moved to Israel in 2008.

At the time, Kaufmann and his wife Pnina, both lawyers, saw a disturbing rise of anti-Semitism in France and thought that Israel would be a far better place to raise their growing family.

The jobs they had found had little security and were paid far less than they were paid in France. Raphael found a new position in France last year and started commuting twice a month, meaning he was away from his family at least half the time. It was especially hard on their four children.

“There are many French Jews who emigrate to Israel, and afterwards many of them go back, because it’s too hard to make a living in Israel,” says Pnina Benjamin Kaufmann, who, along with her husband, found it difficult to requalify as a lawyer in Israel. “There are tons of people who have university degrees and professions and they find it’s impossible to work in the field, or the pay for other jobs is just too low.”

Theirs is a real but less celebrated side of the story of Jews leaving France for Israel, a trend that is predicted by the Jewish Agency, the organisation that encourages migration to Israel, to increase following the killing of four French Jews in an attack at a Paris supermarket last Friday. In 2014, 7,000 French émigrés arrived in Israel, twice the number from the year before. Jewish Agency Chairman Natan Sharansky estimates French immigration will more than double this year to 15,000. The Israeli government doesn’t keep track, however, of how many new immigrants ultimately leave. And while Israel gives a wide-ranging benefits package to its newcomers to enable an easy landing in the country, for some people it’s not enough.

“When you hear Sharansky come out and say they’ll get 100,000 French Jews coming to Israel,” or close to a fifth of the Jews living in France overall, “I say, but then what? How are they going to integrate all of those people?” Benjamin Kaufmann asks. “They need to improve the way they recognize foreign diplomas and open up the job market properly.”

Mickael Bensadoun agrees that new arrivals need support. He left France for Israel in 2001 and for the past eight years he’s been the CEO of an organization called Gvahim, which helps ease the transition of young and well-educated French immigrants into the Israeli labor market by finding them internships and job placements. It’s challenging enough for Israelis to find good jobs, he notes, and most immigrants have the additional handicap of not having native-level Hebrew. What’s more, the cultural gap means the French “don’t interview well,” he says.

“The number-one problem is employment. You interview very differently in France than in Israel,” Bensadoun tells TIME. “In French culture, you’re very modest about saying you’re good at something, but in Israel it’s different, you talk yourself up and you need to sell yourself very aggressively.” Israeli employers, meanwhile, often look at a resume and see names of schools in France they don’t recognize, and end up undervaluing the level of education the newcomers arrive with, or won’t recognize their qualifications in heavily regulated professions.

With the French economy in a slump in the last few years, there has been an additional lure for French Jews to come to Israel. The economy in Israel is growing but the country has rather low wages compared to other OECD countries, putting Israel on a par with countries such as Spain, Slovenia, and Greece. Throw in the high cost of living and exorbitant real estate prices, and many find it difficult to survive. Exasperation with these trends led to a massive social protest across Israel in 2011 that resulted in few noticeable reforms. In recent months, there has been much controversy over Israelis moving abroad — to Berlin in particular — after having grown exasperated with the Israeli economic situation.

“A very important element is that for young people it is almost impossible to buy apartments unless you have very well-to-do parents. The housing in Berlin is much cheaper,” says Uri Avinery, a peace activist and former politician who regularly comments on the plight of new immigrants. Avinery says that he sees the impact of the situation when he asks after his friends’ children, and finds many of them are in Europe or the U.S.

“There’s a big outcry for the French to come here, but there is no affordable housing and there are no jobs,” he tells TIME. “It’s a gut reaction to call on them to come, but this gut reaction does not translate into initiatives, and many of them will find it impossible to stay.”

Joel Bloch, a hi-tech entrepreneur who came to Israel in 2006 and opened his fifth start-up about two years ago, says that many French immigrants like him are staying tied, professionally and economically, to France. Bloch’s company Tag’by is based in Tel Aviv but most of its business in France. That means that he flies to France at least once a month, sometimes twice.

“When you keep your business in France completely, and your personal life is here, that makes it difficult to integrate. It makes for a kind of schizophrenia,” says Bloch.

Besides the economic struggle, of course, there is the challenge of living in a place with a perennially unsolved conflict, and wars that seem to erupt nearly every two years. “When we had the war here this summer, all our family back in France was afraid for us,” says Bloch, “but right now we’re afraid for them.” 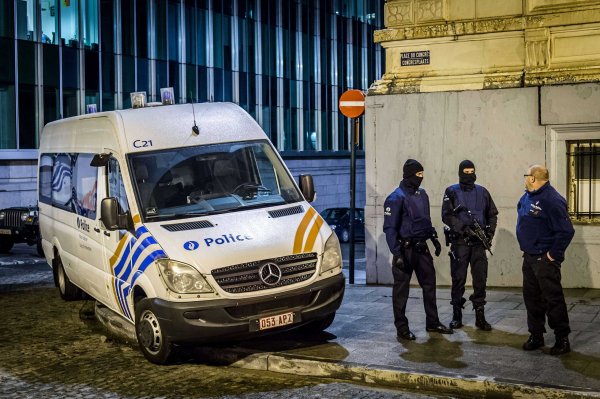 Europe On High Alert Following Shootings and Arrests
Next Up: Editor's Pick