How Evangelicals Are Changing Their Minds on Gay Marriage

If evangelical Christianity is famous for anything in contemporary American politics, it is for its complete opposition to gay marriage. Now, slowly yet undeniably, evangelicals are changing their minds.

Every day, evangelical communities across the country are arriving at new crossroads over marriage. My magazine story for TIME this week, “A Change of Heart,” is a deep dive into the changing allegiances and divides in evangelical churches and communities over homosexuality. In public, so many churches and pastors are afraid to talk about the generational and societal shifts happening. But behind the scenes, it’s a whole different game. Support for gay marriage across all age groups of white evangelicals has increased by double digits over the past decade, according to the Public Religion Research Institute, and the fastest change can be found among younger evangelicals—their support for gay marriage jumped from 20% in 2003 to 42% in 2014.

Here are few of the topline findings of my reporting. (To read the full story, click here.)

This winter, EastLake Community Church outside Seattle is quietly coming out as one of the first evangelical megachurches in the country to support full inclusion and affirmation of LGBTQ people. It is almost impossible to overstate the significance of this move. EastLake is in many ways the quintessential evangelical megachurch–thousands-strong attendance, rock-music worship, Bible-preaching sermons. But pastor Ryan Meeks, 36, is on the front wave of a new choice. “I refuse to go to a church where my friends who are gay are excluded from Communion or a marriage covenant or the beauty of Christian community,” Meeks tells me. “It is a move of integrity for me—the message of Jesus was a message of wide inclusivity.”

Conversation about gay marriage is no longer seen as an automatic compromise on Biblical authority. Other big-time evangelical pastors like Andy Stanley of North Point Community Church in Atlanta and Bill Hybels of Willow Creek do not go as far as Meeks, but they are talking with congregants and other evangelical leaders about how to navigate the changes they are seeing in their pews. Hybels has been meeting privately for the past year with LGBTQ congregants to learn to better understand their stories. At the Southern Baptist Convention’s three-day, October bootcamp to train more than 1,300 evangelicals to double down against gay marriage, Stanley met together with both LGBT evangelical advocates and SBC leaders for a closed-door conversation about whether their different views on gay marriage put them outside the faith. Jim Daly, president of Focus on the Family, has developed a friendship with LGBT activist Ted Trimpa and the Gill Foundation, and they are working together on topics like passing anti-human-trafficking legislation.

Evangelical colleges are both taking half-steps toward inclusion and then doubling-back to avoid appearance of change. Wheaton College for example, Billy Graham’s alma mater outside Chicago, hired a celibate lesbian in its chaplain’s office to help guide an official student group for students questioning their sexual identity, and yet also invited a former lesbian now married to male pastor to address the student body.

Elsewhere, evangelical leaders like Russell Moore of the Southern Baptist Convention’s Ethics and Religious Liberties Commission deny a generational shift is underway. New activists, leaders like Moore and others believe, often are not actually still evangelicals but revisionists who do not support traditional Biblical authority. Plus, Moore says, for evangelicals to keep views that are out-of-step with societal changes is par for the course. “We believe even stranger things than that,” he says. “We believe a previously dead man is going to arrive in the sky on a horse.”

Then there’s the growing slew of evangelical LGBTQ activists pushing for change. Matthew Vines, 24 and founder of the Reformation Project, represents new momentum to change the evangelical tide. He hopes to raise up affirming evangelicals in every evangelical church in the country. He holds conferences and training sessions for evangelicals, has staff in three states and representatives in 25, and has raised a projected $1.2 million for 2015 to press ahead. Brandan Robertson, 22, is the national spokesperson for Evangelicals for Marriage Equality, an effort started by millennials to help evangelicals support civil gay marriages, if not marriages in churches. Justin Lee, 37, of the Gay Christian Network hosted his 11th annual conference last week in Portland, Ore., and 1,400 people attended, double the number who came last year. Lee’s friendship with Alan Chambers, the former head of the ex-gay organization Exodus International, was one of the key factors that led Chambers to apologize for the hurt his organization caused, and the organization shut down.

For everyone on all sides, the Bible itself is at stake. And, religious change takes decades, centuries even, when it happens at all. But with each passing day it is becoming harder and harder to deny that change is indeed coming. Meeks put it this way: “Every positive reforming movement in church history is first labeled heresy. Evangelicalism is way behind on this. We have a debt to pay.” 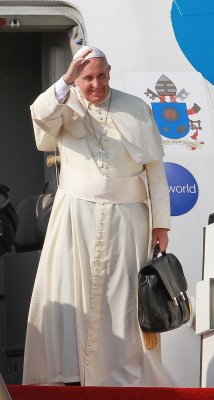 Pope Francis to Make American Missionary a Saint
Next Up: Editor's Pick