Pope Francis traveled to a former conflict zone in northwest Sri Lanka on Wednesday, calling for “reconciliation, justice and peace” during a prayer at a Catholic shrine damaged during the bloody civil war that convulsed the island nation for nearly three decades.

For years, the shrine of Our Lady of Madhu—located deep in the Tamil-dominated north that saw some of the fiercest fighting during the conflict between the country’s predominately Sinhalese government and Tamil separatists—was off limits for most believers. In April 2008, about a year before the end of the war, priests briefly removed the Madhu Matha—a 2-ft. icon of the Virgin Mary that forms the centerpiece of the shrine—for safekeeping as government forces pushed up north.

“There are families here today which suffered greatly in the long conflict which tore open the heart of Sri Lanka,” Pope Francis said, as a giant crowd reported to be half-a-million strong gathered to witness his arrival at the shrine. “Many people, from north and south alike, were killed in the terrible violence and bloodshed of those years.”

Among those listening him to were about 1,000 men and women disabled during the civil war, which claimed an estimated 70,000 lives. “This is a special occasion for them, they want to hear the Holy Father speak of the suffering here, so that the world’s eyes will open [to the] people still suffering here,” said Ramsiyah Pachchanlam, who works with a local organization that helps men and women wounded and disabled in the conflict.

The Pope’s arrival in Sri Lanka on Tuesday, days after the unexpected ouster of wartime leader Mahinda Rajapaksa in Presidential elections earlier this month, marked the first papal visit to the country since the end of the war. Rajapaksa’s successor, Maithripala Sirisena, has pledged to hold an independent domestic inquiry into wartime rights abuses, a contentious topic for many among the country’s majority Sinhalese and minority Tamil communities. Both government forces and Tamil separatists stand accused of serious human rights violations during the war.

“No Sri Lankan can forget the tragic events associated with this very place, or the sad day when the venerable statue of Mary, dating to the arrival of the earliest Christians in Sri Lanka, was taken away from her shrine,” the Pope said at the shrine.

“May all people find here inspiration and strength to build a future of reconciliation, justice and peace for all the children of this beloved land,” he added. 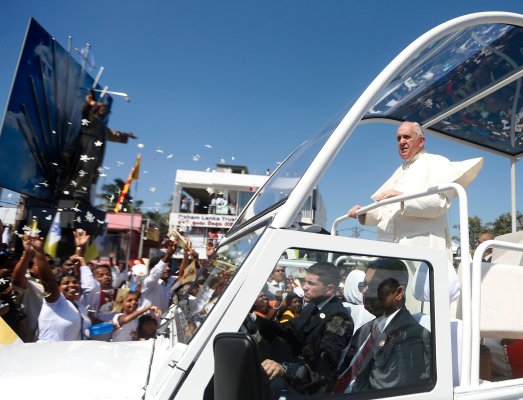 Pope Urges 'Truth' in Sri Lanka
Next Up: Editor's Pick