United States hostages departing an airplane on their return from Iran after being held for 444 days, in January of 1981
Express / Getty Images
By Jennifer Latson

When the Iran Hostage Crisis ended on this day, Jan. 20, in 1981, 52 Americans were freed after being subjected to “acts of barbarism,” as President Carter phrased it, for 444 days.

The crisis had started with American support for the Iranian Shah in the 1970s; when Iranian revolutionaries declared him anti-Islamic and forced him from office in 1979, they quickly moved on to their next target: the American embassy in Tehran, where a group of students took more than 60 people hostage. Iran’s new leader released those among the group who were female, black or non-U.S. citizens, saying that they had already suffered “the oppression of American society.”

Called spies by the Iranians, they were physically and mentally tormented to an extent the American public was unaware of at the time. It was later reported that, in addition to regular beatings, they were subjected to mock firing squads and games of Russian roulette. Many of the hostages later said they never expected to survive the ordeal; TIME reported that one of Iran’s Foreign Ministers thought the hostages could be held “more or less forever.”

Though he was wrong, the situation did end up costing President Carter the 1980 election, many believe, since it was hard to appeal to the public when, for more than a year, the evening news regularly broadcast images of angry Iranian mobs shouting “Death to America” and “Death to Carter.”

But as for the hostages themselves, they had mixed feelings for Carter, whose policies could be blamed for getting them into the crisis, but who worked with single-minded devotion to get them out. During his last few days in office, he worked nearly around the clock on the final negotiations that secured their release, occupying the Oval Office until 15 minutes before Ronald Reagan arrived for his inauguration.

The hostages were released minutes after Reagan was sworn in. Carter flew to Germany to meet with them. The encounter was bittersweet. According to the New York Times’ account, the hostages sat in a circle, passing around copies of American newspapers Carter had brought with him, all bearing headlines about their release. Some were critical of the former president. One asked why a botched rescue mission Carter had authorized the previous spring hadn’t been tried sooner; another asked whether it should have been attempted at all.

But they applauded when he said that the Iranians had not succeeded in their attempts to extort money from the U.S., using the hostages as leverage.

When Carter left, L. Bruce Laingen, the ranking diplomatic officer among the former hostages, escorted him to his limousine. According to the Times, “Mr. Laingen embraced the former President once, held him at arms length and then embraced him a second time before letting him go.”

Read a 1981 account of what the hostages went through, here in the TIME Vault: The Long Ordeal of the Hostages 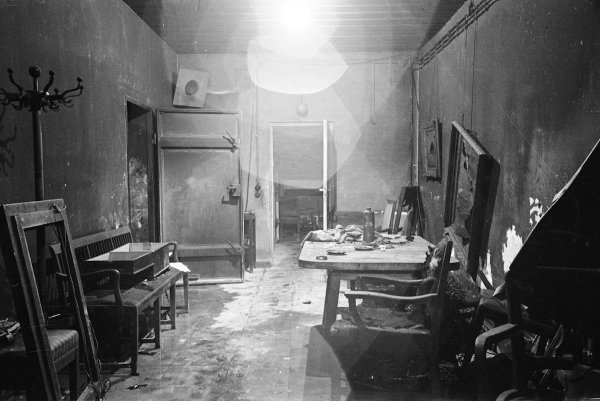 The Brief Luxurious Life of Adolf Hitler, 50 Feet Below Berlin
Next Up: Editor's Pick