Why Charlie Hebdo Gets More Attention Than Boko Haram

A man injured in a suicide blast is transported to the General Hospital in the northeast town of Potiskum, Nigeria on Jan, 12, 2015.
Aminu Abubakar—AFP/Getty Images
Ideas
By Charlotte Alter
Charlotte Alter is a national correspondent for TIME

A series of attacks, both in the name of Islamist extremism, occur in the same week. Three linked attacks kill 17 in Paris, another kills at least 150 in Nigeria (but perhaps up to 2,000). Guess which one gets most of our attention?

Many are calling the Jan. 7 attack on the office of Charlie Hebdo an attack on freedom of speech, or even an assault on Western values as a whole. Yet elsewhere in the world, those same values are being threatened by other extremists who want to spread fundamentalism. I’m talking, of course, about Boko Haram, the Islamist terrorist group in Nigeria that kidnapped 276 schoolgirls from their dorm last spring, murdered up to 2,000 civilians in Baga last week (although the bodies have not yet been officially counted), and over the weekend used a 10-year old girl as a suicide bomber to kill at least 16 people at a market (two other young girls wearing suicide vests killed three people in a separate attack.)

These attacks aren’t just brutal, they’re also part of a larger assault on freedom of religion and democracy, since the group targets Christians, non-Muslims, and anybody suspected of opposing their efforts to establish an African caliphate. Baga was reportedly perceived to have loyalties to the Nigerian government instead of Boko Haram, and the attack comes just weeks before Nigeria’s 2015 presidential election. Boko Haram, like many Islamist fundamentalist groups, oppose democratic elections.

Yet after the overwhelming global show of support for France in the wake of the Paris attacks, many are asking why there wasn’t similar widespread solidarity for Nigeria where far more people were killed. The hashtag #IamBaga, a variation on #JeSuisCharlie, has recently begun circulating to call attention to the massacre in Baga, a slaughter that Amnesty International is calling the group’s “deadliest act.” A Catholic Archbishop in Nigeria has called on the world community to support Nigeria the way it supported France. But even if you consider the brief blast of global awareness during last spring’s #BringBackOurGirls campaign, these calls to action seem feeble compared to the millions of marchers and more than 40 world leaders who flooded the streets of Paris this weekend.

No major dignitaries showed up in Abuja to support the Nigerian government after the Baga attack. In the week since the attack on Charlie Hebdo, the French terror plot has been the main headline in the national edition of the New York Times every day, but the most recent Boko Haram attack hasn’t appeared once on the front page. It wasn’t on the cover of the New Yorker. Nobody wore #IamBaga buttons at the Golden Globes.

Of course, the two tragedies are incomparable, as tragedies usually are. The reports coming out of Baga are still sketchy, and there’s not yet an official death toll because Boko Haram still controls the area. The details of the Charlie Hebdo attacks were immediately available, and were accompanied by compelling video that quickly dominated every major news network. French President Francois Hollande is somewhat unpopular, but at least he responded quickly and effectively to the attack. Nigerian president Goodluck Jonathan has been widely criticized for his incompetence at stopping Boko Haram– Jonathan released a statement condemning the Paris attacks, but his government reportedly played down the death toll in Baga. More importantly, the attack in Paris was largely unprecedented (Charlie Hebdo was firebombed in 2011, but nobody was hurt), while the massacre in Nigeria is part of a long string of Boko Haram attacks that some are even calling a “war“: the group killed over 10,000 people last year, according to the Council on Foreign Relations, and 1.5 million have fled their homes since the insurgency started. Plus, the fact that the Charlie Hebdo attack was a dramatic ambush of journalists may have added a layer of panic to the media coverage.

“The psychological distance between us and France is smaller than the psychological difference between us and Nigeria,” explains Paul Slovic, a professor of psychology at University of Oregon and president of Decision Research, a non-profit research institute that studies decision-making. “There’s a sense of personal vulnerability [in the Paris attack] that I don’t think one gets from the Boko Haram attacks,”

MORE How we failed the lost girls kidnapped by Boko Haram

A recent Pew survey tracking American news interest in foreign terrorist attacks found that Americans were overwhelmingly more interested in attacks that happen in other Western countries or attacks on children. The 2005 train bombings in London and the 2004 killing of Russian children by Chechen rebels were the most closely watched by Americans (48% saying they’d followed each event closely), followed by the 2004 bombings in Madrid and the 2007 car bomb scare in London (34% said they followed those stories). 29% of Americans closely followed the most recent Paris attacks.

The only terrorists attacks in non-Western countries that got significant American attention were attacks on destinations that attract affluent visitors. For example, 29% said they closely followed the 2008 attack of Mumbai’s Taj Hotel. 25% followed the attack on an upscale mall in Nairobi, Kenya in 2013, and 20% followed the bombing of a nightclub in Bali, Indonesia in 2002. Recent terrorist attacks in Afghanistan, Iraq and at a Pakistan school didn’t make the list.

“We tend to empathize more with people that we feel are more ‘like us,'” says Marco Iacoboni, a psychiatry professor at UCLA. “I think in this case, cultural, anthropological differences can play a big role in how much we empathize with others. I jokingly call this the ‘dark side’ of empathy.”

On Wednesday, video surfaced of Boko Haram leader Abubakar Shekau praising the attacks in Paris, saying, “We have felt joy for what befell the people of France in terms of torment, as their blood was spilled inside their country.” It’s a chilling tribute that reminds us that when terrorism flourishes anywhere, it strengthens terrorists everywhere.

MORE Bunnies, stinkbugs, and maggots: the science of empathy 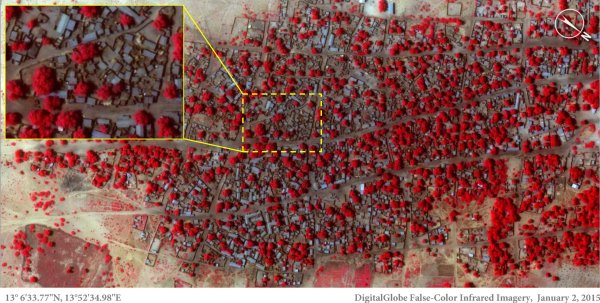