President John F. Kennedy wipes his forehead as he delivers the State of the Union address before Congress in Washington, DC, in January 1963
AFP/Getty Images
By Lily Rothman

With great power comes great responsibility. The oft-quoted Spider-Man line dates back, in one form or another, to Spidey’s earliest days, in the 1960s — but for at least a century before that, U.S. Presidents have been saying pretty much the same thing.

The constitution requires the President to talk to Congress about the state of the union — though the fact that he does so annually and with an in-person speech is more a matter of tradition — so the record of such addresses dates all the way back to 1790. Unsurprisingly, the themes evolve: early messages tended to focus on whether the U.S. stood a chance of continuing to exist; those in the middle years, which were not delivered as speeches, read more like interoffice memos; more recent ones, especially since they began to be broadcast to citizens, are full of feel-good inspiration.

But one theme has been constant: with great power comes, well, you know…

Abraham Lincoln in 1862: “We know how to save the Union. The world knows we do know how to save it. We, even we here, hold the power and bear the responsibility. In giving freedom to the slave we assure freedom to the free–honorable alike in what we give and what we preserve. We shall nobly save or meanly lose the last best hope of earth.”

William McKinley in 1899: “Presented to this Congress are great opportunities. With them come great responsibilities. The power confided to us increases the weight of our obligations to the people, and we must be profoundly sensible of them as we contemplate the new and grave problems which confront us. Aiming only at the public good, we cannot err.”

Theodore Roosevelt in 1902: “As a people we have played a large part in the world, and we are bent upon making our future even larger than the past. In particular, the events of the last four years have definitely decided that, for woe or for weal, our place must be great among the nations. We may either fall greatly or succeed greatly; but we can not avoid the endeavor from which either great failure or great success must come. Even if we would, we can not play a small part. If we should try, all that would follow would be that we should play a large part ignobly and shamefully.”

Calvin Coolidge in 1923: “The time has come for a more practical use of moral power, and more reliance upon the principle that right makes its own might. Our authority among the nations must be represented by justice and mercy. It is necessary not only to have faith, but to make sacrifices for our faith. The spiritual forces of the world make all its final determinations. It is with these voices that America should speak. Whenever they declare a righteous purpose there need be no doubt that they will be heard. America has taken her place in the world as a Republic–free, independent, powerful. The best service that can be rendered to humanity is the assurance that this place will be maintained.”

Franklin D. Roosevelt in 1945: “We cannot deny that power is a factor in world politics any more than we can deny its existence as a factor in national politics. But in a democratic world, as in a democratic Nation, power must be linked with responsibility, and obliged to defend and justify itself within the framework of the general good.” (FDR would have loved Spider-Man, if it’s any indication that his 1938 address also said that “in every case power and responsibility must go hand in hand.”)

John F. Kennedy in 1963: “In short, both at home and abroad, there may now be a temptation to relax. For the road has been long, the burden heavy, and the pace consistently urgent. But we cannot be satisfied to rest here. This is the side of the hill, not the top. The mere absence of war is not peace. The mere absence of recession is not growth. We have made a beginning–but we have only begun.”

As for whether 2015 will add another quote to this list, we’ll find out on Tuesday, when President Obama delivers the State of the Union. 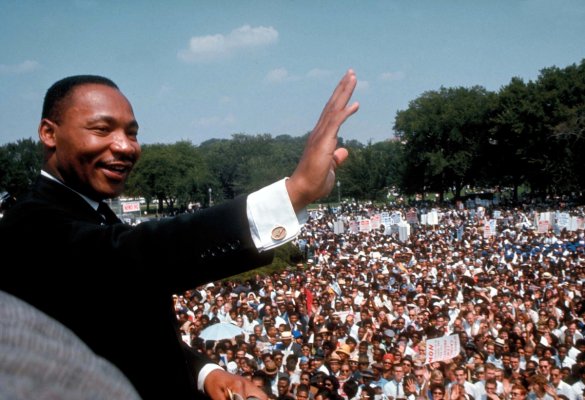 How MLK Day Became a Holiday
Next Up: Editor's Pick