Amal Alamuddin Clooney and the Rise of the Trophy Husband

It started when she arrived on the red carpet, the star of the Golden Globes show, the woman who came across as the big winner at last night’s ceremony. The funny thing is, she wasn’t nominated for anything. She has never even been in a movie or TV show or even a high school musical. But the Guardian got it exactly right when it said, “Human rights lawyer Amal Clooney and her husband have arrived.”

It’s not an overstatement to say everyone fell in love Sunday night with Amal Alamuddin Clooney, the woman who finally nabbed confirmed bachelor George Clooney.

I can’t say it better than Amy Poehler and Tina Fey (can anyone say anything better than these two?), who joked, “Amal is a human rights lawyer who worked on the Enron case, was an adviser to Kofi Annan regarding Syria and was selected for a three-person U.N. commission investigating rules of war violations in the Gaza Strip. So tonight her husband is getting a lifetime-achievement award.”

On the red carpet, when asked what she was wearing, Amal didn’t discuss the designer who made her dress (it was Dior), perpetuating the marketing scam in which celebrities, the richest people around, are paid hundreds of thousands of dollars by billionaire designers to get attention for their gowns. No, she pointed out that there was a “Je Suis Charlie” button on her purse to show solidarity with the men and women of Charlie Hebdo who were killed by terrorists for exercising their right to free speech. She couldn’t care less about the garment industry; there are real-world issues that she wants to give attention to.

She wasn’t the only celebrity to show solidarity with our brothers and sisters in Paris, but she was one of the few wearing gloves on the red carpet, a choice many of the professional fashion advisers thought was tacky. But Amal does not care. Those gloves said, “O.K., fine, I will play along and get dressed up in formal wear for this event, but I think these gloves are cute and I’m wearing them, and I don’t care how many episodes of Fashion Police I’m on because I don’t even own a television set, so there.”

When George finally had his big moment, he tried to make it not about himself but about his wife and the Charlie Hebdo attacks. “Amal, whatever alchemy brought us together, I couldn’t be prouder to be your husband,” he said, before reminding people about what was going on in France. Clooney’s speech tried to take away the importance of his movie roles (remember Leatherheads, anyone?), and instead focused on what is important—and that is Amal. Even George defines himself not as a movie star but as a man who is married to an amazing woman. He could have settled for Stacy Keibler or Renée Zellweger, but instead he married an Oxford graduate who could probably beat Hillary Clinton for President, if only she were American.

MORE Review: From Cosby to Charlie, This Golden Globes Had Something to Say

Husbands were getting ignored all over the place Sunday night. Channing Tatum, currently one of the biggest box-office draws in Tinseltown, was on “train patrol” for his wife, the much-lesser-known Jenna Dewan Tatum, fanning out her long dress for the wide shots on the red carpet. When Naomi Watts and Liev Schreiber walked down the red carpet, he was generally ignored next to his wife, even though they were both nominated. That’s what being on television will do to you, Liev. Reese Witherspoon’s power-agent husband was with her at her table inside the event, but Cheryl Strayed, the woman she played in Wild, was the one who walked beside her when they stood next to Ryan Seacrest.

Maybe Reese’s man just didn’t want any part of the spectacle. When the camera would cut to her at any time during the evening, it was like she was considering all the things she would rather be doing with her time, like fighting for civil rights and making the world a better place. For her part, Amal looked like she was barely tolerating being there, like a wife dragged to her husband’s boring work dinner. And that’s all this was with her in attendance: someone else’s professional convention.

In fact, having Amal at the ceremony certainly threw the whole thing into perspective and threatened to undermine the legitimacy of the proceedings. We’re being duped into thinking that very rich people who are given every advantage in life, getting more accolades and awards, is somehow news. That it is something that should be covered rapturously by every news outlet in the world, with even more slide shows and reviews than the protests in Paris or Ferguson or wherever they’re happening these days.

When George drags Amal to the Golden Globes, we realize how petty these awards truly are, just more of Hollywood breaking its arm patting itself on the back and duping us into buying more movie tickets, watching more shows, consuming more commercials, feeding the consumerist beast that Amal Clooney is trying to fight back into a cage every damn day. We always thought that she was the woman who finally snared George Clooney, but it’s the other way around. And we’re all better off for it.

Moylan is a writer and pop-culture junkie who lives in New York City. His work has appeared in Gawker, Vice, New York magazine and a few other safe-for-work publications.

Read next: Great Storytelling Was the Real Winner at the Golden Globes 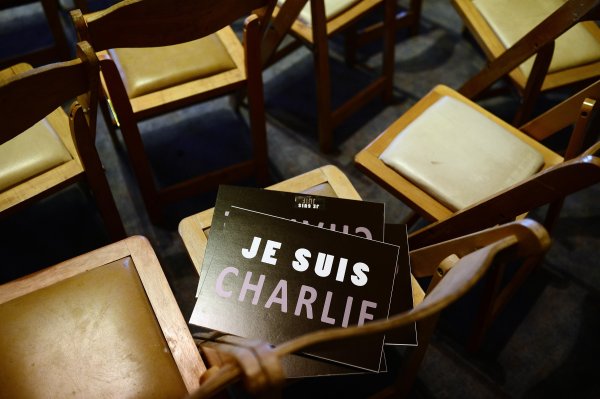 Charlie Hebdo Afflicted Us With Free-Speech Hindsight
Next Up: Editor's Pick