French Intelligence Warns That There Might Be Worse Attacks to Come

The French intelligence community believes that last week’s attacks in Paris which left 17 people dead could be a prelude to even more lethal attacks, a former counterterrorism official has warned.

Yves Trotignon, a former top counterterrorism official in DGSE, France’s equivalent to the CIA, told TIME on Monday, “There is a strong feeling that this is not over.” Trotignon, now a private terrorism consultant, said he was in close contact with French intelligence officials investigating last week’s attacks. He said most believe that although the instigators of last week’s attacks might all now be dead, “there is a strong feeling that maybe something more dangerous is ahead.”

French police said Monday that up to six members of the terrorist cell believed to be responsible for last Wednesday’s attacks may still be at large, the Associated Press reports. One was reportedly spotted driving a car registered to the widow of one of the attackers.

On Sunday more than a million people marched the streets of Paris in a show of defiance against terrorism after the French seemed to breathe a collective sigh of relief on Friday when police killed all three armed jihadists, believing that the turmoil was finally over.

The sense that a larger-scale threat is in the works, perhaps elsewhere in Europe, echoes a warning from British intelligence. Last Thursday — one day after Saïd and Chérif Kouachi stormed the Charlie Hebdo newspaper office and killed 12 people — the head of Britain’s MI5 security agency, Andrew Parker, told defense and intelligence experts in London that British intelligence officers believed that terrorist groups were crafting “complex and ambitious plots” against Western targets, and said “a group of core al-Qaeda terrorists in Syria is planning mass-casualty attacks against the West.”

On Friday, police killed the Kouachi brothers in a printing workshop outside Paris while at the same time others killed Amedy Coulibaly, who took control of a kosher supermarket at the Porte de Vincennes and killed four hostages, one day after he shot dead a policewoman.

Despite the huge shock from last week’s attacks, in the eyes of intelligence officials, it was not a particularly major assault. In total, the three jihadists killed 17 people, including eight journalists and three police officers, before they were shot dead. While those numbers are a tragic loss, they are still far smaller than, for example, an attack on a crowded bus or train might be. On July 7, 2005, four suicide bombers killed 52 people in London while the Madrid train bombing in 2004 left 191 dead. Speaking of last week’s attacks, Trotignon said that leaving aside the enormous turmoil, it could be far worse. “Of course it was a drama with a lot of dead people on the ground,” he said, then apologized for perhaps sounding callous. Still, he said, “these are not the worst possible terrorists in Europe.”

Although all three men are dead, French Interior Minister Bernard Cazeneuve opted to maintain the top-level security threat level in place across the country, saying that France was “under threat.” Yet averting the next terror attack could be a daunting task, Trotignon said. “It is impossible in all of Europe, not only in France but also Germany and everywhere, to monitor every guy coming from Syria or Iraq,” he said. “We know in the intelligence community that it is impossible.”

On Monday the government announced it was deploying 10,000 troops to protect hundreds of Jewish schools and synagogues across the country — the first time France has ever used military personnel to protect civilians, according to Army Colonel Benoît Brulen, speaking to a reporter in Paris’s 11th District, close to the site of the Charlie Hebdo massacre. “It is an indication of the level of menace we face,” he said. 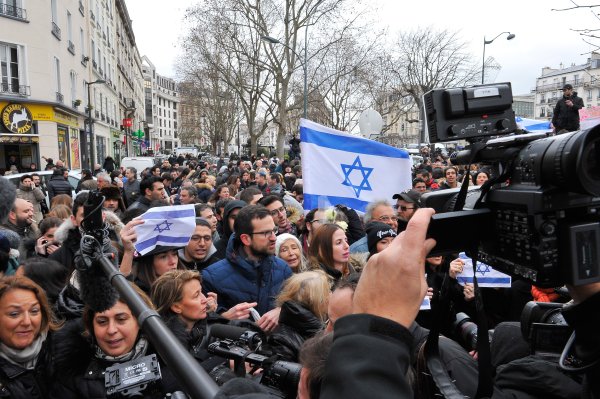 Jewish Victims' Bodies From Paris Attack Arrive in Israel
Next Up: Editor's Pick