Cities Parched by Drought Look to Tap the Ocean

After three years of drought, California’s reservoirs are filled with more mud than water. Many farmers can’t irrigate their fields and have no choice but to leave them fallow.

As insurance against future droughts, San Diego is turning to a vast and largely untapped body of water for help: the Pacific Ocean. A huge desalination plant is under construction just outside the city that is expected to provide 7% of the arid region’s water needs.

“Desalination isn’t dependent on rainfall or snowpack,” says Peter MacLaggan, a senior vice president with Poseidon Resources, the company that is developing the plant in Carlsbad, Calif. “Traditional sources have been cheap and plentiful, and that’s not necessarily the case anymore.”

Desalinization is an old technology used widely in the Middle East that is getting new attention in the United States because of innovation and lower costs. With growing populations and increasingly scarce water, more than 15 California coastal cities are considering the ocean as an alternative to fickle Mother Nature.

But desalination is still far more expensive than damming rivers and pumping ground water. Furthermore, critics worry about the environmental consequences and argue that water conservation is a much cheaper option.

When complete, the $1 billion Carlsbad desalination plant will be the largest in the Western Hemisphere, providing up to 50 million gallons of water daily to San Diego County and its more than 3 million residents. Seawater sucked up from an offshore pipe will be blasted through a series of membranes that have microscopic holes to help filter out the salt, sand and algae.

Construction, delayed for years by lawsuits, is expected to be completed by late 2015 or early 2016. Ultimately, the water produced by the plant will be “bottled water quality,” MacLaggan says.

Over the years, desalination plants have had a mixed track record. A number of cities that tapped seawater during droughts later closed the plants after the rains returned, because of the high costs.

Just up the coast, Santa Barbara, Calif. built a $34 million desalination plant in early 1990s amid a water shortage, but then closed it a few years later. With the latest drought, city officials are considering paying millions of dollars more for refurbishments so they can restart the plant.

Meanwhile, several Australian cities spent billions of dollars over the past decade for seawater treatment plants. However, many of them were put on idle to save money after the droughts ended.

“We end up spending a lot of money and getting very little water,” says Conner Everts, executive director of the Southern California Watershed Alliance, who opposes desalination plants because of their cost and their potential impact on the environment. “Don’t think of the ocean as an endless reservoir, but a fragile ecosystem.”

In particular, Everts complains about desalination plants discharging briny waste into the sea that he says could kill marine life. San Diego’s plant, for example, will suck up two gallons of seawater for every gallon of potable water it produces. The excess, which is 20% more salty that typical seawater after being diluted, will be pumped back out into the surf. The plant’s operators insist the discharge will be safe for sea life.

Opponents filed more than a dozen lawsuits to block the plant’s construction based on environmental and other concerns. But the plant’s supporters ultimately prevailed in court.

San Diego officials pushed for the desalination plant following a serious drought across much of the West. With few rivers and an average of only 10 inches of rain annually, the San Diego region is particular vulnerable to water shortages.

Officials agreed to a 30-year deal to buy desalinated water from the plant’s developers for $2,014 to $2,257 per acre foot, about the equivalent of what a family of five uses in a year. The cost is nearly double traditional sources. County residents will ending up paying an extra $4 to $7 in their monthly water bills, on average.

Over time, improvements in technology are supposed to drive down costs of desalination. Pumps, membranes used in the plants are becoming increasingly efficient and durable, for example. Whether the costs will ever fall in line with traditional water sources is a subject of much debate. For his part, MacLaggan predicted that the costs will reach parity by 2025.

But Everts says water conservation and recycling waste water are much cheaper alternatives that should get a lot more attention. Encouraging home owners to rip out their water-guzzling lawns and install more efficient toilets are just some of the options.

“Desalination is a sexy technology that sounds like a great idea,” Everts says. “But it distracts us from putting resources to other things that could help us right now.”

In any case, Mother Nature may be coming to the rescue. California’s rainy season has got off to a good start with a series of strong storms. But the Sierra Nevada snowpack, the most important barometer, is still low. Moreover, a few wet months alone can’t offset years of drought.

MacLaggan, with the Carlsbad plant’s developer, agrees that more conservation is necessary along with other strategies like treating wastewater so that it is clean enough to drink. “We need to do all these things,” he says, adding that desalination should be part of the solution because conservation won’t be enough to offset the growing population and the region’s lack of rain. “This is a drought-proof supply.” 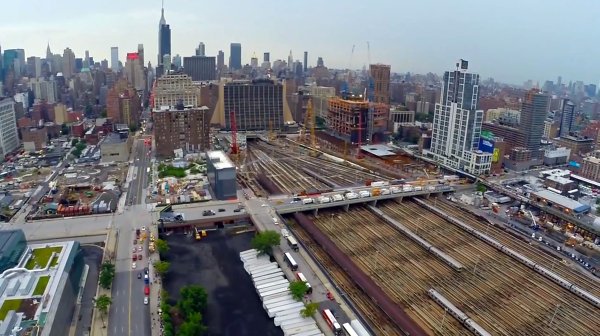