What Haiti Needs to Do Next

A girl walks along a path on her way to school in the upper watershed of Les Anglais. Until recently, there had been no maps showing where the schools are located, how many students attended, or any other critical information for improving schools facilities.
Photo Credit- Alex Fischer, Earth Institute
Ideas
By Alex Fischer and Marc A. Levy
Alex Fischer is the Associate Director of the Haiti Research and Policy Program at the Earth Institute, Columbia University and author of multiple studies on watershed management and sustainable development in Haiti. He leads efforts to integrate rapidly evolving technologies into national-scale monitoring platforms and data-driven decision-making in fragile states. Marc A. Levy is a political scientist serving as Deputy Director of the Center for International Earth Science Information Network, a unit of Columbia University's Earth Institute. He has published widely on sustainability challenges in fragile states and global environmental and development indicators. Both Levy and Fischer have been supporting initiatives in Haiti since 2008 and were in Port-au-Prince during the 2010 Earthquake.

Within three months of the 2010 earthquake in Haiti, the initial shock and sadness of the tragedy had been replaced by an enormous ambition: Haiti would build back better. Sadly, on the occasion of the fifth anniversary of the earthquake, the political crisis embroiling the country threatens what progress has been made.

Yet there have been remarkable innovations and some progress. These need to be kept alive so that once the current political crisis passes, development can resume. Among the most encouraging innovations to follow the Haiti disaster has been the ability to map, assess, and monitor investment and progress in an open data framework. This must continue.

In 2010 shortly after the Earthquake, we argued that the earthquake recovery aid was failing to adequately support Haiti’s ambitions. We warned that long-term, national-scale planning, financing, and monitoring was required to overcome the instability undermining Haiti’s growth—and that there was a conspicuous absence of critical data.

By 2012, these concerns started being addressed with improvements in the coordination between civil society, donors, government, and diaspora. The Government approved and released the national-scale development plan (Plan Stratégique de Développement d’Haïti, PSDH), with the explicit goal of becoming an emerging economy by 2030.

The PSDH is an emerging model of development planning for a fragile country. It serves as a basis for aid coordination and regional and local community development. Organized around local, regional, and national growth poles across Haiti, the PSDH programs support four development pillars: social services, territorial (and land-use) management, economic development, and institutional reform. The plan identifies 32 programs containing more than 3,000 projects. It has guided the government’s investment budgets for the past two years.

As initially conceived, the plan has several flaws, and one in particular stands out: the absence of baseline data required to systematically design, implement, and monitor development programs. Within the plan document, it self-identifies 77 facility and infrastructure types requiring data collection at a national level, specifically requesting geo-spatial coordinates and quantity and quality attributes required for planning and managing the nation’s assets in infrastructure and public facilities.

The Prime Minister’s E-Governance Unit, with our support, responded to the PSDH calls by designing the necessary tools to undertake a National Infrastructure and Facility Inventory (NIFI). The initial 20 different types of infrastructure and facilities to be inventoried ranged from public waste management and schools to tourism facilities and irrigation systems.

The NIFI platform offers the Haitian government the opportunity to reap the benefits of the data revolution by integrating the acquired data into its investment planning, decision-making, and management systems. For example, NIFI can provide a complete geo-registry of the nation’s public and private primary and secondary school system, paired with existing records on school facilities quality and enrollment. This would greatly advance the optimization of the location of planned new school construction, as well as management of supplies and teacher allocation.

It is clear that the government and its partners can produce a data-driven, cost-optimized development plan. The government had launched an initial platform that tracks all public investment. In August 2013, the Government published an interactive map of all the identified national government offices, helping citizens and development partners locate and coordinate with their regional and local public service office.

It’s analogous to ordering a pizza from Domino’s, where you can track its preparation on line, with specific alerts at a number of stages. Haiti is taking the very logical step in applying this same transparency to government projects, so that citizens can track them from the design phase through to implementation. As a result, the development process not not only builds new schools, clinics and houses, but even more crucially builds trust.

Despite the current turmoil in the shadow of the anniversary of the earthquake that destroyed large parts of Haiti’s core infrastructure and facilities, NIFI remains an opportunity to further modernize and optimize the interactions and investments of the Haitian public and private sectors. For the Haitian diaspora, NIFI could be used to more efficiently target their charitable support to hometown associations and their development investments.

We strongly recommend maintaining the momentum towards the acquisition of national baseline data. The Government of Haiti can move its development agenda forward by providing these crucial underpinnings for the post-2015 global development agenda and as a platform for coordinated public/private sector investment.

This is one area where Haiti should be proud to be a global leader on the verge of capturing the benefits of the data revolution.

Alex Fischer is the Associate Director of the Haiti Research and Policy Program at the Earth Institute, Columbia University and author of multiple studies on watershed management and sustainable development in Haiti. He leads efforts to integrate rapidly evolving technologies into national-scale monitoring platforms and data-driven decision-making in fragile states. Marc A. Levy is a political scientist serving as Deputy Director of the Center for International Earth Science Information Network, a unit of Columbia University’s Earth Institute. He has published widely on sustainability challenges in fragile states and global environmental and development indicators. Both Levy and Fischer have been supporting initiatives in Haiti since 2008 and were in Port-au-Prince during the 2010 Earthquake. 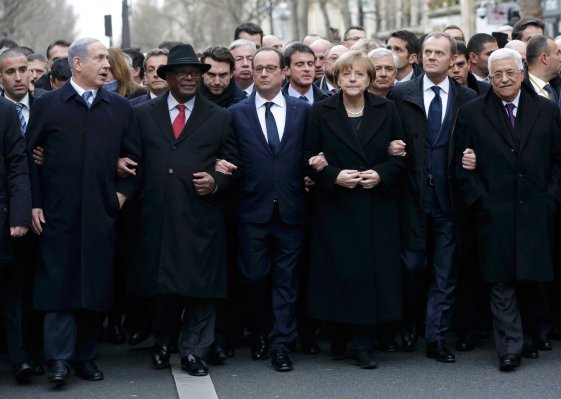 Obama Should Have Gone to Paris
Next Up: Editor's Pick