Review: From Cosby to Charlie, This Golden Globes Had Something to Say

Accepting the Golden Globe for best actor in a TV drama, Kevin Spacey shared a story about meeting Stanley Kramer late in the legendary director’s life. “I just wish my films could have been better,” Kramer said.

It was a fitting anecdote Sunday. Kramer was known for “message movies”–films like Guess Who’s Coming to Dinner, On the Beach and Judgment at Nuremberg, which made pointed, hard-to-miss, unabashedly liberal comments on bigotry, war and other big issues. And Sunday’s broadcast was in many ways the message Golden Globes. This year, Hollywood had more to get off its chest than the fabric from its plunging necklines. (About which, Globes viewers were witness to more exposed sternums Sunday night than thoracic surgeons see in their careers.)

It started with Tina Fey and Amy Poehler, hosting what they’d announced in advance was their last Globes, and they clearly meant to leave their audience talking. Their routine–the now-familiar, seemingly effortless ping-ponging between them–began with the usual skewering of the latest movies mixed with on-point pokes at the industry’s shallowness and sexism. Patricia Arquette’s role in Boyhood, Poehler said, was proof that “there are great roles for women over 40, as long as you get hired when you’re under 40.”

But at the end, the two former SNL-mates whittled their comedy down to a spearpoint, targeting–as they suggested they would–Bill Cosby, and the rape accusations that recently resurfaced against him. The fairytale movie Into the Woods, Poehler said, included Sleeping Beauty, who “just thought she was getting coffee with Bill Cosby.” Fey launched into a Cosby imitation that she’d brought out years ago on Weekend Update in connection withe the charges: “I put the pills in the people!” she said, in her best Pudding Pop expostulation.

A few awards later, they brought on some help to hit another recent Hollywood hot button, the North Korean attacks on the film The Interview, and the industry’s response or lack thereof. (Earlier, Fey said the awards would celebrate the best TV, “as well as all the movies that North Korea was OK with.”) Comedian Margaret Cho played a North Korean general and movie critic (for Movies Wow! magazine) who cast a glowering eye on the festivities. (Besides The Interview, she disapproved Orange Is the New Black competing in the comedy category: “It’s funny, but not ‘ha-ha’ funny!”)

The statements in the acceptances themselves were, not surprisingly, more earnest. Common, accepting the best-song award for Selma, expressed solidarity both with unarmed black kids shot by police and with the two New York City policemen who were recently assassinated. Joanne Froggatt, a winner after a season of Downton Abbey in which her character was raped, dedicated the award to real-life rape survivors. And the winsome Gina Rodriguez of The CW’s Jane the Virgin accepted a best comedy actress award, tearfully citing the show’s importance to Latino viewers, “a culture that wants to see themselves as heroes.”

That last award was also an example of the Golden Globes’ continued streak of honoring new shows and new faces in its TV awards (in this respect, it’s almost the anti-Emmys). The Golden Globes, voted on by a relative handful of journalists, don’t mean a lot in terms of predicting other awards or turning shows into hits. But one thing the awards can do is give mass-audience publicity to off-the-radar shows.

And the Globes did that last night for 2014’s best show, Transparent on Amazon, which won best comedy and best actor for Jeffrey Tambor. (It was a big night for streaming TV and anything that wasn’t traditional broadcast: only The CW and PBS won from the latter category.) Tambor, who plays transgender parent Maura Pfefferman, continued the earnest theme by thanking the transgender community; creator Jill Soloway dedicated the show’s award in part to Leelah Alcorn, a transgender teenager who became a social media icon after her suicide.

The Globes’ openness to the new continued to a fault in the drama category, won by Showtime’s The Affair–an ambitious, challenging, well-acted he-said-she-said drama that was also often a morose, overengineered mess in its first season.

But again: it’s the Globes! No need to get too worked up. Indeed, the very appeal of the Globes traditionally is their lack of seriousness or import–they’re generally a loose, boozy good time packed with stars. But a heavy year in the news gave us a heavier Globes, and it seemed fitting that this year’s Cecil B. DeMille lifetime achievement award went to Hollywood’s speaker-outer-in-chief, George Clooney. Late last year, it was Clooney who chided the industry for the lack of vocal support for the victims of the Sony hacking. And Sunday night, Clooney ended his speech on a note of solidarity with the French cartoonists massacred by Islamist extremists in Paris: “Je suis Charlie.”

Vraiment? Yes, Clooney and his wife Amal wore their support for artists’ expression literally, wearing badges with the slogan on the red carpet, where other attendees were brandishing pens in solidarity. But when it came to the Globes’ own satire, reaction was decidedly mixed. Reaction shots showed much of the crowd uncomfortable at Fey and Poehler’s Cosby jokes, and there’s already been social-media reaction against those, as well as attacking Cho’s sendup as a racist caricature.

Anyone surprised? For all the horror at the shootings and support for the right to expression, Americans get nervous about satire long before it reaches the scathing, vicious tone of Charlie Hebdo‘s cartoons. We’ve had numerous debates over whether a rape joke can ever be good and funny (though I’d say Fey and Poehler’s, aimed at a powerful person accused of assault, are Exhibit A of how one can be). And though Cho herself is Korean, playing a foreign character–and though she already played dictator Kim Jong Il on Fey’s 30 Rock–any lampooning of a heavily accented Asian character on this stage was likely to trip the outrage meter.

As with the Charlie Hebdo cartoons themselves, it was an example of a tension in American melting-pot culture, especially in left-leaning communities like Hollywood: classical liberalism (which emphasizes expression and personal and artistic liberties) bumps up against progressivism (which emphasizes identity politics and power dynamics). And one sad week in the news isn’t likely to change that.

So, nous sommes tous Charlie? Maybe. But more in theory than in practice.

Read next: Golden Globes Recap: At This Show, Politics Only Go So Far 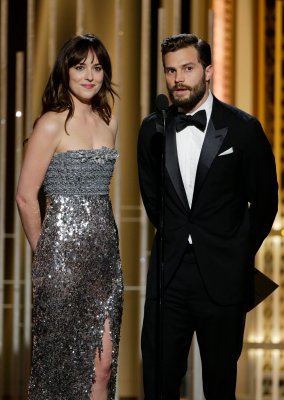 Watch the Hot New Fifty Shades of Grey Trailer
Next Up: Editor's Pick