The Golden Globes has a reputation for honoring fresh talent and making unexpected moves, and in that regard, Sunday’s ceremony did not disappoint. Sure, as expected, Boyhood took home best drama and Jeffrey Tambor won best TV actor for the heavily acclaimed Transparent. Yet there were plenty of jaw-dropping moments too as several dark horses surged forward to cross the finish line:

5. Fargo beats True Detective — and Billy Bob Thornton beats Matthew McConaughey. The two acclaimed freshman crime anthology dramas finally squared off in a major race (for the Emmys they competed in different categories). Both shows are terrific; you can make an argument for either one winning this category. Yet True Detective has enjoyed more buzz and Thornton topping McConaughey was definitely a shock given the latter’s mesmerizing performance that was such a large part of True Detective‘s success.

4. How to Train Your Dragon 2 wins best animated movie. Most assumed The LEGO Movie and Big Hero 6 were duking it out, yet Dragon swooped in for the kill—and they didn’t even begrudge the movie for having a “2” on it.

3. Gina Rodriguez wins best actress in a TV comedy: Her nomination was already a surprise. Rodriguez made headlines when she made it into this category as relative unknown actress on the never-before-nominated The CW network. But that Rodriguez beat out Lena Dunham and Edie Falco and Julia Louis-Dreyfus and Taylor Schilling was the sort of uplifting Cinderella moment that makes awards shows so fun to watch. “My father used to tell me to say every morning, ‘Today is going to be a great day. I can and I will,’” she said. “Well, Dad, today is a great day. I can and I did.”

2. The Affair wins best TV drama and Ruth Wilson wins best TV actress in a drama. In retrospect, The Affair taking the drama category should have been more obvious. Showtime’s sexy acclaimed drama might not have the highest profile, but it’s exactly the sort of boundary-pushing freshman series the HFPA loves. For Wilson, competition was really steep, with the actress edging out Claire Danes, Viola Davis, Julianna Margulies and Robin Wright. “I am very amazed,” Wilson said.

Read next: Golden Globes 2015: See All the Winners 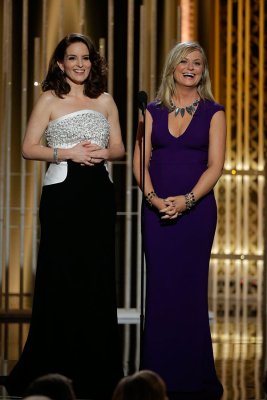 See All the Winners of the 2015 Golden Globes
Next Up: Editor's Pick