The Golden Globes hosts promised that they wouldn’t hold back on the Bill Cosby jokes — and on Sunday night, Amy Poehler and Tina Fey delivered.

“In Into the Woods, Cinderella runs from her prince, Rapunzel is thrown from a tower for her prince, and Sleeping Beauty just thought she was getting coffee with Bill Cosby,” Poehler cracked.

“I don’t know if you saw this on the news today, but Bill Cosby has finally spoken out about the allegations against him,” Fey added. “Cosby admitted to a reporter [doing a Cosby impression] ‘I put the pills in the people! The people didn’t want the pills in them!’”

“That’s not right,” Poehler said. “It’s more like [Cosby impression]: ‘I got the pills in the bathroom and I put them in the people!’”

This isn’t the first time the two have joked about allegations of sexual assault against Cosby. Back in 2005, Fey and Poehler took jabs at Cosby on Saturday Night Live as anchors of the Weekend Update segment. 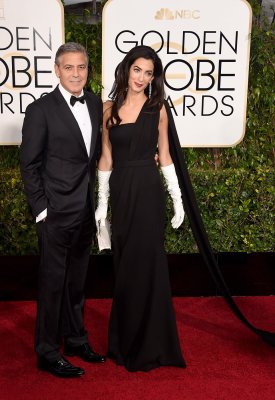 Watch Tina Fey Call Out George Clooney for His Lack of Lifetime Achievements at the Golden Globes
Next Up: Editor's Pick