Heads of state from across Europe, Africa and the Middle East flew into Paris on Sunday to take to the streets alongside an estimated 1 million people in the city — including the entire French government. It was the largest demonstration in the country’s history, showing defiance and unity in the wake of a week marked by tumultuous violence and deep emotion in France.

With an estimated 1 million people on the streets, French police posted sharpshooters on the roofs of the buildings starting Sunday morning, along the 2.5-mile route of the march. Helicopters buzzed over central Paris as the city awoke to what would be yet another day for the history books.

Before the march began, the atmosphere was peaceful and friendly. Hundreds of parents brought small children, carrying them on their shoulders through the jam-packed streets.

Many wore “Je Suis Charlie” attire, or draped themselves in French flags. There were hundreds of hand-drawn signs too, reading “Je Suis Juif,” or “I Am Jewish,” not necessarily from Jews, but rather a mark of solidarity for those killed in the kosher-supermarket siege on Friday.

The police presence was heavy. People chanted, “Liberté, egalité, fraternité” (Freedom, equality, brotherhood), “Nous Sommes Tous Charlie” (We Are All Charlie) and “On N’a Pas Peur” (We Are Not afraid). “Merci à la Police” got more applause than anything else.

The march kicked off at 3 p.m., Paris time, and began along its route from the city’s Place de la République, a wide-open plaza that dominates the congested neighborhoods of eastern Paris, to the Place de la Nation farther east.

World leaders brushed off the risks to their own safety and seemed determined to be in Paris, first as a show of solidarity with those killed, and also as a statement that they are — at least right now — united against terrorism. The three days of chaotic violence resulted in the deaths of 20 people, including three terrorists, who died in a blaze of police gunfire on Friday evening. “The reaction of people, and now the reaction of the whole world, is unprecedented,” French Foreign Minister Laurent Fabius said on Europe 1 radio on Sunday morning. “This afternoon, Paris will be the world capital in the fight against terrorism.”

As a measure of how much this week’s killings have moved the world, the attacks, and Sunday’s march, brought together those who are bitterly divided back at home, but who for just a few chilly hours on a January Sunday in Paris stood and walked together.

For Parisians, the weekend has brought a sense of both exhaustion and relief.

This week’s terrifying tumult — Wednesday’s massacre at the satirical Charlie Hebdo paper, Thursday’s shooting of police officers, and two violent hostage sieges on Friday — has left the country reeling and with much to contemplate: about the security of Paris, the country and Europe.

In a food market on Paris’ Left Bank on Sunday morning, the talk among vendors and shoppers focused almost solely on what everyone had experienced during the week. “Are you going to the march?” asked one woman to another. “Of course!” she replied. “Everyone is going.”

From early Sunday, hundreds of Parisians of all colors began pouring into Place de la République, which has been the focus of public mourning since Wednesday’s massacre, during which two brothers killed eight journalists, just a short walk away. The plaza has filled up with makeshift shrines of piles of flowers and candles; thousands of pens and pencils have been laid around the square’s huge fountain, in a symbolic tribute to the journalists killed in the attack. Eva Rosado, an 18-year-old studying in the northern city of Lille, said she had taken the train alone to Paris on Sunday, feeling she had to be at the march. “I haven’t been able to work at all this week,” she said. “I’ve woken up early every morning, wondering what is going to happen.”

Only 5 years old on 9/11, Rosado said that “this is the first attack I can really remember, and it has really affected me, the idea that people can come into central Paris with Kalashnikovs and kill people, it’s something I could never have imagined. But today at the march I feel safe, the security and police is very present.”

Laila Koumrane, an actress who moved to Paris from Morocco 15 years ago, brought her two children, ages 9 and 2, to the march. “We have a duty to show our children that we are not afraid. As Muslims, we have to condemn these acts of terrorism. I am proud to be here,” she said.

Leaving aside the raw emotions, there are urgent questions at stake. And well before the march began, leaders and officials gathering in Paris met to discuss issues that now are critically urgent. Chief among them: how to stop the wave of young Europeans who have joined jihadist groups fighting in Syria and Iraq from returning to mount terrorist attacks on home soil; how French intelligence failed to avert Wednesday’s attack; and how military-grade Kalashnikov rifles made their way into central Paris.

One of the Charlie Hebdo attackers, Saïd Kouachi, was well known to intelligence officers as having trained in Yemen with al-Qaeda’s franchise there; his brother Chérif had served time in jail for jihadist activities; and Amedy Coulibaly, who fatally shot a policewoman on Thursday and four hostages in a kosher supermarket on Friday, claimed his allegiance to the extremist group the Islamic State of Iraq and Greater Syria, and has a girlfriend who is believed to have traveled to Syria last week to join the jihad.

The possibility of ISIS involvement in Paris’ attacks increased on Sunday, when a video emerged online showing Coulibaly with a Kalashnikov rifle under an ISIS flag, claiming that he had coordinated his attack this week with the Kouachi brothers.

Nonetheless, U.S. Attorney General Holder said Sunday that investigators do not yet have reliable information on which terrorist groups were responsible for the attacks.

Henry Querel, 55, who works for the Paris city council, said during Sunday’s march that the country should “ban people from going abroad to fight. But we cannot ban those that are already there from coming home if they are French citizens. We have to understand it’s brainwashing, they are not in their right mind.”

On Sunday morning top law-enforcement officials, including Holder, holed up at the French Interior Ministry in central Paris to discuss what to do. And despite the fact that all three of this week’s attackers are now dead, Interior Minister Bernard Cazeneuve on Friday opted to keep in place a red-alert security-threat level nationwide, fearing that the week’s violence might not be over. “We are under threat,” he told reporters.

— With reporting by Naina Bajekal and Jay Newton-Small / Paris

Correction: The original version of this story incorrectly described a sign held at the massive unity march in Paris. The sign, which said “Charlie Hebdo, Irresponsible Newspaper. Oil and Fire,” was quoting from a Charlie Hebdo cartoon, not criticizing the publication. 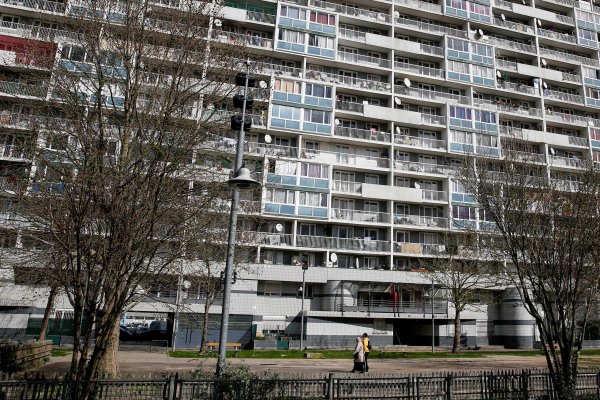 Muslims in Paris Fear Drift Toward Radicalism
Next Up: Editor's Pick