Mitt Romney speaks during a campaign stop at Lansing Community College on May 8, 2012 in Lansing, Mi.
Bill Pugliano—Getty Images
By Zeke J Miller and Alex Altman

Is Mitt Romney for real?

Members of Romney’s inner circle remain skeptical that the two-time Republican presidential contender will make a third bid for the White House, even after he told top Republican donors Friday that he was weighing another try for the Oval Office in 2016.

“Tell your friends,” Romney told about 30 Republican donors at a closed-door New York City gathering organized by New York Jets owner Woody Johnson, according to a person familiar with Romney’s remarks. The meeting, first reported by the Wall Street Journal, came after nearly a year of hints dropped by Romney’s donors and allies, who have been practically begging the former Massachusetts governor to launch another run for the White House.

But top advisers to Romney still discount the chance of him mounting a campaign. For starters, he has done little to convince even close allies that he is serious about it.

Other major candidates have begun hiring staff, courting activists and taking other concrete steps toward assembling a campaign. Romney has not.

“Say what you want about the 2012 campaign, but it was a professional operation. This feels like it’s being winged,” says a senior Republican strategist who has worked closely with Romney on the timing of the leak. “They’re winging it right now.”

After two failed bids for the White House, it is far from clear that Romney, never a favorite of conservatives, even has a feasible path to the GOP nomination in a more competitive field.

And many close allies don’t believe he’d perform much better in a general election should he get lucky again.

The former Massachusetts governor proved to be a deeply flawed candidate in 2012. Wooden on the stump, he was unable to deflect attacks about the vast wealth he amassed during his business career. Romney alienated Hispanics, performed poorly with women and turned off vast swaths of the electorate with his disparaging remarks about the 47% of Americans who expected handouts. Many Republicans also believe nominating Romney would eliminate the opportunity to draw favorable contrasts with Democratic frontrunner Hillary Clinton’s wealth and age.

Romney himself has dismissed the prospect of another campaign as a lost cause. In Mitt, a behind-the-scenes documentary, he says so plainly. “I have looked, by the way, at what happens to anybody in this country who loses as the nominee of their party,” Romney tells his family in the film. “They become a loser for life, all right? That’s it. It’s over.”

So why would Romney donors say he’s considering a campaign that he has taken no steps toward preparing for, and which by his own calculation has little chance at succeeding?

The primary motivation for Romney’s supposed change of heart, one close aide says, was the support of his donors. “He’s more open to it,” says one close adviser, “based on all the encouragement he’s received.”

During his 2012 campaign, Romney forged close relationships with a national network of financiers, who helped him raise more than $1 billion. As a former venture capitalist and private-equity executive, Romney is well practiced in the care and feeding of top donors, who were treated to parties on primary nights and invited to summits at a five-star Park City ski lodge.

Since his defeat, Romney has worked to maintain these relationships, hosting similar retreats in Park City in 2013 and 2014, with another already on the books for June. He staged events to introduce Republicans candidates to his donor network, elevating the former nominee to the role of party power broker. Last year he hit the fundraising circuit for down-ballot Republicans.

Former Romney advisers say that nearly all of the leaks that Romney is mulling a 2016 campaign come from this donor network, not the political aides he would rely on to execute one.

Now many of those same money men are being aggressively courted by one of the only other Republican powerful enough to loosen Romney’s grip on the party’s purse strings. Jeb Bush’s December announcement that he will “actively explore” a 2016 run has upended an already crowded GOP primary field, including the chase for the small circle of wealthy Republicans whose deep pockets and broad networks can lift a candidate to the nomination. The former Florida governor, quickly set to courting Romney’s donors, holding fundraising events this week in New York, Boston and Greenwich, Conn. Romney’s entrance into the field would set up a clash between two center-right politicos competing for a finite number of elite donors and staff.

At the same time, Bush began recruiting Romney’s political team. This week he announced the formation of a political action committee to help Republicans around the country, as well as a super PAC, formed by former Romney super PAC co-founder Charles Spies, to boost his own political fortunes.

Bush and Romney are not close. Romney aides noted Friday that Bush waited until well after the Florida primary to endorse the nominee in 2012, and his recent criticism of Romney’s performance during the race rankled loyalists. “The message here to Jeb is ‘slow your roll,'” says one senior Romney veteran. “There are donors who are very protective of Mitt and don’t like to see him treated this way.”

One Republican consultant suggests that posturing over a possible campaign was a way to signal that he wouldn’t cede automatically donors or staff to Bush. “Money for some is more important than policy,” says the consultant.

This is why veteran operatives of the Romney campaigns consider the revived rumors of a 2016 campaign overblown. They have long scoffed at the notion he’d run again. They believe their former boss would be an excellent president. They say Romney agrees. At the same time, they don’t expect a campaign to materialize.

“You take that deeply held belief and a bunch of people telling him to do it,” a Romney adviser says, “and you have this tizzy.” 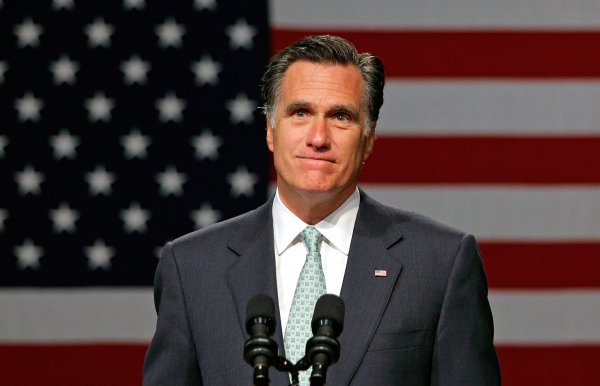