Kareem Abdul-Jabbar: These Terrorist Attacks Are Not About Religion

A tribute of flowers and candles in the shape of a heart is set up at Place de la Republique in Paris in memory of the victims of the Charlie Hebdo terrorist attack, on Jan. 7, 2015 in Paris.
David Chour—Demotix/Corbis
Ideas
By Kareem Abdul-Jabbar
Abdul-Jabbar is a six-time NBA champion and league Most Valuable Player. He is the author of the new book, Writings on the Wall.

Another horrendous act of terrorism has taken place and people like myself who are on media speed-dial under “Celebrity Muslims” are thrust in the spotlight to angrily condemn, disavow, and explain—again—how these barbaric acts are in no way related to Islam.

For me, religion—no matter which one—is ultimately about people wanting to live humble, moral lives that create a harmonious community and promote tolerance and friendship with those outside the religious community. Any religious rules should be in service of this goal. The Islam I learned and practice does just that.

Violence committed in the name of religion is never about religion—it’s ultimately about money. The 1976 movie, All the President’s Men, got it right when it reduced the Daedalus maze of the Watergate scandal to the simple phrase, “Follow the money.” Forget the goons who actually carry out these deadly acts, they are nothing more than automated drones remote-controlled by others. Instead of radio signals, their pilots use selective dogma to manipulate their actions. They pervert the Qur’an through omission and false interpretation.

How is it about money? When one looks at the goal of these terrorist attacks, it’s clearly not about scaring us into changing our behavior. The Twin Tower attacks of 9/11 didn’t frighten America into embracing Islam. The fatwa against Salman Rushdie didn’t prevent the publication of The Satanic Verses. Like all terrorist attacks on the West, they just strengthen our defiant resolve. So the attack in Paris, as with most others, isn’t about changing Western behavior, it’s about swaggering into a room, flexing a muscle, and hoping to elicit some admiring sighs. In this case, the sighs are more recruits and more donations to keep their organization alive. They have to keep proving they are more relevant than their competing terrorist groups. It’s just business.

Nor should we blame America’s foreign policy as the spark that lights the fuse. Poverty, political oppression, systemic corruption, lack of education, lack of critical thinking, and general hopelessness in these countries is the spark. Yes, we’ve made mistakes that will be used to justify recruiting new drones. But we shouldn’t kid ourselves that the recent report detailing our extensive and apparently ineffective use of torture caused any kind of mass terrorist volunteers. The world knew we tortured. The only thing the report revealed was how bad we were at it. More important, if recruits were swayed by logical idealism, they would realize that the fact that we conducted, released, and debated such a report is what makes America admirable. We don’t always do the right thing, but we strive to. We admit our faults and make adjustments. It may be glacial, but it’s movement forward.

Knowing that these terrorist attacks are not about religion, we have to reach a point where we stop bringing Islam into these discussions. I know we aren’t there yet because much of the Western population doesn’t understand the Islamic religion. All they see are brutal beheadings, kidnappings of young girls, bloody massacres of children at schools, and these random shootings. Naturally, they are frightened when they hear the word Muslim or see someone in traditional Muslim clothing. Despite any charitable impulses, they also have to be thinking, “Better safe than sorry”—as they hurry in the opposite direction.

When the Ku Klux Klan burn a cross in a black family’s yard, prominent Christians aren’t required to explain how these aren’t really Christian acts. Most people already realize that the KKK doesn’t represent Christian teachings. That’s what I and other Muslims long for—the day when these terrorists praising the Prophet Muhammad or Allah’s name as they debase their actual teachings are instantly recognized as thugs disguising themselves as Muslims. It’s like bank robbers wearing masks of presidents; we don’t really think Jimmy Carter and George W. Bush hit the Bank of America during their down time.

We can’t end terrorism any more than we can end crime in general. Ironically, terrorism is actually an act against the very religion they claim to believe in. It’s an acknowledgement that the religion and its teachings aren’t enough to convince people to follow it. Any religion that requires coercion is not about the community, but about the leaders wanting power.

I look forward to the day when an act of terrorism by self-proclaimed Muslims will be universally dismissed as nothing more than a criminal attack of a thuggish political organization wearing an ill-fitting Muslim mask. To get to that point, we will need to teach our communities what the real beliefs of Islam are. In the meantime, keep my name on speed-dial so we can get through this together. 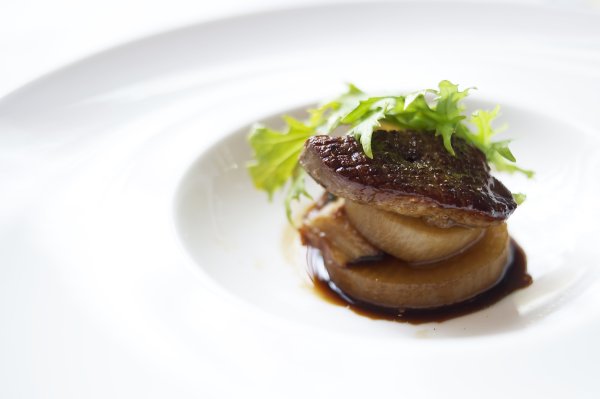 Foie Gras Freedom Is Also a Win for Free Speech
Next Up: Editor's Pick