Missed last season of Girls but plan to tune into Sunday’s season four premiere? Here’s what you need to know about what’s been going on with Hannah, Marnie, Shoshanna and Jessa. Plus, a look at what Lena Dunham is planning for the upcoming season.

Now divorced, the arguably craziest character was M.I.A. for a good deal of last season after Hannah and Shoshanna picked her up from rehab. After visiting Marnie at her job, Jessa meets a photographer, Bee Dee, who decides to take her on as an assistant. During the final episode, she agrees to help her elderly boss kill herself because she doesn’t want to keep getting old. But at the last minute Bee Dee decides she doesn’t want to die after all and demands Jessa call 911.

Shoshanna had a rough year. After experimenting with booze and boys, she finds out she won’t be graduating from NYU on time because she failed one class. During the opening night of Adam’s play, Shoshanna realized she may have made a mistake breaking up with Ray. She begs him to take her back during intermission, but he rejects her.

A recently dumped Marnie made some terrible romantic decisions during the last year. First, she slept with Ray, Shoshanna’s ex, something Shoshanna discovered at the end of last season, compelling her to tackle Marnie to a bed angrily. While hooking up with Ray, Marnie also pursued Desi, another actor in Adam’s play who helps Marnie develop her confidence in singing and who also happens to have a girlfriend. Marnie and Desi do seem to make something of a connection: Her singing becomes much better with his help, and though she’s acting as an old friend’s assistant at a gallery, a music career now seems possible. Marnie’s efforts to seduce Desi culminate in her making out with him before the curtain raises on opening night of the play. Marnie is elated until Desi’s girlfriend, Clementine, confronts her in the bathroom and calls her pathetic. Marnie then proceeds to creepily watch Desi and Clementine fight outside a bar. The girl has gone full stalker.

As for Hannah, she was accepted to the Iowa Writer’s Workshop, giving her a much-needed professional boost after she loses her book deal following the suicide of her editor. Hannah struggled with Adam’s sudden success in acting throughout the season and was surely pleased she was finally making artistic progress too. She delivers the news to Adam before he takes the stage. After the play, Adam accuses Hannah of sabotaging his show with her Iowa news and abandoning him by moving to the Midwest. The two fight and part ways.

In short, the girls still have a lot of problems. This clip from the episode when they take a trip to the beach best summarizes all of their issues:

Based on the trailer for the upcoming season, we know Hannah does in fact go to Iowa and she and Adam at least plan to stay together. Marnie continues to have feelings for Desi, even though he is still dating Clementine. Shoshanna looks to be struggling to find a job, and Jessa and Adam get arrested.

We’ll also get to see more of Adam’s crazy sister Caroline (played by the hilarious Gaby Hoffman from Transparent). In the finale last year, we found out she is pregnant with their drugged-out neighbor Laird’s baby. In case you forgot how strange Caroline actually is, she actually says this of her fetus during last season’s finale: “I can feel the labia forming. This is a woman.” 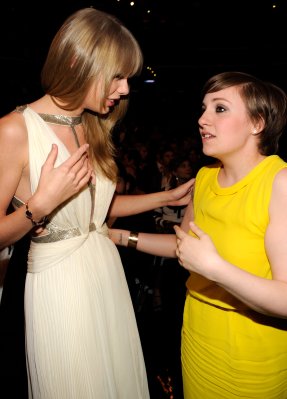 Lena Dunham Really Wants Taylor Swift on Her Show
Next Up: Editor's Pick