Muslims Are Stuck Between a Rock and a Hard Place

People light candles during a rally in support of the victims of the attack by gunmen at French satirical newspaper Charlie Hebdo at the Place de la Republique in Paris, on Jan. 7, 2015.
Martin Bureau—AFP/Getty Images
Ideas
By Jasmine El-Gamal
Jasmine El-Gamal is a civil servant in the U.S. Government and a Fellow with the Truman National Security Project. The views expressed in this article represent her personal opinion.

Wednesday’s attack on the offices of satirical newspaper Charlie Hebdo was a cowardly act intended to terrorize, intimidate, and silence. As an American Muslim, I am here to tell the attackers this: I, for one, will not give in. Unlike Anjem Choudary, the radical cleric who has taken it upon himself to speak for all Muslims in an op-ed in USA Today, I do not claim to speak for anyone. I do not presume to represent all Muslims. But let me be clear: neither does Mr. Choudary.

As I read the initial reports of the attack on Wednesday, I felt an all too familiar combination of fury, helplessness, and dread. This latest incident, following the tragic events at an Australian chocolate shop and a Pakistani school, has brought to the forefront questions that have been on our collective minds for over a decade now. Global terrorism carried out by people who claim to be Muslim has blurred the lines between Islam as an ideology, Islam as a religion, and Muslims themselves.

American Muslims—much like French Muslims, I imagine—are in between a rock and a hard place. We are often judged by the actions of extremists who would just as soon have us killed as they would our fellow non-Muslim Americans—let us not forget that two of the victims in Paris were Muslims. These extremists, like Choudary, would have you believe that all Muslims want to see everyone abide by Sharia law; that all Muslims believe adulterers should be stoned, women covered, and cartoonists murdered for exercising free speech. If we live in the East and are not religious, we are sometimes derided and even threatened by these fanatics who have no tolerance for dissent.

However, if we live in the West and are religious, we are sometimes viewed with suspicion in our own countries, where it is easier to walk around in Daisy Dukes than to cover your head with a scarf. In an era defined by the question “Why do they hate us?” we are viewed as “the other” by both “they” and “us.”

Make no mistake: I do not like seeing insulting cartoons of the Prophet Muhammad. I also do not like seeing an image of the Virgin Mary covered in elephant dung. I do not think anyone should go out of their way to insult beliefs that so many hold so dear. But do I think anyone should be killed for it? With all my heart, my answer is no. And if you look at the Facebook and Twitter pages of non-extremist Muslims throughout the world, you will see them saying the same thing.

Some of the media coverage following the Paris attacks has shown me that there is still much work to be done by all of us in the wake of recent events to combat the vitriol proliferated by both the likes of Choudary as well as anti-Muslim extremists on the other side of the spectrum. It is not really my place to address French citizens or any other citizens other than my own fellow countrymen. And so my plea to you is this: As we have this difficult and public conversation, let’s not forget who we are. We are Americans. Let’s provide an example to be followed. In this time of crisis, let’s band together rather than picking each other apart.

This does not mean we should self-censor or avoid stating painful facts. But if you are a Muslim, take a minute to speak out against terrorism—even if you don’t think you should have to. If you are not Muslim, do the same against anti-Muslim biases. In the age of Facebook and Twitter, everyone has some form of a podium at which they can stand and speak their mind freely. Let’s do so together.

Mr. Choudary has his opinions and beliefs, and I believe strongly in his right to air them. Unlike him, I do not think others should have their microphones or pens taken away when their views insult me or anyone else. I will simply use my own in response. I will not, however, claim to speak for anyone but myself—and I urge Mr. Choudary to do the same.

Jasmine El-Gamal is a civil servant in the U.S. Government and a Fellow with the Truman National Security Project. The views expressed in this article represent her personal opinion. 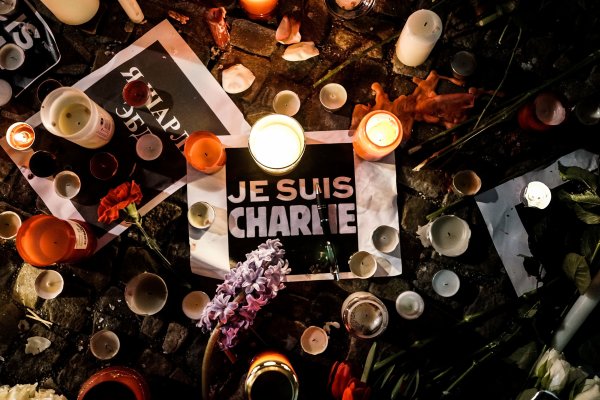 Three Reasons France Became a Target for Jihad
Next Up: Editor's Pick