SpaceX to launched its Falcon 9 rocket early Saturday morning in an ambitious attempt to open a new era of rocket reusability, potentially reshaping space travel after years of fits and starts.

The Falcon 9 launched from Cape Canaveral Air Force Station in Florida at 4:47 a.m. E.T., and will attempt to land the first stage of the rocket on an ocean barge. An initial launch attempt was scrapped at the last minute a few days earlier.

Since the beginning of space programs, rockets have been used just once and then discarded. Billionaire Elon Musk’s SpaceX venture is aimed at making spaceflight more affordable by creating reusable rockets.

“If one can figure out how to effectively reuse rockets just like airplanes, the cost of access to space will be reduced by as much as a factor of a hundred,” Musk once said. “A fully reusable vehicle has never been done before. That really is the fundamental breakthrough needed to revolutionize access to space.” 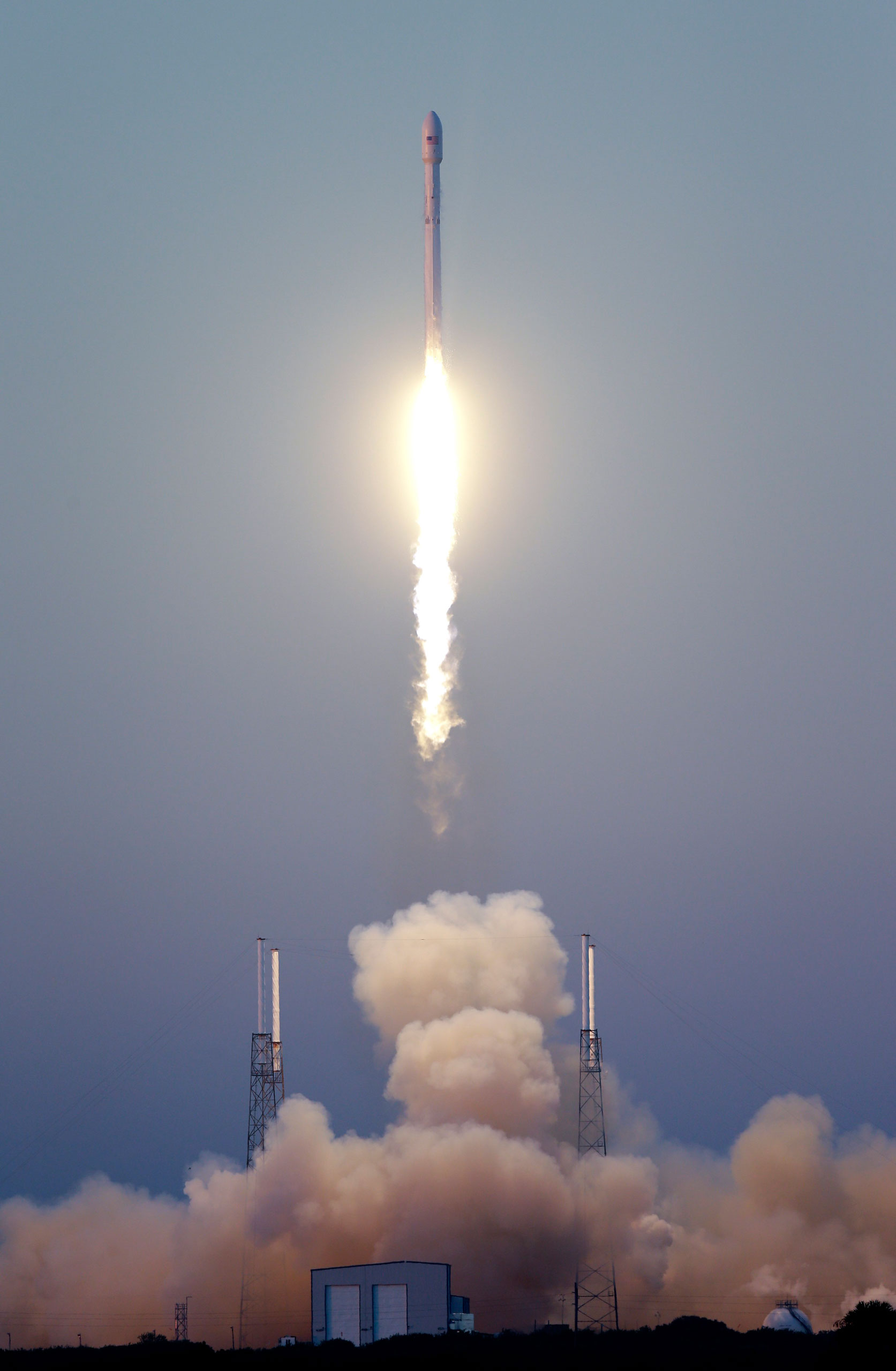 SpaceX embarked on its first deep space mission with the launch of this Falcon 9 rocket on Feb. 11, 2015 at Cape Canaveral, Fla., after two previous failed attempts. Onboard is the Deep Space Climate Observatory, which will head 1 million miles from Earth to watch for incoming geomagnetic storms that could trigger power outages on our planet.
John Raoux—AP 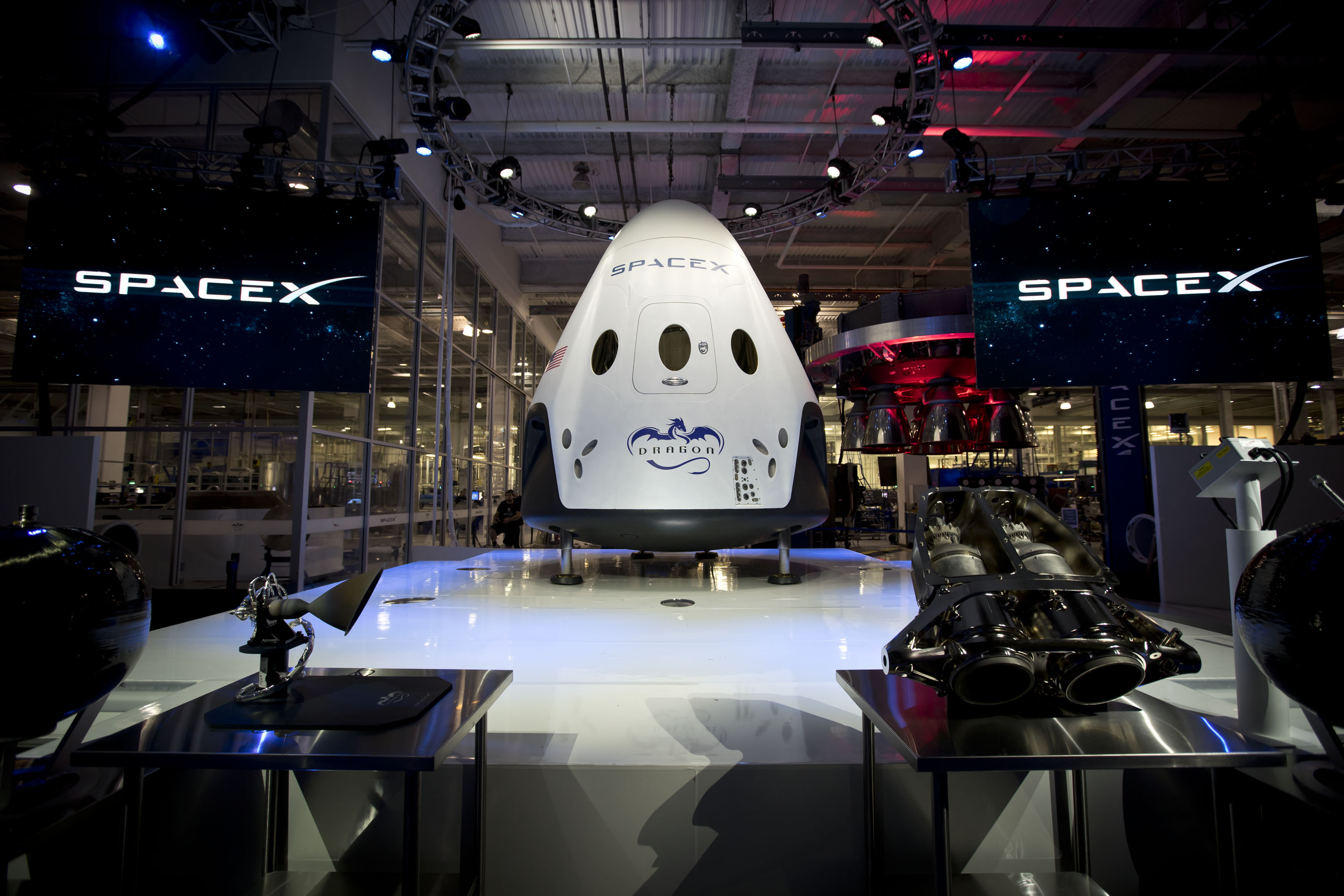 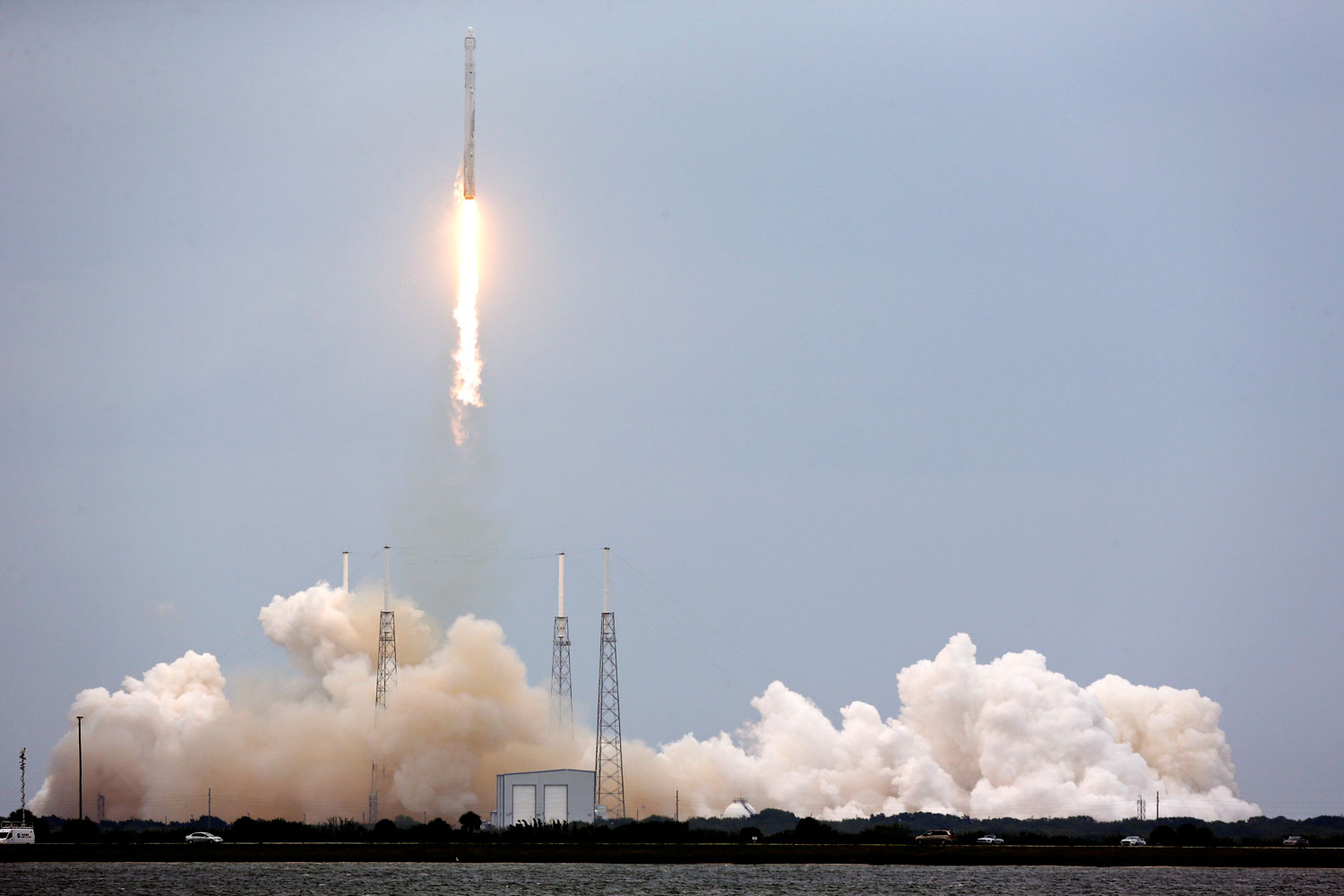 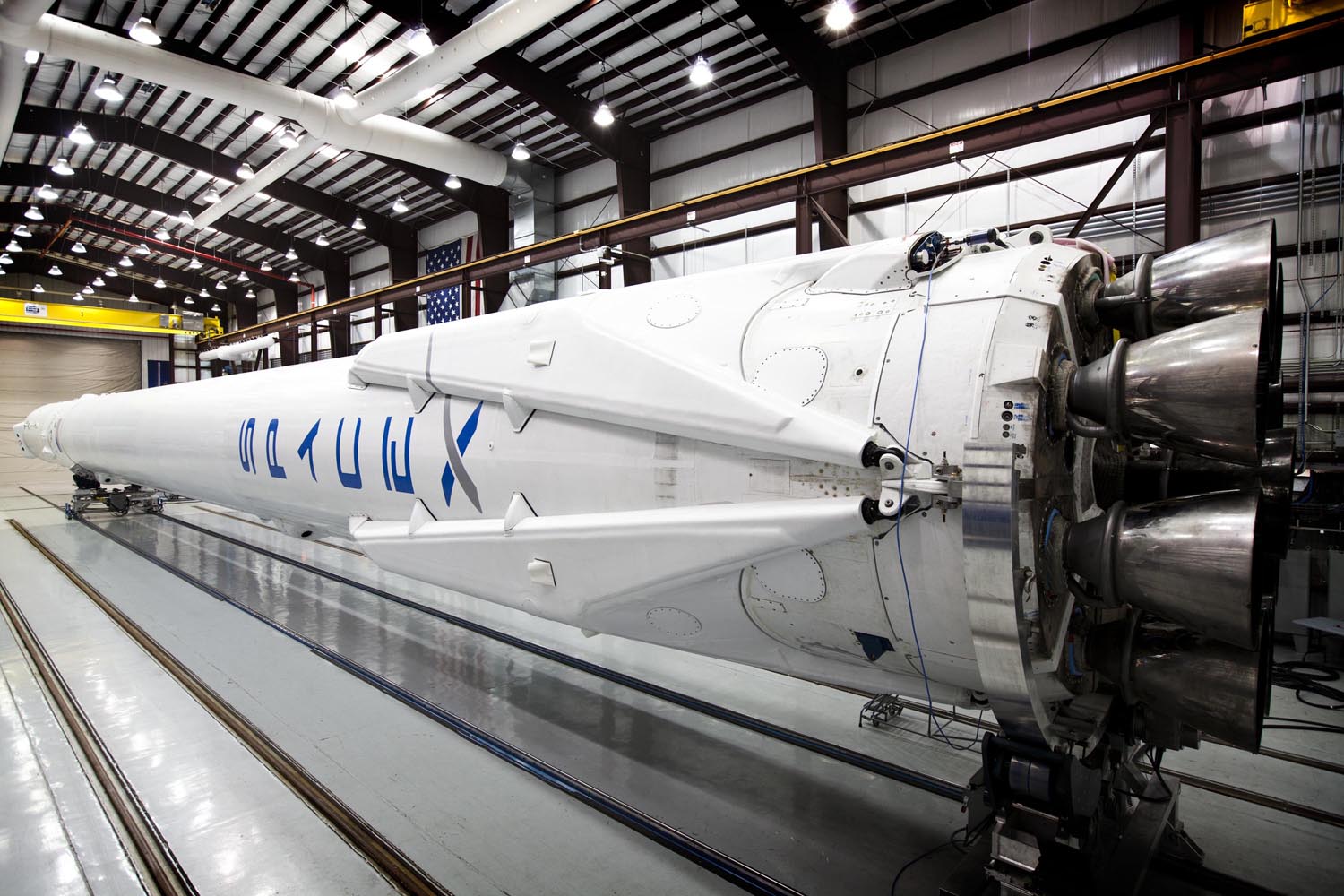 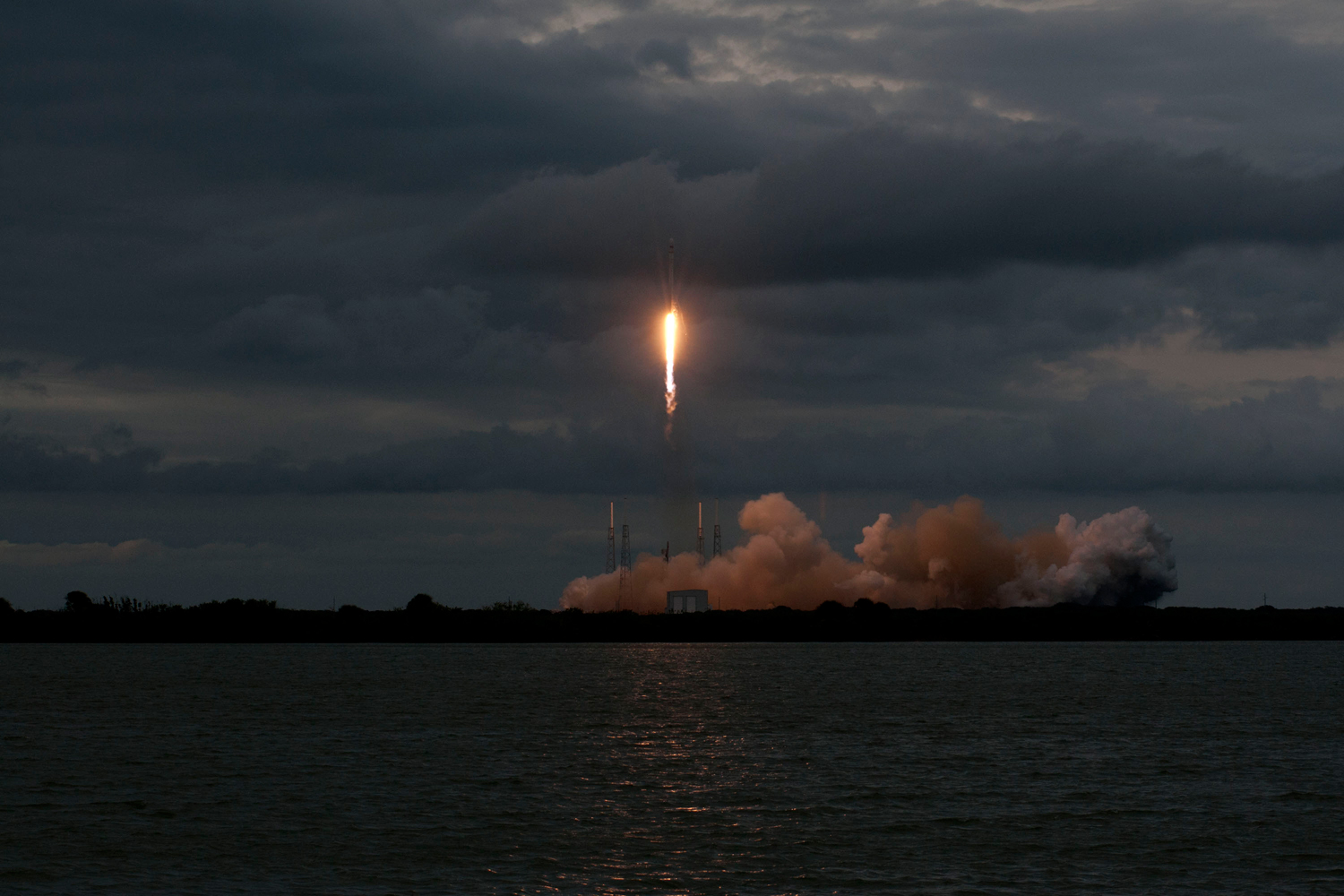 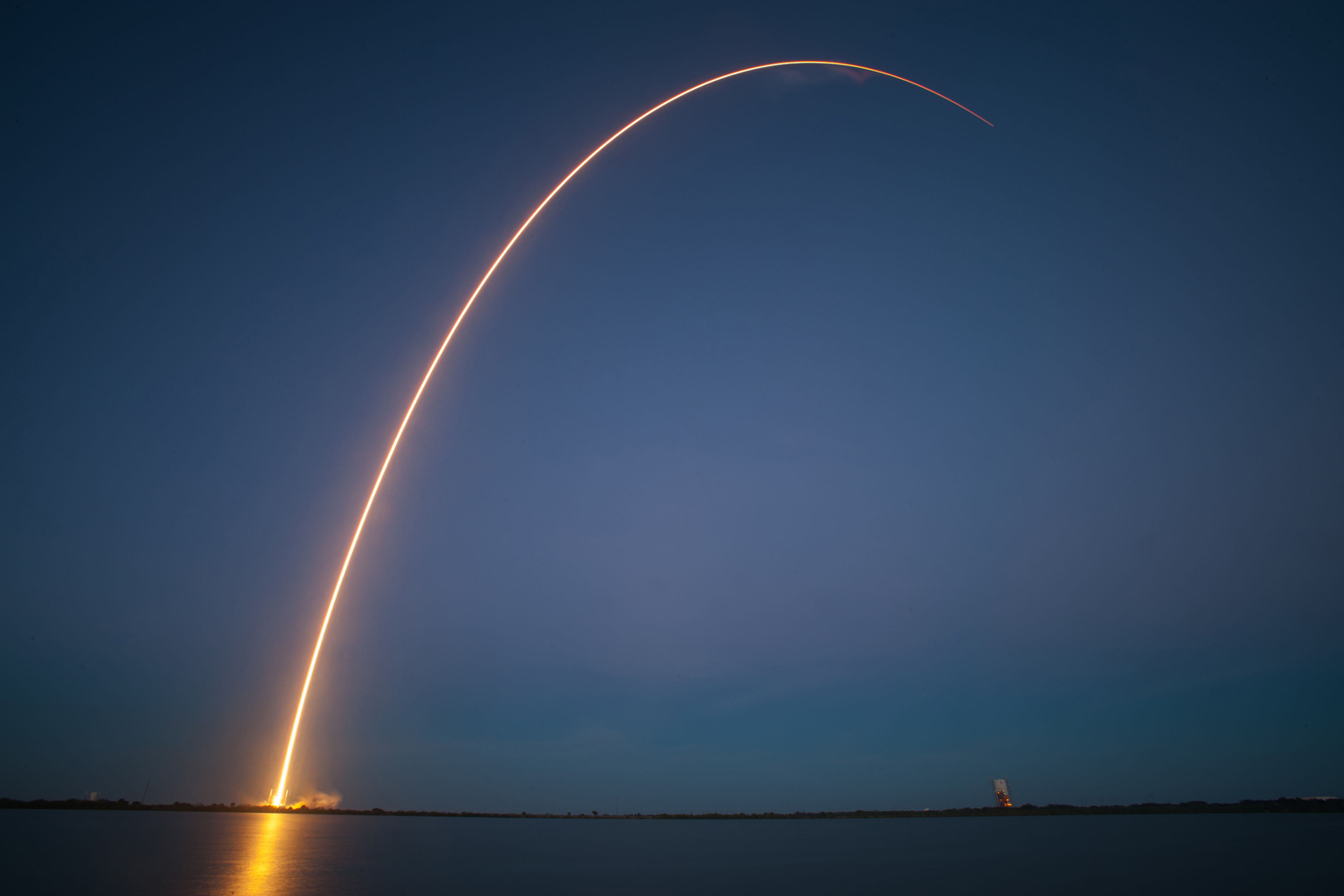 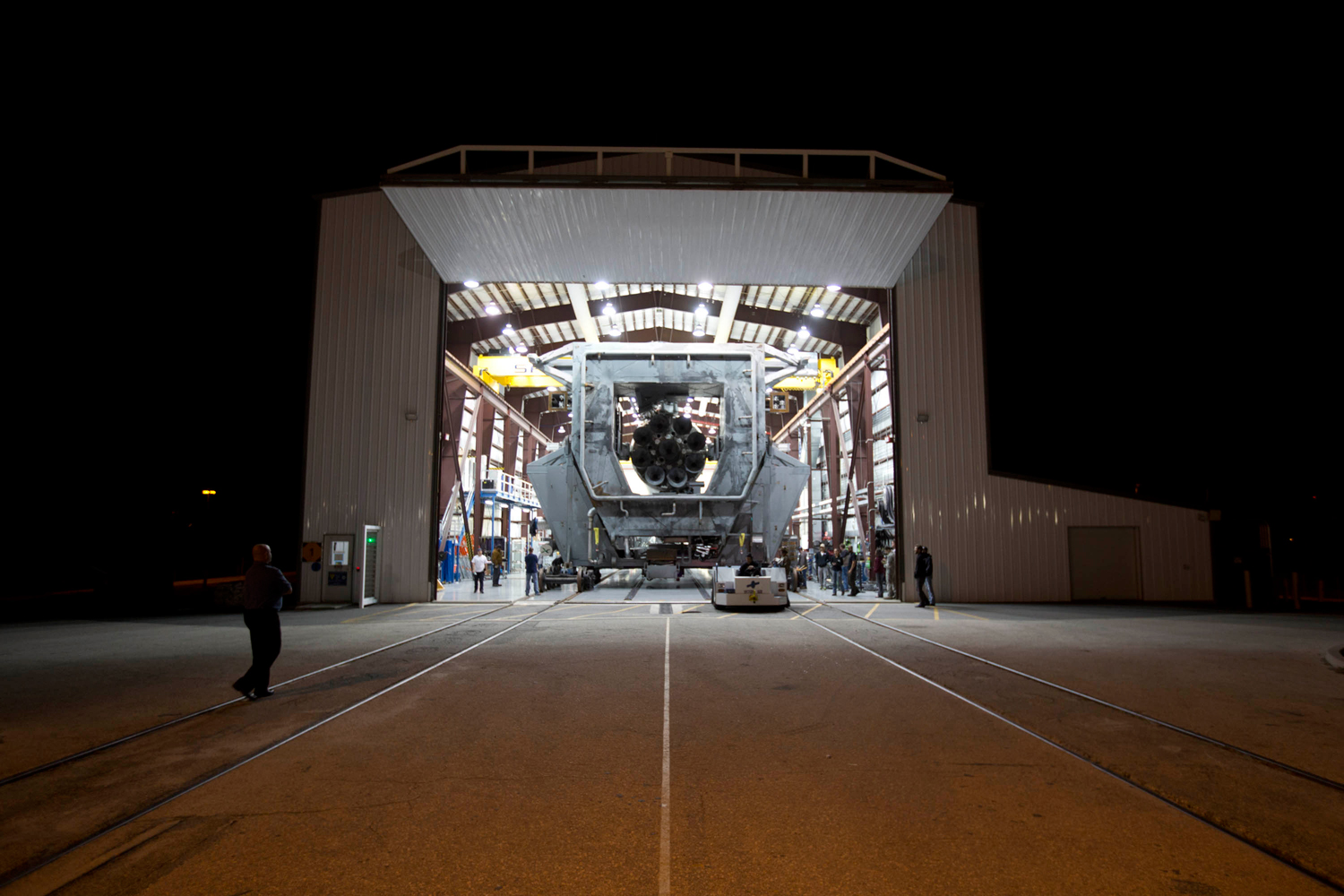 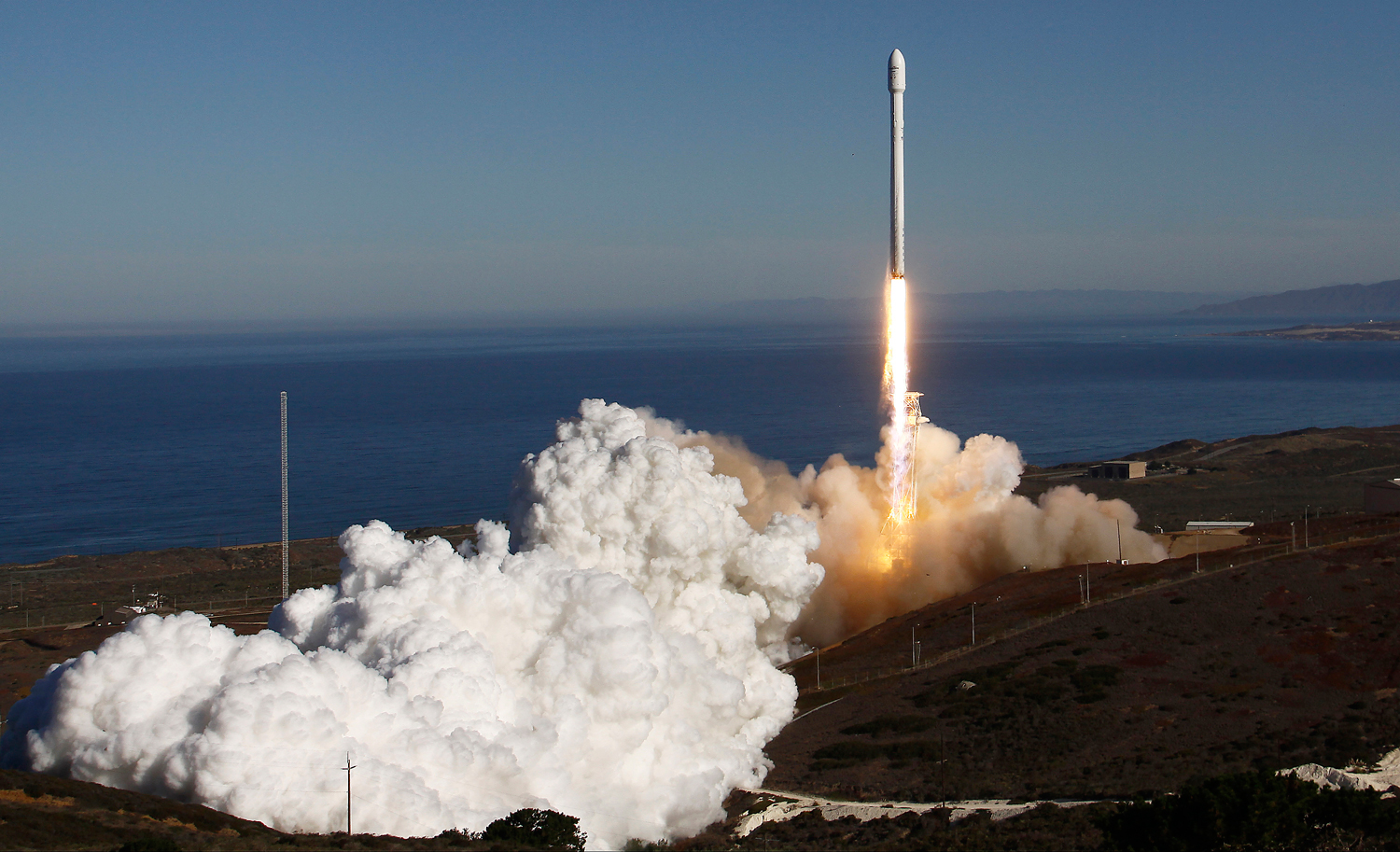 A Falcon 9 rocket carrying a small science satellite for Canada is launched from a newly refurbished launch pad in Vandenberg Air Force Station in California, on Sept. 29, 2013.
Gene Blevins—Reuters 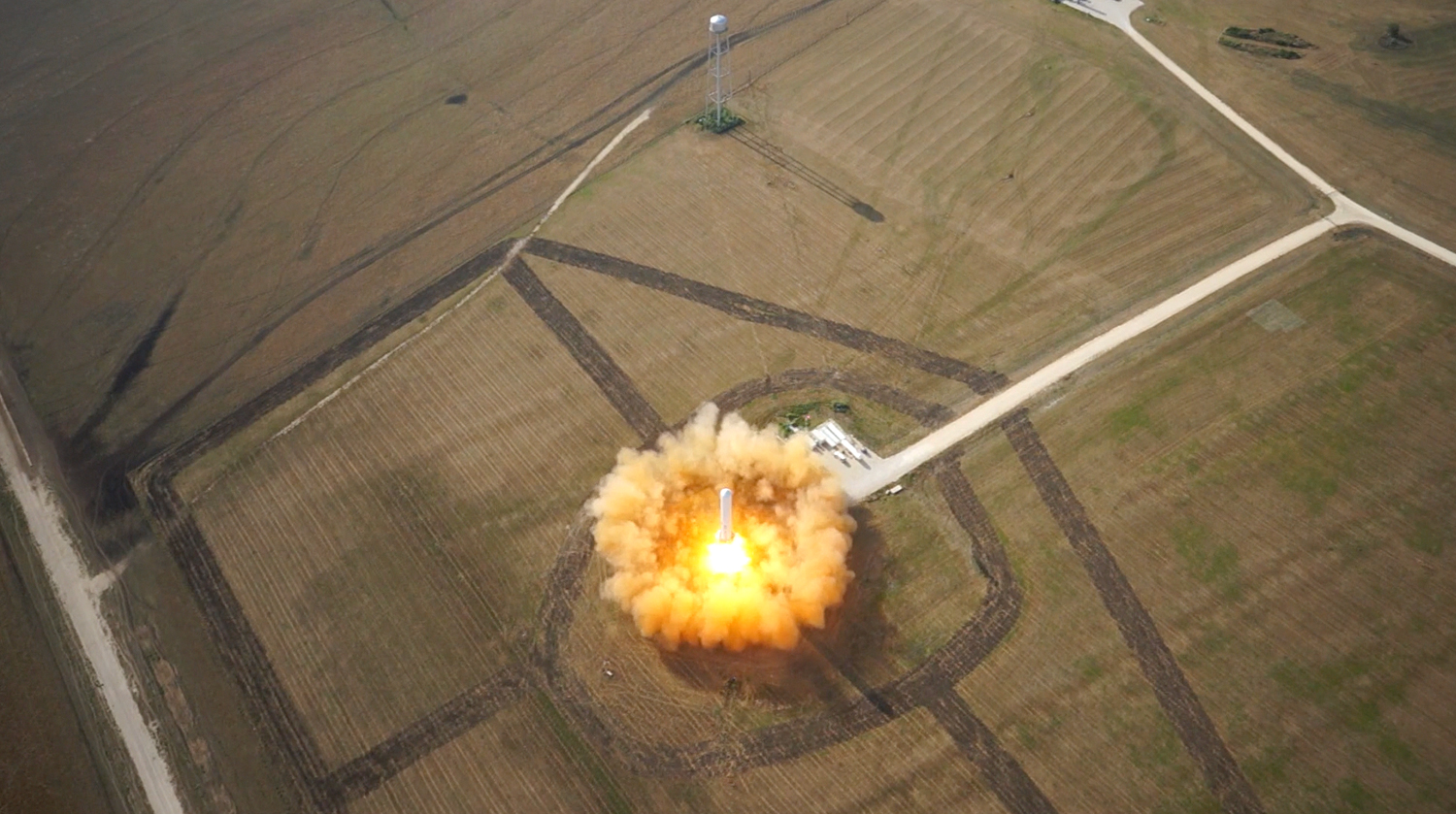 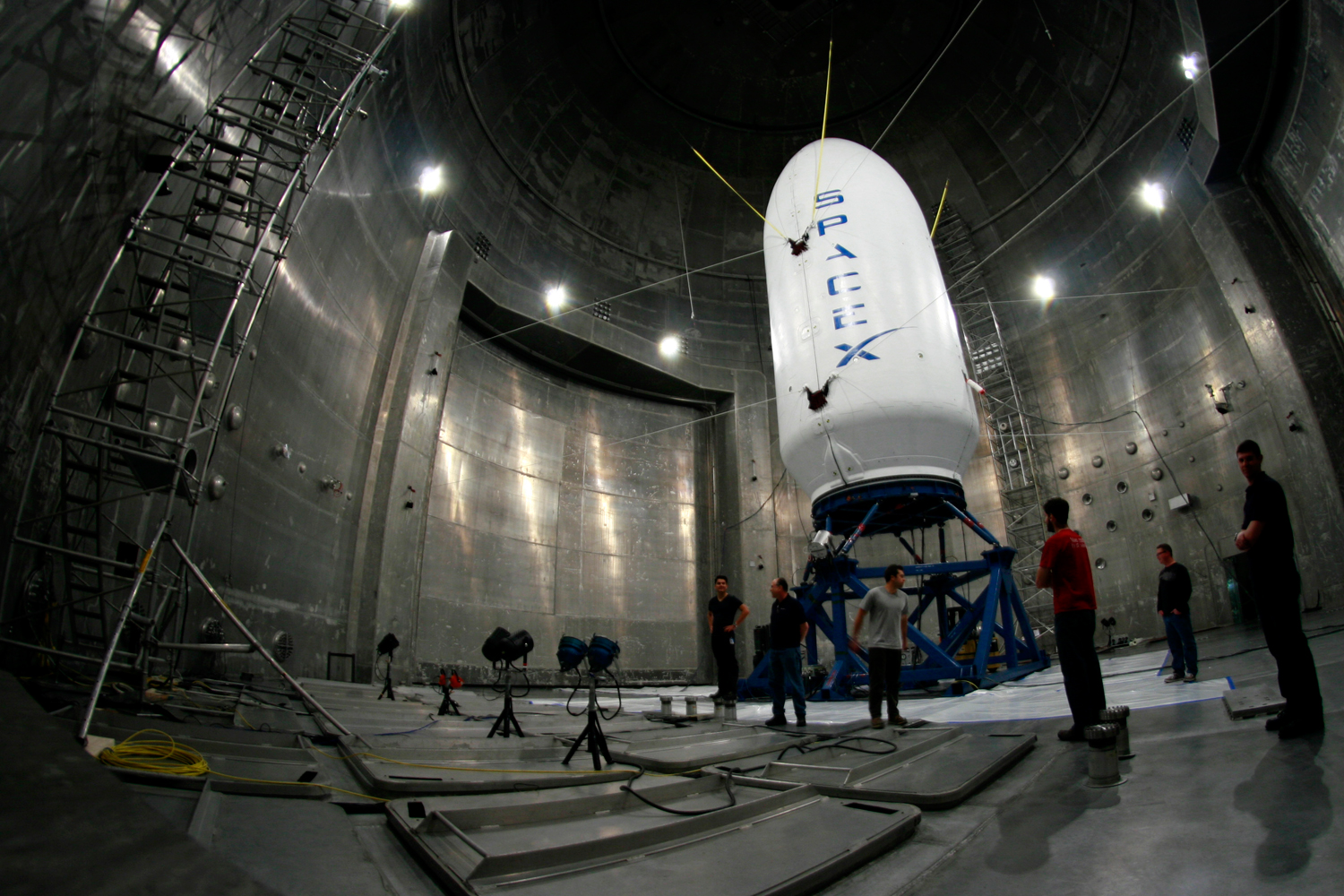 A SpaceX component preparing for testing in the world's largest vacuum chamber at NASA Glenn Research Center in Cleveland.
SpaceX 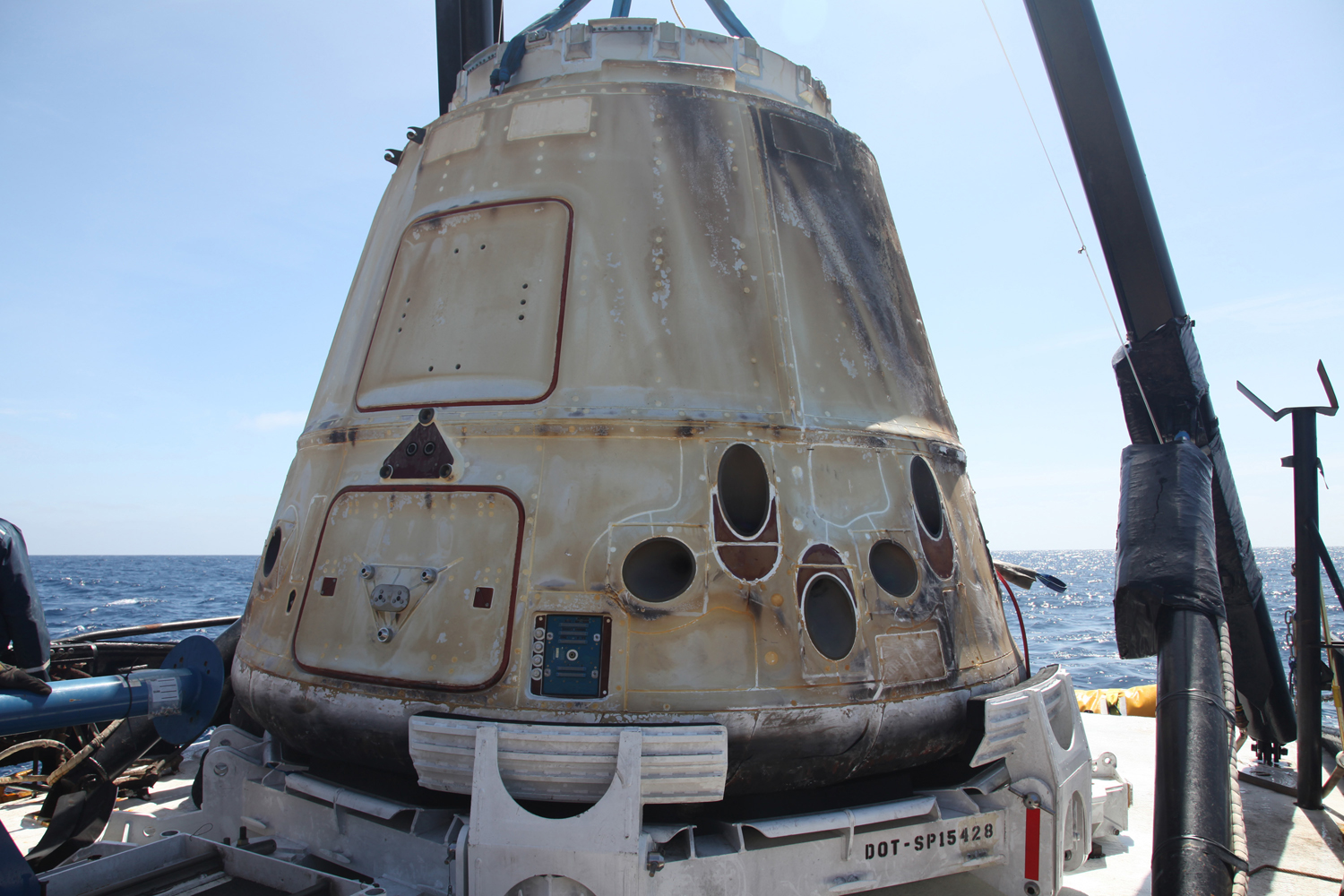 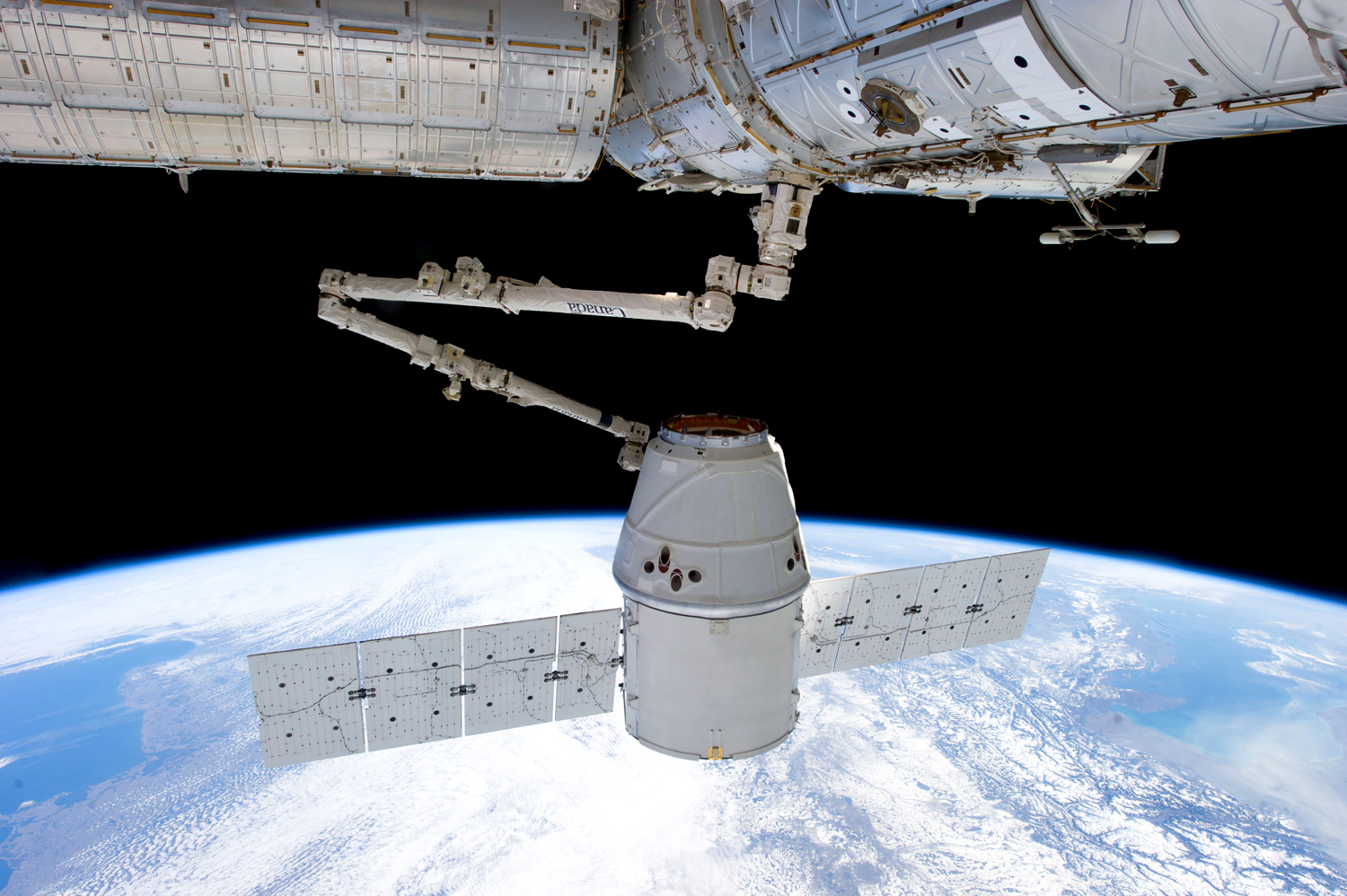 SpaceX's Dragon is grappled by the International Space Station on April 13, 2013.
NASA 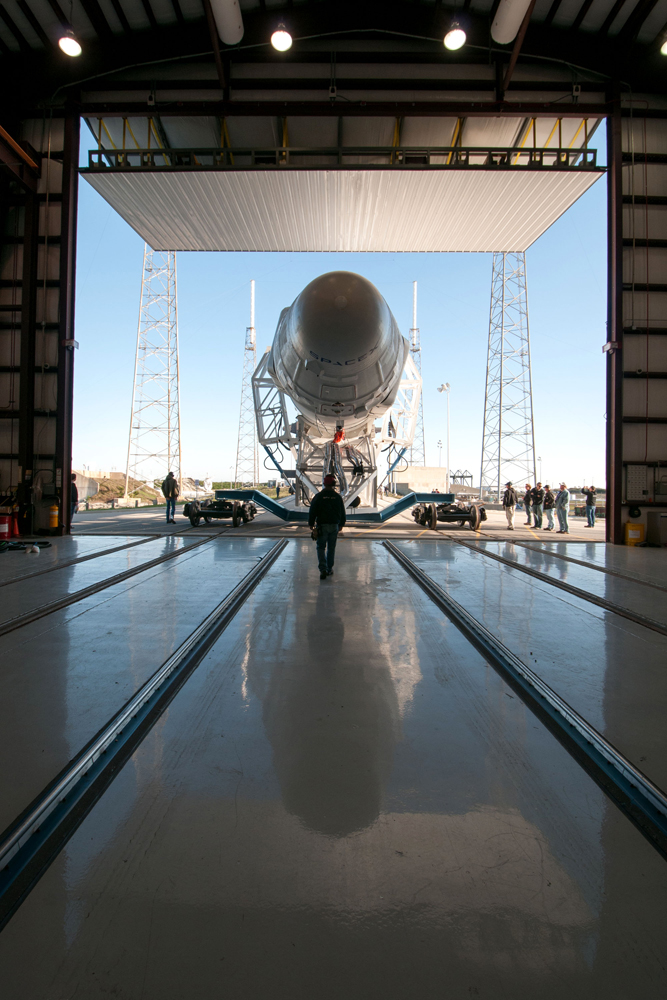 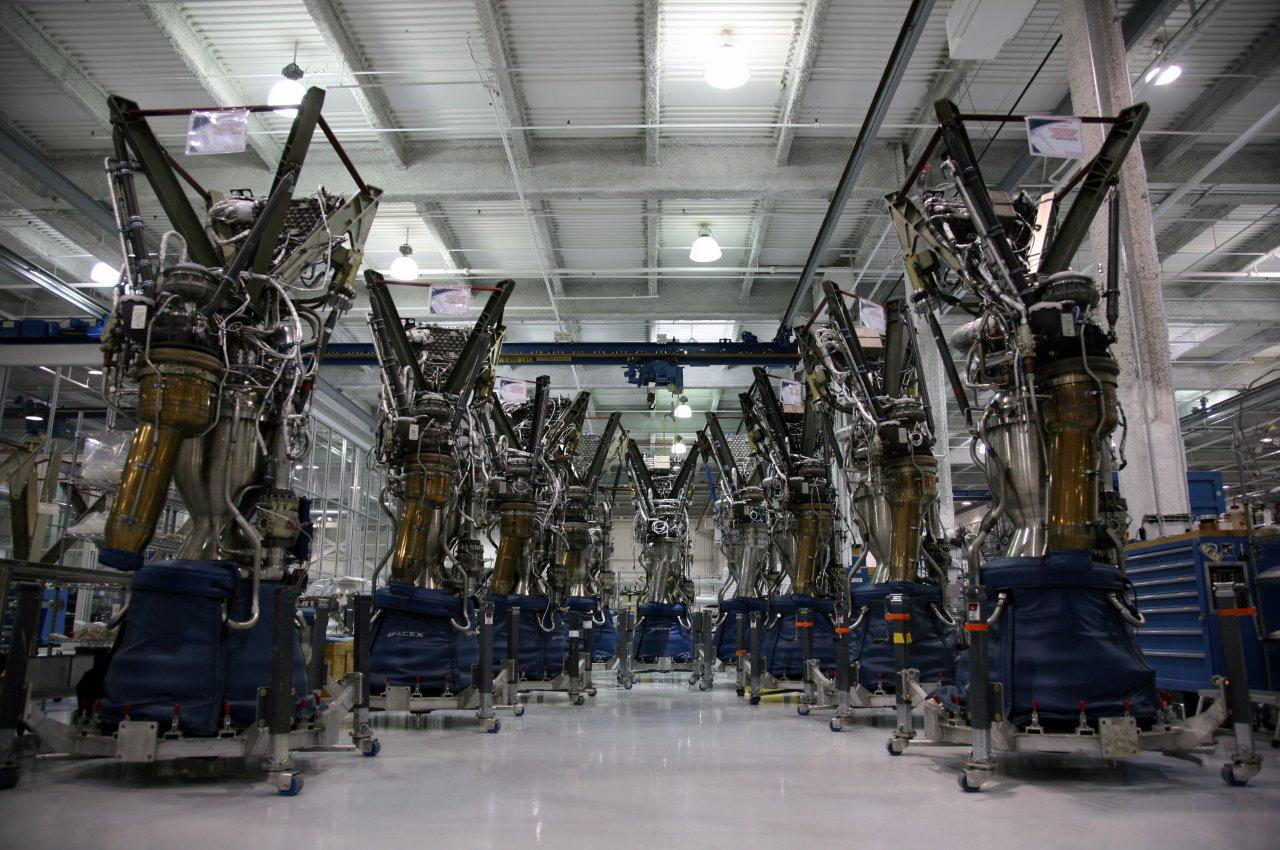 Nine Merlin engines for the inaugural Falcon 9 flight, ready to be installed in the booster, on March 8, 2013.
SpaceX 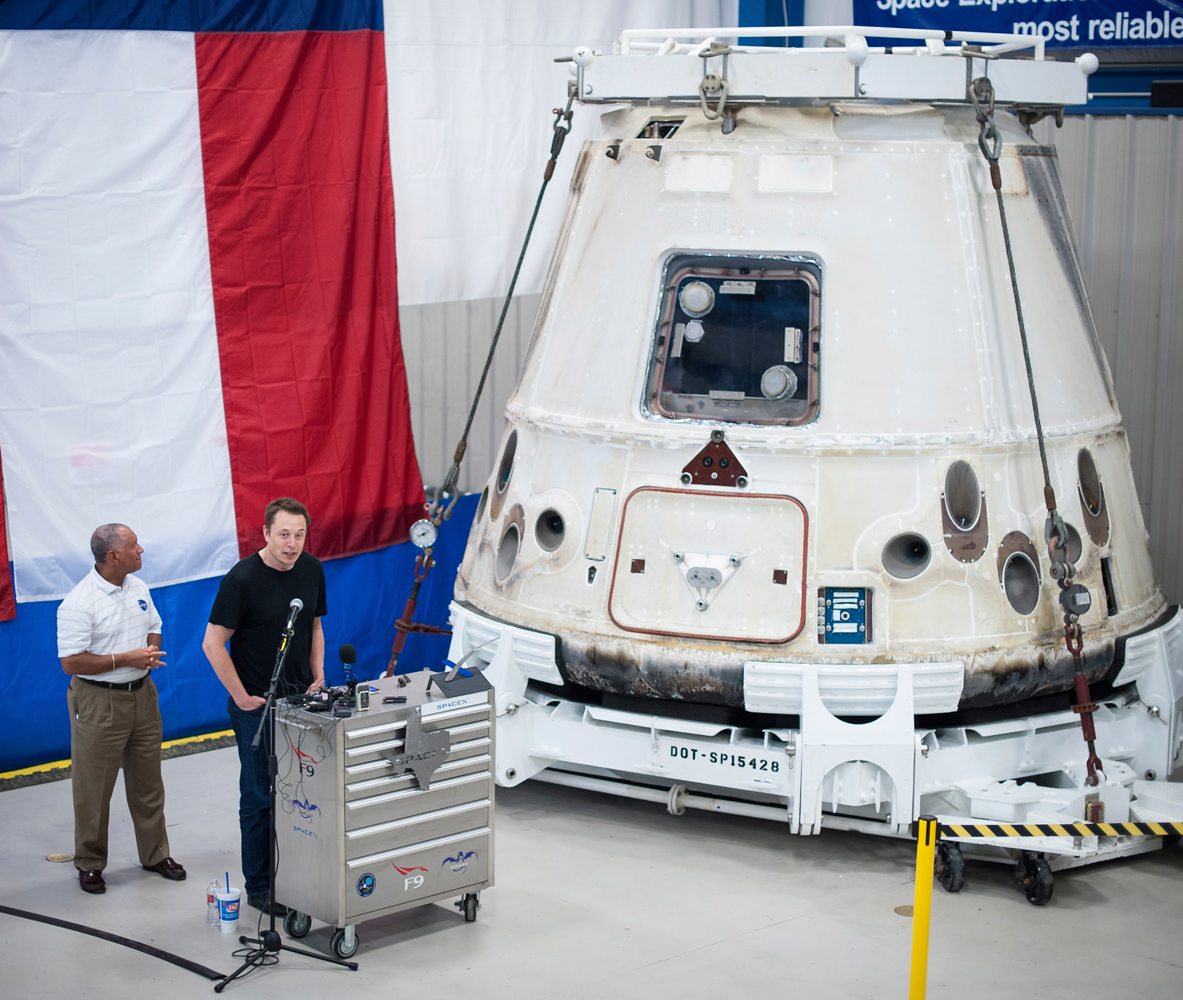 From left: NASA Administrator Charles Bolden and SpaceX CEO and Chief Designer Elon Musk view the Dragon capsule that returned to Earth on May 31, 2012 following the first successful mission by a private company to carry supplies to the International Space Station, at the SpaceX facility in McGregor, Texas, on June 13, 2012.
Bill Ingalls—NASA/Reuters 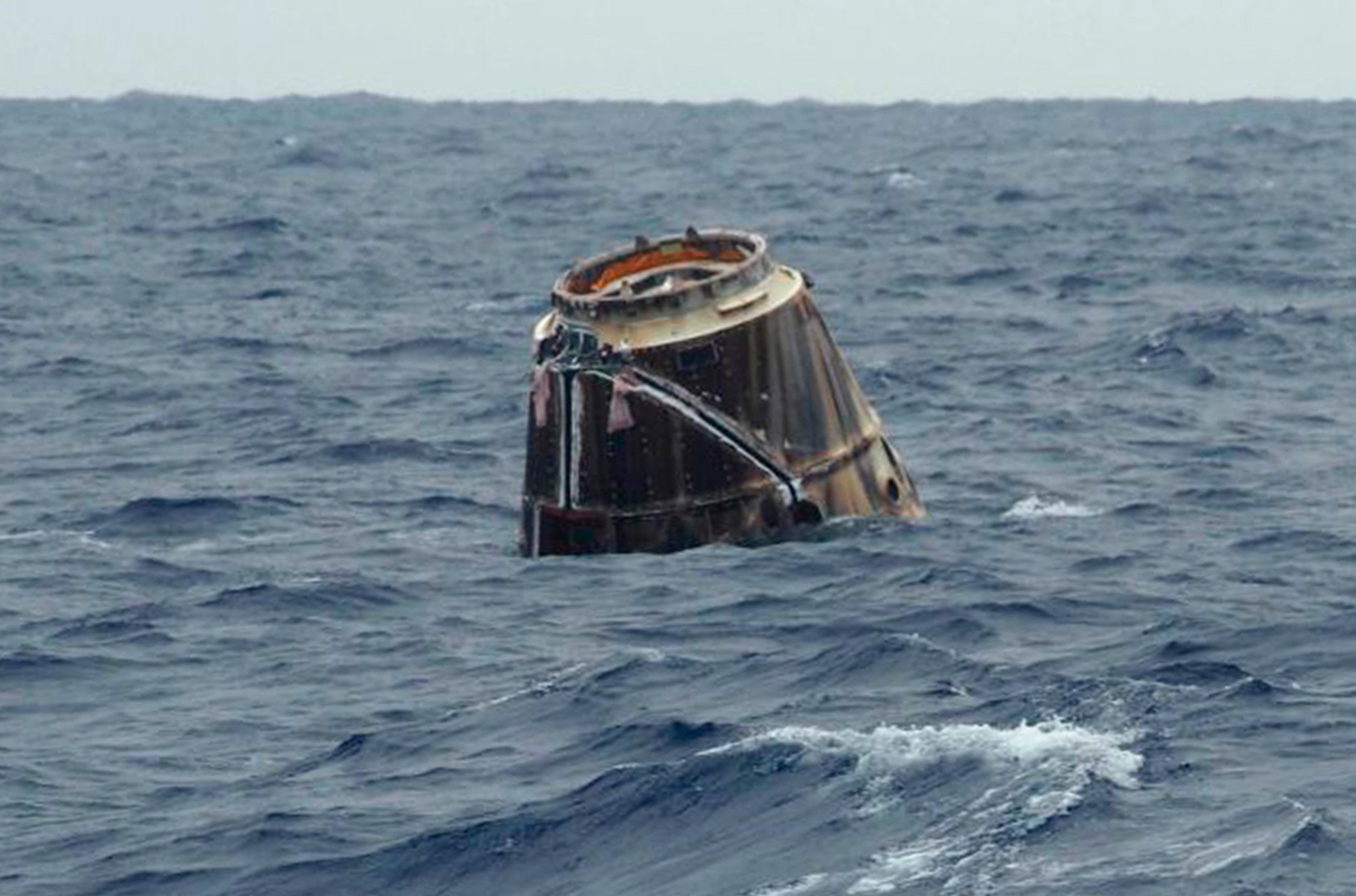 SpaceX's unmanned Dragon capsule floats in the Pacific Ocean off of Baja California on May 31, 2012.
SpaceX/Reuters 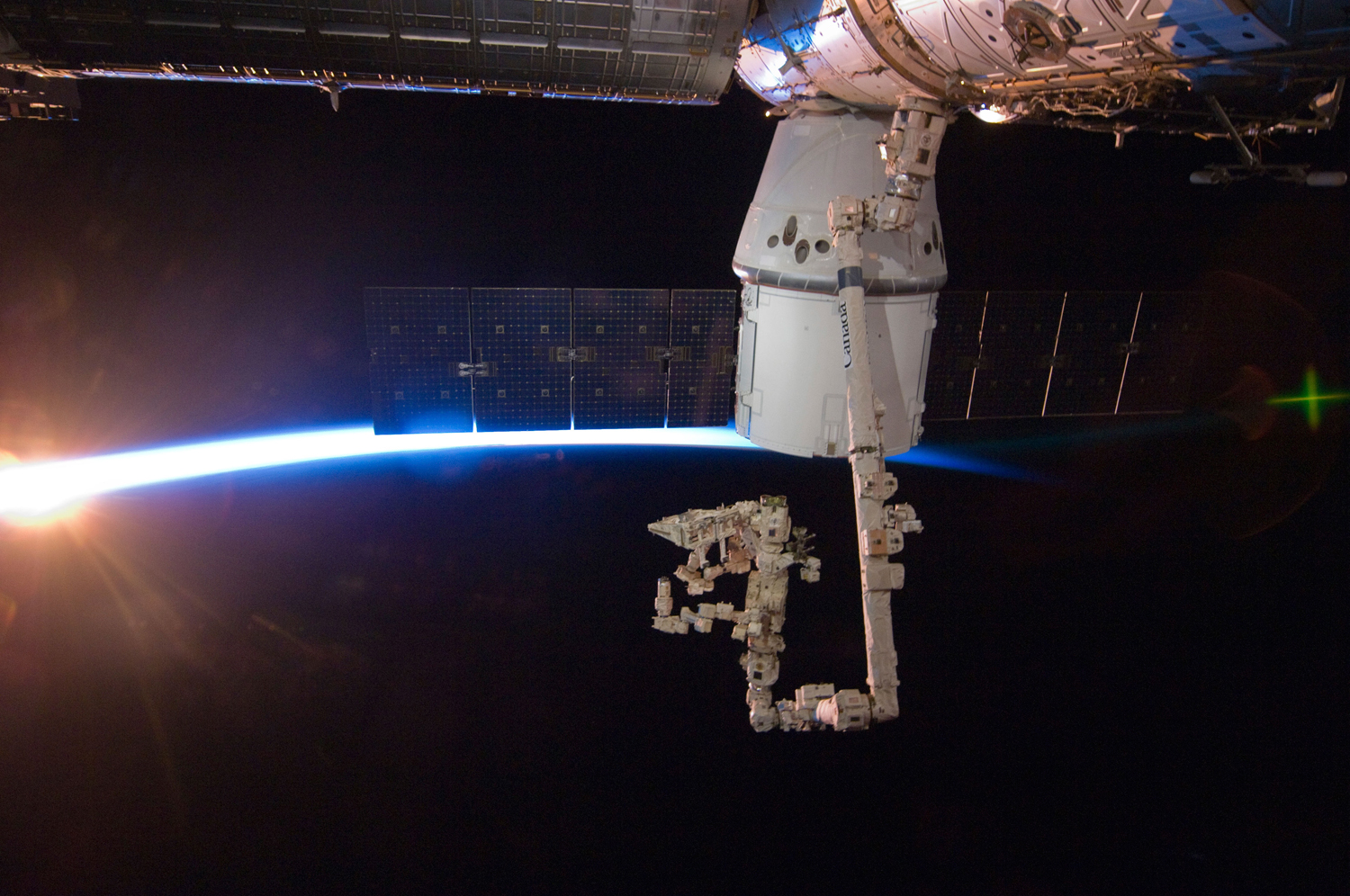 SpaceX's Dragon commercial cargo craft is berthed to the International Space Station on May 25, 2012.
NASA/Reuters 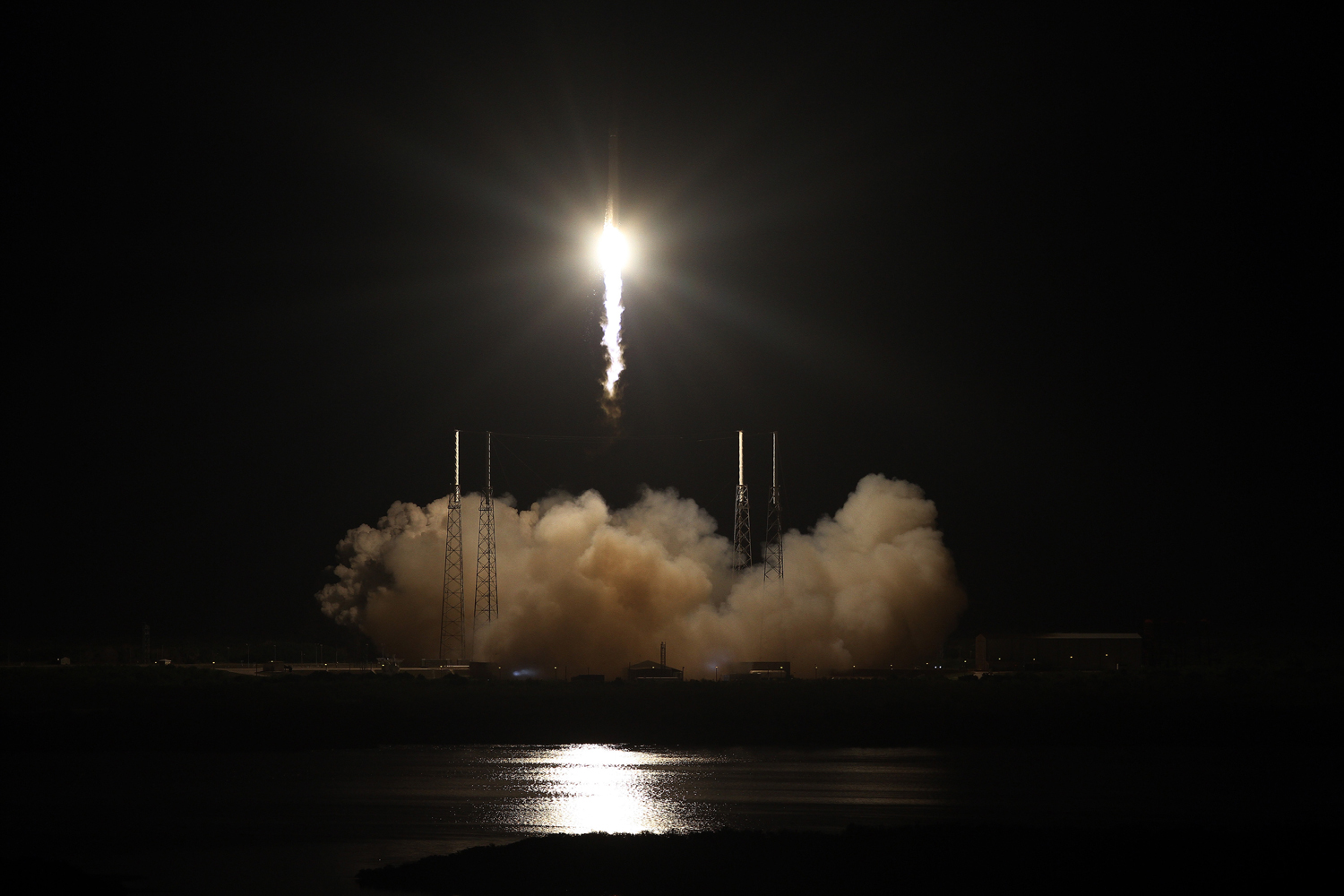 A Falcon 9 rocket carrying the Dragon spacecraft blasts off from Complex 40 at Cape Canaveral, on May 22, 2012.
Red Huber—MCT/Getty Images 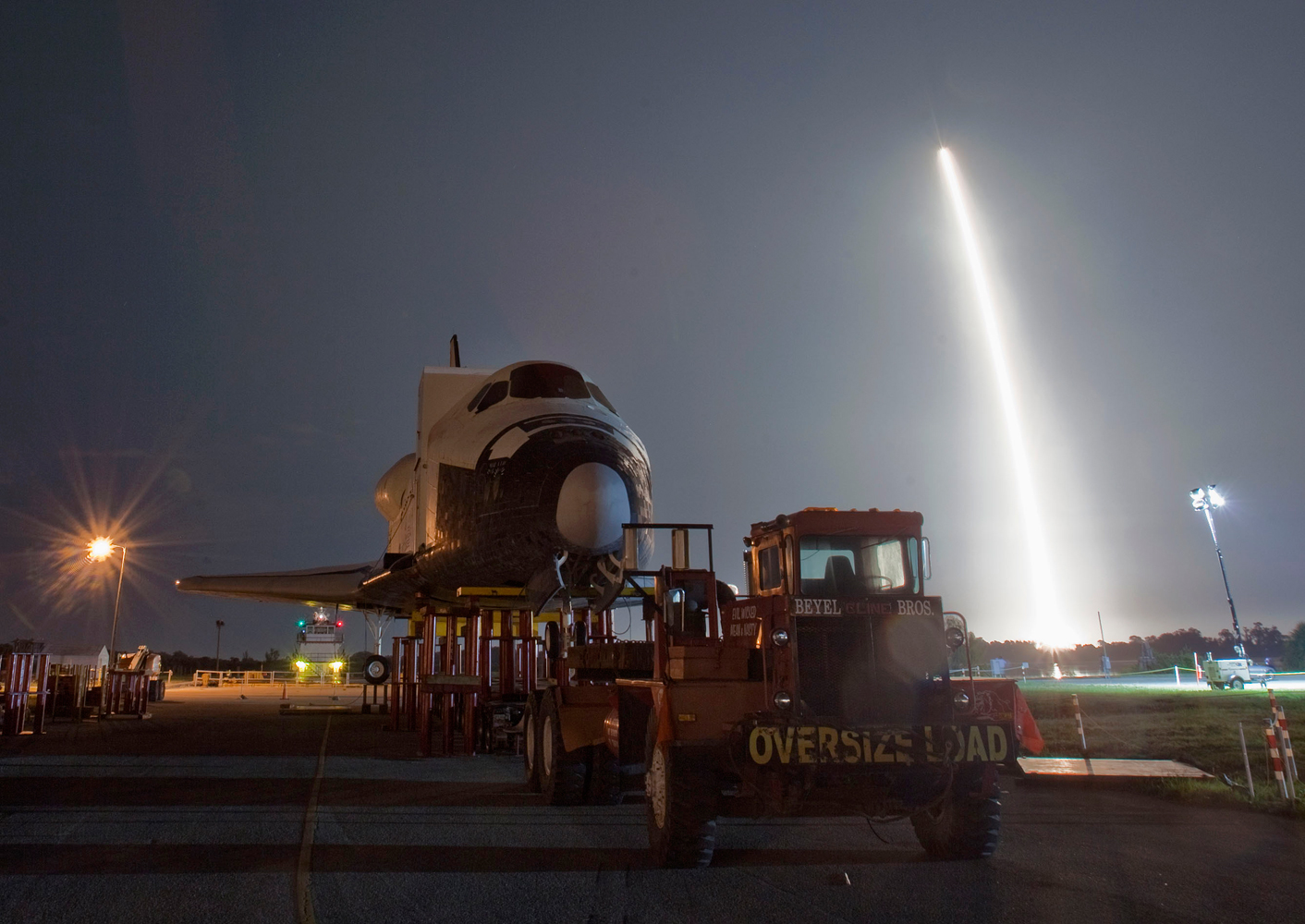 The SpaceX Falcon 9 test rocket lifts off from Space Launch Complex 40 at Cape Canaveral on May 22, 2012.
Pierre Ducharme—Reuters 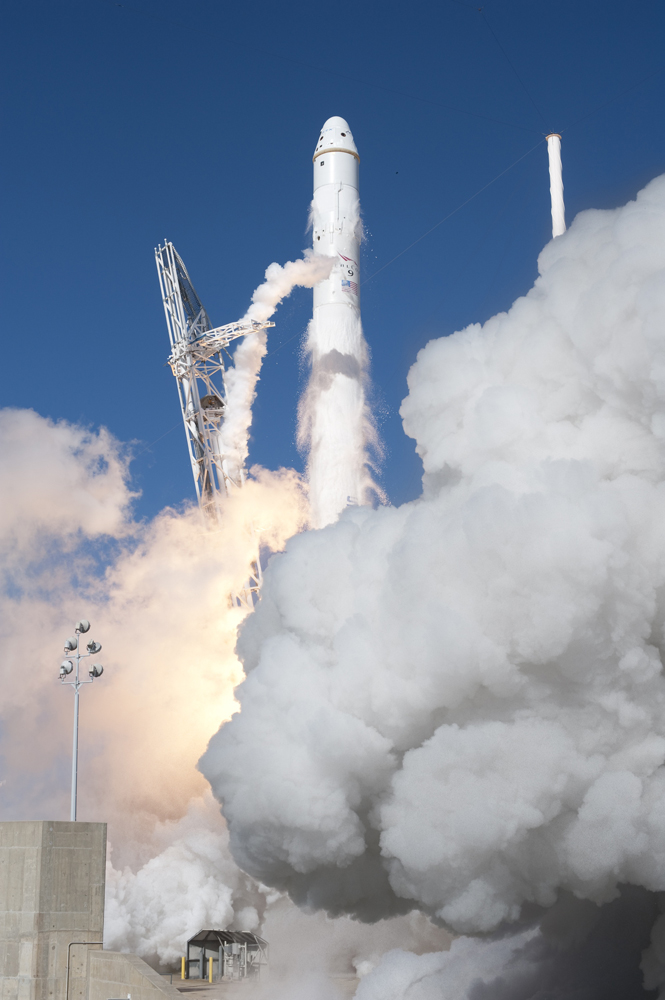 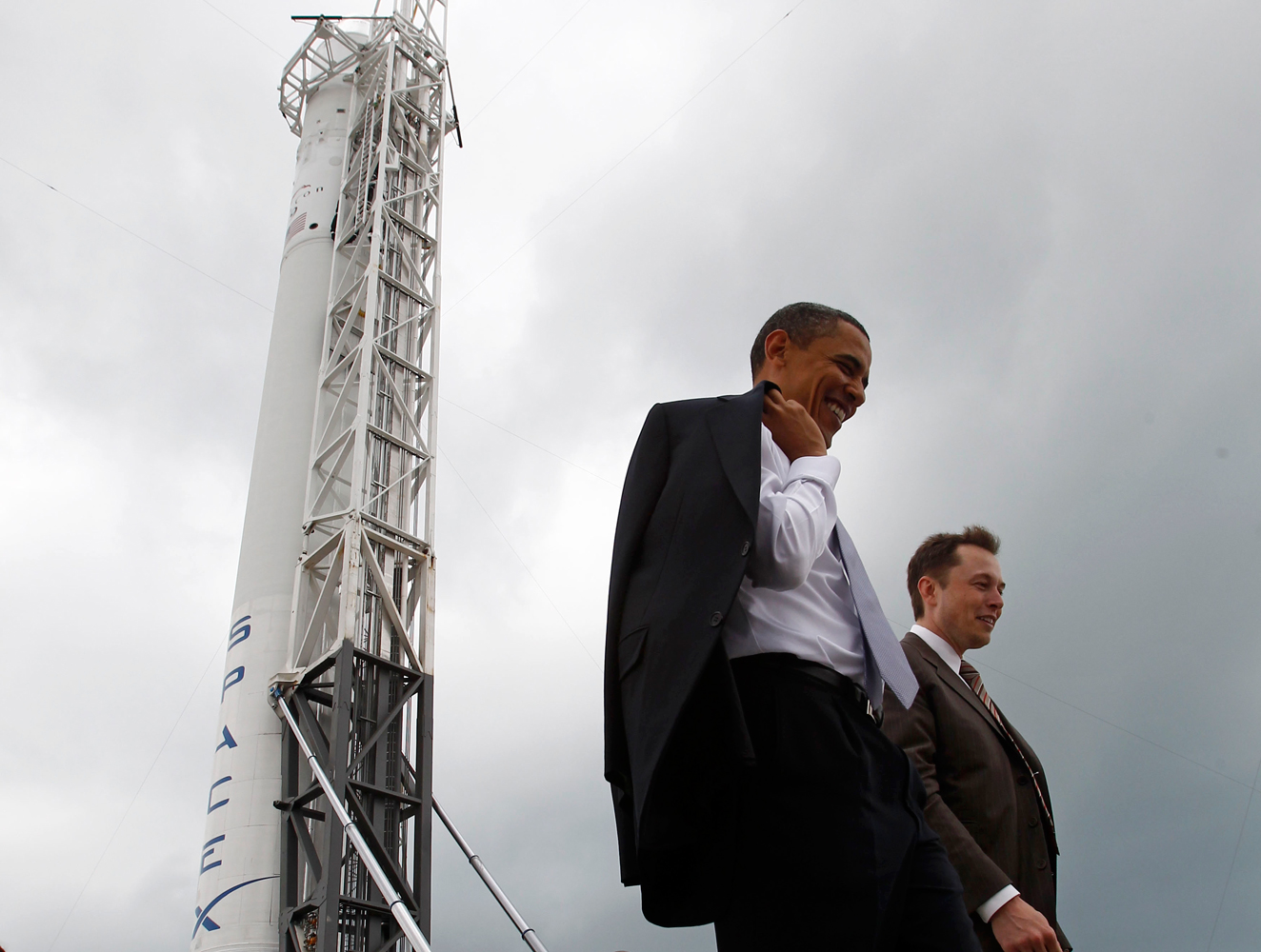 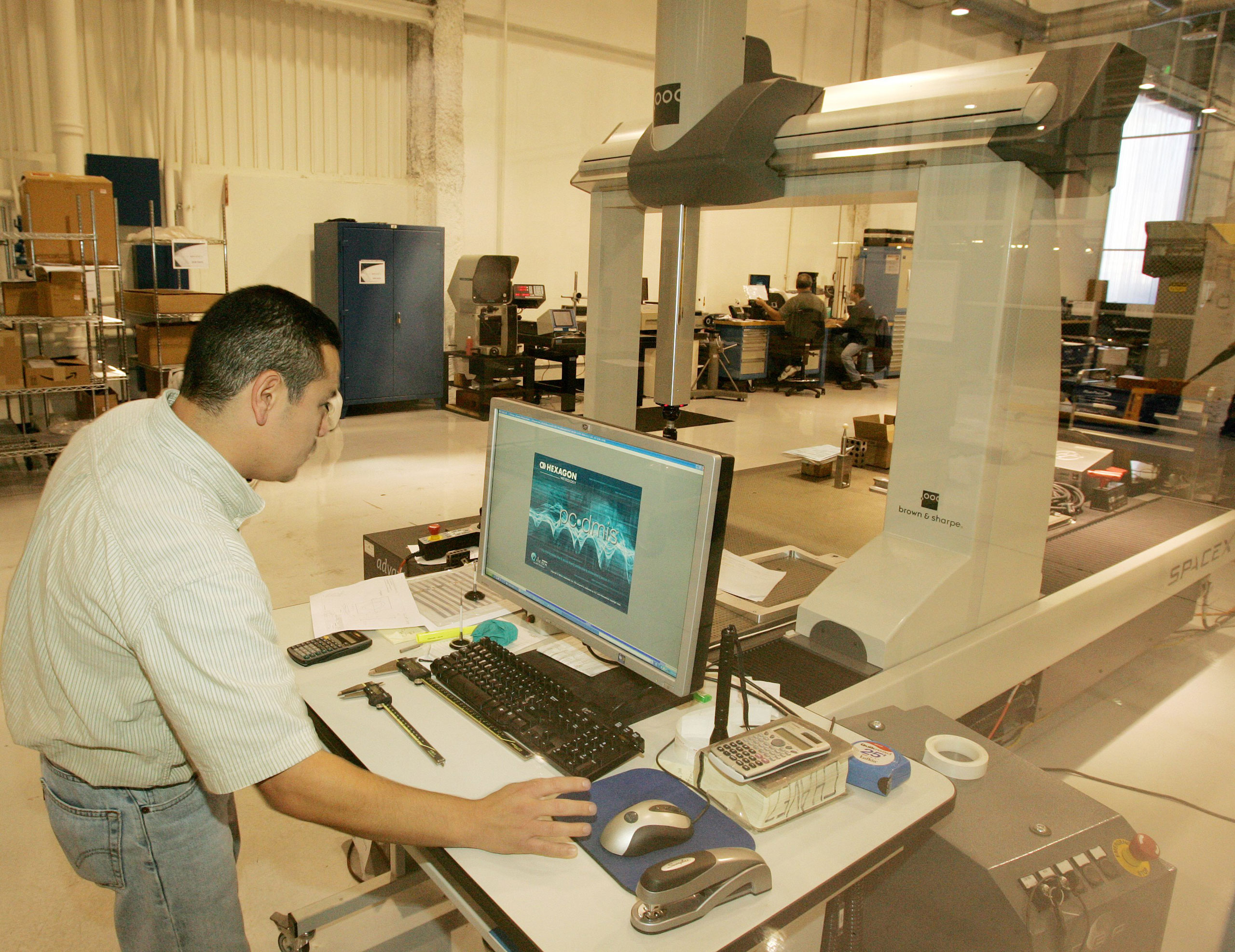