Signals Have Been Detected From the AirAsia Jet's Data Recorders

Indonesian navy divers, left, prepare to depart from the vessel KRI Banda Aceh to conduct operations to lift the tail of AirAsia Flight QZ 8501 in the Java Sea on Jan. 9, 2015
Adek Berry—AFP/Getty Images
By TIME Staff

Indonesia says it has detected signals from the black-box recorders of downed AirAsia Flight 8501 and is racing to reach them.

S.B. Supriyadi, director of operations for Indonesia’s National Search and Rescue Agency (Basarnas) in Pangkalan Bun — the Borneo town that has become the center for search operations — told the BBC, “A ship detected the pings. The divers are trying to reach it.”

A salvage operation involving helicopters and lifting balloons was also launched Friday in a bid to recover the tail section of the jet, which lies at a depth of 30 m (100 ft.) in the Java Sea, about 30 km (20 miles) from where the flight lost contact with air-traffic control, Reuters reports.

Authorities had been hopeful that the flight-data recorders would be found with the tail, since the flight recorders are housed in that section of the Airbus A320-200. But Santoso Sayogo, an official at Indonesia’s National Transportation Safety Committee, told Reuters it appeared the boxes and tail were not together.

The crash of the AirAsia jet — which went down on Dec. 28 with 162 on board as it flew from Indonesia’s second city Surabaya to Singapore — has meanwhile given fresh impetus to the use of ejectable black boxes on commercial flights. These are flight-data recorders that can be deployed from a descending aircraft and float on water, instead of creating the recovery problems that salvage crews are now facing.

Citing an anonymous official from the International Civil Aviation Organization (ICAO), Reuters reports that ejectable black boxes will be on the agenda at an important ICAO safety conference next month.

“The time has come that deployable recorders are going to get a serious look,” the official told the news agency.

Ejectable data recorders are already used on military aircraft and on many helicopters, but they are more expensive to produce and have not been tested on large commercial jets.

However, some experts believe that transmitting data in real time would be a better option.

“The current fixed recorders are highly reliable and cost effective and it is rare to not recover them,” Mike Poole, a Canadian authority on flight recorders, told Reuters. 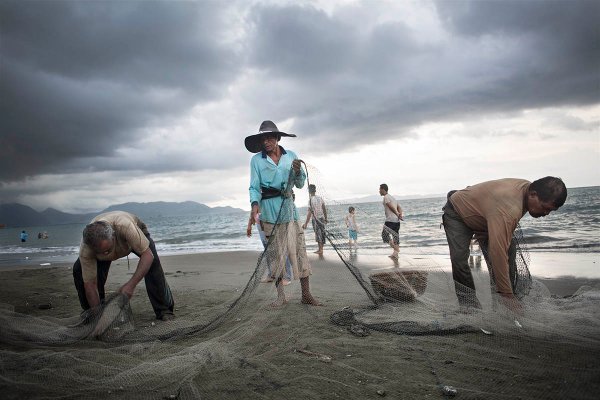 What the Waves Did to Aceh
Next Up: Editor's Pick