“Put simply, what I’d like to do is to see the first two years of community college free for everyone who’s willing to work for it,” Obama said in a video filmed Wednesday aboard Air Force One and posted to Facebook. He made the announcement as part of his pre–State of the Union tour and will formally lay out the proposal Friday in a speech in Tennessee.

The White House estimated it would save the average community-college student $3,800 annually and said it could benefit 9 million if fully realized.

White House domestic-policy director Cecilia Muñoz said the proposal is a federal-state partnership, with federal funding covering 75% of the tuitions and participating states will be expected to pick up the rest of the tab. Muñoz said legislation would be needed to approve the plan and repeatedly declined to say how much it would cost, saying more details about the funding source would come in the President’s budget for the next fiscal year due next month.

“This is a moment that is equivalent to the moment when we made high school universal,” Muñoz added.

The proposal would undoubtedly face opposition from the new Republican-controlled Congress. Muñoz did not say how the President hoped to pass the legislation through Congress, adding the White House had yet to run it by lawmakers on Capitol Hill.

In a statement, Cory Fritz, a spokesman for Speaker of the House John Boehner, said, “With no details or information on the cost, this seems more like a talking point than a plan.”

Read next: Why Defending Social Security Needs to Be Next on Obama’s To-Do List 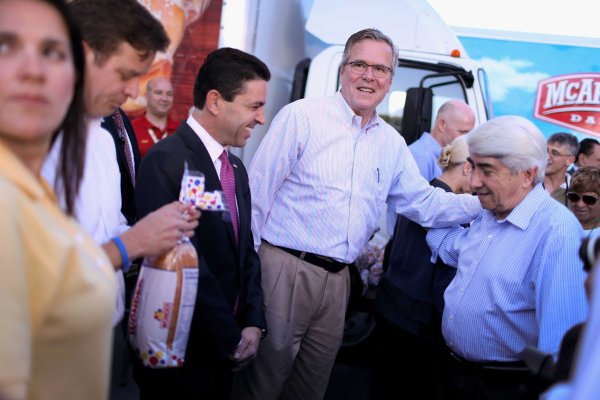 Jeb's Shock and Awe Catch-Up Campaign
Next Up: Editor's Pick