Most people know Scott Foley for playing lovelorn spy Jake on Scandal, but the actor is more of a comedian at heart. He is working on a script for a TV comedy for Shonda Rhimes’ production company Shondaland (which also produces Scandal, Grey’s Anatomy and How to Get Away With Murder) and his directorial debut, Let’s Kill Ward’s Wife is a comedy, albeit a dark one.

Let’s Kill Ward’s Wife stars Foley, Patrick Wilson and Donald Faison as a group of guys who fantasize about murdering a friend’s disliked wife. When that daydream accidentally becomes a reality, the group must figure out how to cover up the crime while growing up and confronting parenthood. If the premise sounds bleak, it’s because Foley says he’s always enjoyed making people uncomfortable with dark jokes, even as a small child. Foley talked to TIME about his sense of humor, his new movie and how he thinks Jake measures up to Fitz on Scandal.

TIME: How did you come up with the idea for Let’s Kill Ward’s Wife?

Scott Foley: It was about three or four years ago when I wrote the script, and I had my first child and was sort of struggling with this time in my life as a new father where I was growing apart from a lot of my friends. A very interesting thing happens when you reach a certain age where your friends who probably were your family when you were in your 20s and maybe even early 30s start to sort of branch off and make their own families, and you lose contact with them.

I was trying to figure out what the cause of that was, and the cause in my mind was spouses. Whether they didn’t get along with mine or I didn’t get along with theirs, there was always this new person in the equation. And I found some of my friends in these sort of terrible relationships they couldn’t get out of. I had the idea to write a script based on that time in your life, and I thought it would a very heartwarming. Two weeks later, I looked up and I had this really dark comedy where we end up killing one of my buddy’s wives.

I sheepishly gave the script to a couple of people thinking, “Oh God they’re going to hate this,” and the response was actually pretty good.

So it seems like everybody actually has these underlying feelings.

Yeah or at least the feeling of wanting to do anything you can to save a friendship during this phase of your life.

Were the characters partly based on people in real life?

No. The characters were wholly fabricated. Some of the situations were based on conversations I had had with friends. But no, the characters themselves, thank God, were not.

You talked about wanting to write about this struggle transitioning from our lives with our friends to getting married and making our own families. There’s been an ongoing conversation about the death of adulthood in American culture and how an anxiety about growing up pervades our movies and TV shows. Does that feeling ring true to you?

It seems to me that adulthood is being put off longer and longer now. It used to be when you were 18 you were an adult. You could go fight in a war, for the longest time you could buy alcohol at that age. Times have changed. People still live with their parents into their late 20s, whether it’s economic or it’s just more socially accepted now. I think the shift into adulthood happens around the time you start your own family, and that’s happening later and later.

The men in this movie still very much want to live in that period of time where it was just, you know, the guys. And once you have a kid, that’s a pretty unrealistic scenario. We all have to grow up and make lives and families of our own, and this is just one look at one of the realities that come with doing that.

I found the older I get—and it may be this way for women as well, but it’s true for men especially—it’s hard to make new friends when you get to a certain age, you know? You have responsibilities between work and family, and you want to dedicate the time you do have to your kids. So losing friends at any age is very difficult but losing friends when you’re not making any new ones is even more difficult, and I wanted to look at that as well.

Obviously this is a dark comedy. Where would you say you get your sense of humor from?

I was always the kid who laughed in church. I laugh at inappropriate times, as I think a lot of us do. I am a person who finds the humor in a dark situation. I don’t know whether it’s a coping mechanism, but I’m very self-deprecating and I think that has helped me along the way.

Has there been a particular experience where you had to use your sense of humor to cope?

This is going to sound horrible, but I think it probably started when I lost my mother at an early age. I like humor that makes people uncomfortable. I can’t believe I’m saying this, but for years, kids would make those jokes, like, “Your mother does this” or “Your mother does that”—that juvenile slang. And I would always get this very serious face and say, “My mom’s dead.” It would throw people into the most uncomfortable awkward silence, and that to me is hilarious.

And that is kind of the tone of the film.

Very much so, and you know it’s a hard tone to get in a film. We worked hard to make sure the tone was consistent throughout the film. It’s a difficult thing to achieve, but I’m pretty proud of the result.

You are also in the process of writing a TV show for ABC that’s being produced by Shonda Rhimes’ company Shondaland—a marriage comedy. Can we expect similarly dark humor?

No. Thank goodness, I think. You have to know who your audience is. You make a film knowing not everybody’s going to love it and put it out there on your own. But this show that I’m writing is for network television and owned by the Disney company. So there are certain parameters, and you have to sell to that audience.

So this is a much more lighthearted. It’s a sitcom about a man and woman on the eve of their wedding, and the toasts that are given to them at their rehearsal dinner are how we, through flashbacks, learn about their relationship and their family and how they go to where they are in interesting, funny ways.

That seems very different from Scandal. Some of the characters do truly awful things to each other on that show. Do you think working on such a dark show affects how you write movies or shows?

That’s an interesting question. I’ve been an actor for many, many years. I guess most people know me for Scandal now where I play a dark character who has this secret, subversive government job as a spy. But before that I was the happy guy on Scrubs and the other guy in Felicity. So as an actor, I really respond to the part that’s written for me and dive head first into that. As a writer, it’s completely separate.

Now I am sure on a level that I’m not aware of playing Jake has some effect on me. Jake had this really horrible scene where he killed James on Scandal, and that was difficult for me to do, to get to that place. And I’m sure my wife would say, “Jesus, he’s an asshole when he comes home after doing a scene like that.” But I’m not aware of it.

Scandal starts again on Jan. 29. In the last episode, Olivia was kidnapped from under Jake’s nose. Do you know who did it yet?

I know exactly who kidnapped Olivia.

Ah! Then don’t spoil it.

It seems like this might change the dynamics of the love triangle between Jake, Olivia and Fitz. Fans still seem to want Olivia and Fitz to end up together. Do you ever wish that Jake would just cut and run?

[Laughs] I do wish that sometimes. But not really because as much as all the fans think Olivia and Fitz are meant to be, I think that Jake truly believes that Olivia is the one for him. As frustrated as he can get and as much crap as he can take from Olivia, I think that he needs to stick it out, you know? He needs to make sure that she sees what he knows to be the case.

But keep your fingers crossed for Jake. One way or another, we’re going to find out what happens with the three of them. 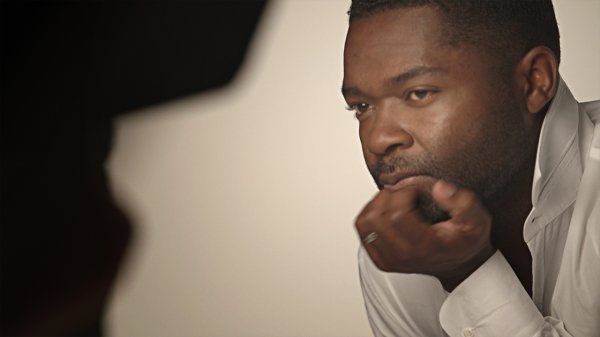 Go Behind the Scenes of David Oyelowo's TIME Photo Shoot
Next Up: Editor's Pick