People raise pens and signs during a vigil to pay tribute to the victims of a shooting by gunmen at the Paris headquarters of the satirical weekly Charlie Hebdo at Trafalgar Square in London on Jan. 7, 2015
Suzanne Plunkett—Reuters
By Catherine Mayer / London

Out of the horror came something beautiful. Not all of the people who traveled to London’s Trafalgar Square, or attended similar vigils in other cities and countries throughout Europe, could explain why they felt impelled to come. They just knew that they wanted to stand together, not only to protest the slaughter at the Paris headquarters of Charlie Hebdo, but in some way to continue the work of the French satirical newspaper. Its editors, writers and most famously its cartoonists had regularly challenged those who sought to stifle freedom of expression.

As the news of the attack spread, the hashtag #JeSuisCharlie — “I Am Charlie” — became a declaration of solidarity, and the vigils organized and publicized on social media offered a way to make that declaration substantial.

“I saw the pictures on television,” says Marie Proffit, a Frenchwoman working in London as an arts-project manager, “and I needed to do something with these feelings.” Her English friend Leanne Hammacott, who works at the Cultural Institute at King’s College London, pointed her to Facebook pages calling for people to assemble in Trafalgar Square. By 6:30 p.m. they met up with each other and another friend, Tina Westiner, a German designer also based in the city.

They stood in near silence in a crowd of several hundreds under Nelson’s Column, the 19th century memorial to the British Admiral Horatio Nelson, who died fighting the French and the Spanish. But on this evening history bound rather than divided. Members of the crowd held up pens — mightier than the sword — and flowers and placards: “Je Suis Charlie.”

Less than a minute away at 10 Downing Street, the leaders of two European countries who have not always seen eye to eye also focused on common ground. Germany has taken on the 2015 presidency of the G-7 group of nations and its Chancellor Angela Merkel had arrived in the U.K. on Jan. 7 to meet with British Prime Minister David Cameron. On the agenda was a weighty palette of issues, from the fight against Ebola to the stuttering economy and the sharpening crisis in the euro zone — and of the European Union itself.

The E.U. evolved from a project designed to create peace. But these days the union is increasingly a source of friction, between countries and within them. Conflict has returned to the continent. Over dinner the leaders planned to discuss Russia and Ukraine. “There’s still time,” Cameron said at a joint press conference with Merkel, “for Vladimir Putin to change course.”

He and Merkel put on a united front, and especially as they reflected on the horror in Paris. The U.K. security services MI5 and MI6 had given the leaders a joint briefing, who in turn emphasized the importance of international cooperation in combating terrorist attacks. Both leaders also spoke of the importance of upholding free speech.

“There is no one single answer to these appalling terrorist attacks,” said Cameron. “We have to all be vigilant. We have to try to address all the problems of radicalization that have happened in our country. But as we do all these things, we must be very clear about one thing, which is we should never give up the values that we believe in and defend as part of our democracy and civilization and believing in a free press, in freedom of expression, in the right of people to write and say what they believe. These are the things we are defending. We should be very clear on this day that these values that we have are not sources of weakness for us, they are sources of strength.”

#JeSuisCharlie. We all are. 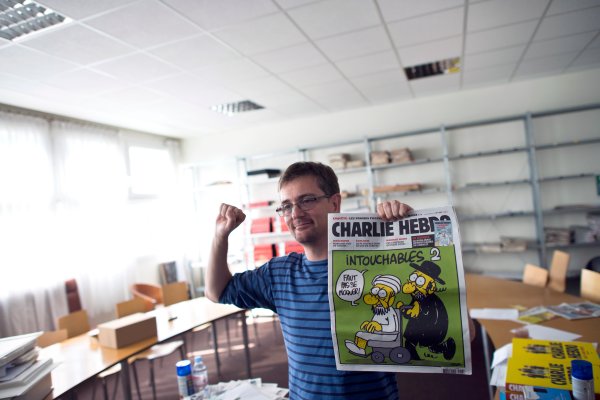