Colorado Springs police officers investigate the scene of an explosion on Jan. 6, 2015, at the NAACP's offices in Colorado Springs, Colo.
Christian Murdock—AP
By Josh Sanburn

The bomb that exploded outside an NAACP office in Colorado on Tuesday was a rare act of violence apparently aimed at the civil rights organization. But the incident in Colorado Springs, which is currently under investigation by the FBI, brought to mind an earlier era when threats of assassinations and bombings targeting the group were far more common.

An improvised explosive device detonated at about 11 a.m. Tuesday morning outside the NAACP’s Colorado Springs branch. No one was hurt, but nearby business owners and neighbors were shaken.

MORE: Rep. John Lewis’ Oral History of Selma and the Struggle for the Voting Rights Act

Gene Southerland, the owner of Mr. G’s Hair Design Studios, which shares a building with the NAACP chapter, said he heard a “horrendous explosion” at about 10:45 a.m. Tuesday that knocked several bottles off their shelves inside his salon. Southerland says he then stepped outside and found what looked like a 4-in. stick of red dynamite with the top blown off sitting next to a can of gasoline. Nearby neighbors told him they spotted a man leaving the area around the time of the explosion. The FBI is currently investigating the incident and looking for a balding Caucasian man in his 40s as the prime suspect.

Henry Allen, Jr., president of the Colorado Springs branch of the NAACP, says he’s hesitant to call the incident a “hate crime” and is waiting for a full investigation to be completed. He says his branch, the largest NAACP chapter in Colorado, Montana and Wyoming, has never received direct threats.

“That’s what has us a little bit confused,” he says. “Never in the history of this organization in Colorado Springs have there been live threats.”

But other civil rights leaders see the incident as almost certainly racially motivated.

“Obviously, this is a terrorist attack,” says Julian Bond, a University of Virginia history professor and a long-time chairman of the NAACP.

As head of the NAACP from 1998 to 2010, Bond says there were zero violent incidents like what occurred Tuesday in Colorado Springs. And in recent decades, acts of violence aimed at the NAACP have tapered off. But the organization has dealt with direct threats virtually since it began in 1909, with one of the worst occurring in 1951 when Harry Moore, who founded an NAACP branch in Brevard County, Florida, was killed on Christmas Day after a bomb was placed underneath his bed. No one was arrested, but several Ku Klux Klan members were suspected in the incident.

A little over a decade later, Medgar Evers, a civil rights leader and field secretary for the NAACP, was shot and killed in his own driveway after meeting with the group’s lawyers. Byron De La Beckwith, a white supremacist, was later convicted in the killing.

In 1989, Robert Robinson, legal counsel for the NAACP in Savannah, Ga., was killed by a package containing a pipe bomb. Similar parcels were sent to the NAACP branch in Jacksonville, Fla., but were discovered by local authorities before they were able to do any harm. A couple weeks later, on New Year’s Day 1990, white demonstrators protested outside the national headquarters of the NAACP, leading to heightened security at the organization’s offices around the U.S.

While the NAACP hasn’t experience incidents like what happened Tuesday in a number of years, the deaths of Michael Brown and Eric Garner, two unarmed black men who died in incidents involving white police officers, have heightened racial tensions around the country. Grand juries decided not to indict the officers, leading to weeks of protests nationwide and phrases like “I can’t breathe” and “Black lives matter” that were used to demonstrate against police officers’ use of force around the country.

Recent polls show that Americans increasingly believe race relations are deteriorating. A December 2014 Gallup poll shows that 13% of Americans believe “racism” is the most important problem facing the country today, the highest number since 1992 and the trial of Rodney King, a black man whose beating by Los Angeles Police Department officers following a car chase was caught on video. Only about 40% of respondents in a December NBC News/Wall Street Journal poll said race relations in the U.S. were “good” while 23% said they were “very bad.” Just a few years ago, roughly 70% described race relations in America as good.

As the FBI continues its investigation in conjunction with the Colorado Springs Police Department, agency officials say it’s possible that the incident may not turn out to be a hate crime.

“We’re looking at all possibilities,” says Amy Sanders, an FBI spokesperson in Denver. “Although a hate crime is certainly one possibility, or domestic terrorism.”

Rep. John Lewis (D-Ga.) also commented on the bombing on Twitter Wednesday afternoon by recalling a darker time for the civil rights organization.

And Bond, the former NAACP chairman, said that while acts of violence are unusual today, all chapters should remain cautious.

“You always have to worry about it,” Bond says, referring to incidents of violence. “All of our branches are potentially vulnerable. We want to send a message to everyone to be on their guard of this occurring to them.” 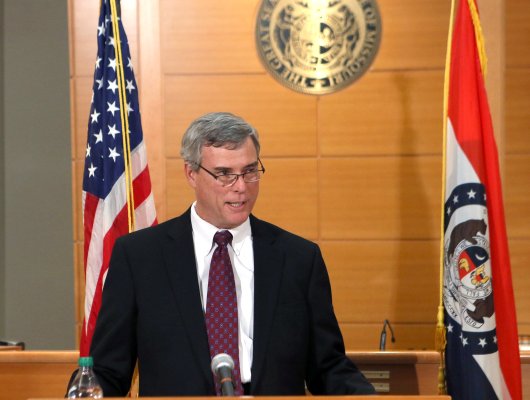 Ferguson Grand Juror Sues to Talk
Next Up: Editor's Pick