Charlie Hebdo Writer: 'We Knew That the Threat Was Real'

Cartoonist Antonio Fischetti speaks to journalists in front of the offices of French satirical newspaper Charlie Hebdo on Nov. 2, 2011, in Paris after they were destroyed by a petrol-bomb attack overnight
Alexander Klein—AFP/Getty Images
Ideas
By Coralie Schaub

Just after the attack that left at least 12 people dead at the offices of the French satirical newspaper Charlie Hebdo, Antonio Fischetti, a journalist for the paper, spoke with Coralie Schaub, a Libération staff reporter. His remarks follow:

“We knew that the threat was real, but we weren’t paranoid. Threats against Charlie were recurrent, continual, habitual. There weren’t more recently, and the vigilance had been relaxed. After the fire that destroyed our offices in 2011 [the paper was firebombed after publishing cartoons lampooning the Prophet Muhammad in what Islamist groups said was an act of revenge], there has been a police car outside in front of the paper. At first, it was there all the time, and then during the editorial meeting on Wednesday mornings. But for some time, a month or two, it hasn’t been there. The attackers must have noticed. They really waited for the right moment. Even though there was a code to enter the building, even though you had to know that the newspaper was on the second floor, it was easier to get in to our current offices on Nicolas-Appert Street than it was at our previous location, on Serpollet Street.

Charb [editor in chief, Stéphane Charbonnier] still had his two bodyguards. When he came to have dinner with me, we joked a little about them. I asked him: ‘Well, where did you leave your two bodyguards?’ Once he took a taxi without them. The driver recognized him and asked him to get out right away. The bodyguard told him to never take a taxi alone. He even went on vacation with the guards.

We all said that someone a little crazy and determined, with a Kalashnikov, could go after Charlie. We all knew that Charb might be targeted, he had already been directly targeted by al-Qaeda on the Internet. The idea that we could be killed one day was always in our minds. But carnage of this magnitude, with the desire to kill everyone …

The miracles are those who were late [to work], like Luz [Renald Luzier] or Catherine Meurisse. Or absent like me — I was at a funeral outside Paris. We were friends, not just colleagues. I was particularly close to Charb and Tignous.

They wanted to completely eradicate a newspaper. This is not ‘just’ kill the editor. There are no words. This is really an act of war. All for drawings … they are sick. Charlie had a mission, supported by some, opposed by others. I am even more aware today how important this fight is. We were all in agreement that we should not give in. But they decided to eradicate this symbol of freedom that was Charlie … I talk about it in the past, because I do not see how the newspaper can survive this. Charlie was a newspaper of cartoonists. The writers, like me, are interchangeable. Them not. The Charbs, Tignous, Wolinskis — there are not even 50 like them. Not to mention Cabu.”

This account was excerpted and translated, with permission, from an article that originally appeared in Libération on Jan. 7. You can read the original story here. 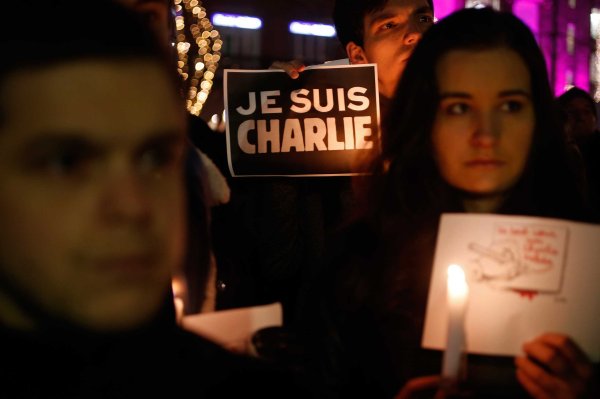 Freedom of Speech Is of No Use Unless We Exercise It
Next Up: Editor's Pick