A container holds a Peptide that contains a potential new drug candidates for testing against a part of Ebola that is vulnerable to drugs, at the University of Utah on Oct. 14, 2014 in Salt Lake City.
George Frey—Getty Images
By Alexandra Sifferlin

Scientists have started testing an experimental drug for Ebola in a Liberian hospital.

University of Oxford researchers have launched a trial of the drug, brincidofovir, in Doctors Without Borders’ Ebola center in Monrovia. The drug has previously been used to treat patients with Ebola in the United States, like Thomas Eric Duncan, NBC cameraman Ashoka Mukpo, and Dr. Craig Spencer.

When patients at the unit are informed they have Ebola, they will be offered the opportunity to participate in the trial. Patients who volunteer will be given two weeks of brincidofovir. The researchers estimate there will be about 140 participants. “Typically it takes over 18 months to start a trial. Here we have done it in less than four months,” Trudie Lang, an Oxford University professor, said in a statement. “Everyone has pulled together to make it happen—a Herculean effort by all those involved.”

MORE: TIME Person of the Year, the Ebola Fighters

The drug, which was originally developed for other viruses, has shown promise fighting the Ebola virus in test-tubes, but it’s nearly impossible to know whether the drug has been of any use in the small number of patients who have tried it.

Brincidofovir is manufactured by the pharmaceutical company Chimerix in Durham, N.C. The trial is funded by the biomedical research foundation, the Wellcome Trust.

To date, 20,712 people have been infected with Ebola during the current outbreak and 8,220 have died. 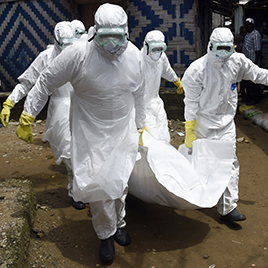 U.N. Official Says Ebola Can Be Beat in 2015
Next Up: Editor's Pick